Join me right now for this Week’s Live Q&A Chat happening on the Trading With Cody app or at https://twc.scutify.com/members.

The broader stock markets have spent the last two years going nowhere. Take a look at this DJIA five-year chart: 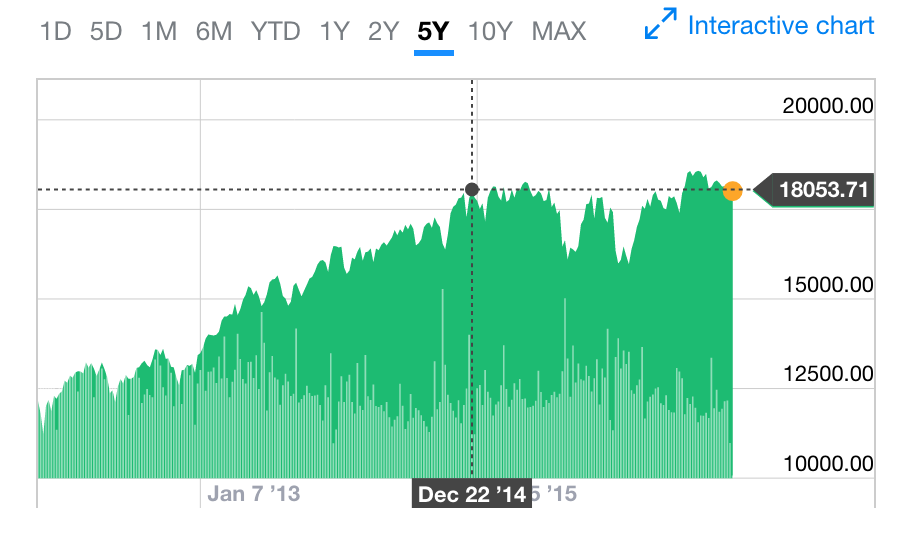 At some point, after years of people focusing on “The Fed’s Next Move,” only to find that there is no next move from the Fed, you’d think CNBC, traders, investors and pundits would give up on it. The Fed’s next move? More propaganda, more jawboning, more conflicts of interest, more of the same ultra-low interest rates that only giant corporations and global banks get to benefit from.

Are you scared about the election? Do you hate both candidates? Do you hate one candidate worse than the other? If that “other” candidate wins, do you think the economy and stock market are in big trouble? Guess what. That’s what most traders, investors and money managers seem to think right now. Meanwhile, either candidate is extremely corporate and banker and stock market friendly and of course so is the Republican Democrat Regime writ large, which will remain in power no matter which candidate wins.

Frankly, I expect that we’re likely to get another leg higher in the DJIA and stock markets as we head into year-end and that 2017 could be set up as a breakout year for the major indices, taking the DJIA to 20,000. That’s only about a 10% move higher from here, so it’s certainly not a wild forecast that the DJIA could hit 20,000 next year. Then again, maybe it is a wild forecast, as the bulls seem to have grown timid, the bears are growling and getting confident in their own “The markets are finally going to crack, really, really this time, for sure!” rhetoric once again.

Google, Amazon, Apple, Sony, Nvidia, Facebook and other of our stocks have been on fire despite the struggling indices. I thought we’d have a correction into the election, but Hillary’s dominance in the polls has the made the outcome fait accompli and the market is pricing a Hillary victory in as such. Maybe we get a sell-the-news reaction around/immediately after the election now. As you know though, I remain positioned for a continuance of the Bubble-Blowing Bull Market despite having raised cash in recent weeks and months.

All of this is yet another reason that we focus on individual stocks that can wildly outperform the broader indices. Here are a couple updates on that front then.

Herbalife delivered another weak earnings report and more importantly, Herbalife keeps guiding lower, keeps lowering the bar, keeps underdelivering, keeps blowing smoke with hype and distractions from the fundamentals. I’m still short and not covering. I invite you to read the edited transcript from their conference call last night to get a better idea of how big the challenges are ahead for this company and how much they are promising those challenges to be no big deal. As a subscriber wrote: “I know it’s not the goal to hit absolute tops or bottoms but huge kudos on the HLF call. We hit the absolute top on that one based purely on your analysis of the false premise at the time.” Here’s the link to what I wrote back when we initiated this Herbalife short a few months ago when everybody and the company itself declared “victory” when they’d actually lost.

Pandora’s been hit hard and we’ve profited nicely on our short position once again. Recall that I added to my Pandora short a few weeks ago when the stock was on fire and back close to $15 a share. It’s quickly fallen back to my single-digit price target and I’m likely to lock in some of those profits on this short soon.

Lead Balloons, Clean Dirt, Obvious Black Swans and Easy Portfolio Solutions Don't Exist
NYC Trip, Why I'm not buying DVN and other notes
I've bought a big chunk of Nuance so far...
Everything You Need To Know About Analyzing A Stock
The pullback is here. Some analysis and ideas for this market