Q. In the last 4 months the only recommendations on longs I see are $SEDG, $TST & $PI. Correct me if there are others, but that seems to me like very little trading for the second half of the year.

A. One of the reasons I’ve had a lot of success investing over the years is because I have bought Revolutionary companies when they’ve been cheap/hated/being trashed. I didn’t buy any of those four names in hopes of a swing trade into year-end and I’ve added to some of them, as you know. I’m certainly going to make mistakes ($FIT comes to mind), but we’ve had a great year and pretty amazing five years since I came back to trading and started TradingWithCody.com.

Subscriber follow-up:  Thank you for your response. I’m not questioning your success. I have only been with the TWC family for a little over a year now, so I can only speak to the successes over that time period. You definitely had some big wins over that time period. My point is, there has been many sectors doubling or tripling the last few months when there has not been much action in our playbook.

Another subscriber comment: @CodyWillard writes “but we’ve had a great year”. Absolutely! I joined in January – $SNE, $QCOM, $AMZN, $LGF, $AXGN, $AMBA, the $HLF short are among the position I never would have been in – yeah, $FIT didn’t work but you keep anywhere near that ratio going and it’s all good! And of course I forgot our biggest winner this year: $NVDA. Thanks for everything you do.

Cody’s response: Thanks. Yes, the hardest hit and/or most underperforming sectors like energy, commodities and banks have been on fire for the last few weeks and I have long avoided those sectors and am not in a rush to join their bounce.

Q. What if the market doesn’t get to the levels on the stocks that you mentioned you would like to buy more of. Are you just going to stay pat?

A. Just have to see what pitches are in store. Remember that we’ve got a bunch of stocks that we’ve been long for months or years, almost all of which are up several hundred percent, and I think there’s still upside to those names so we hold and/or add to them at times.

Subscriber comment: I’m super paranoid that the bubble will burst  and I will go through the pain that I did in 2000. That’s the biggest mental obstacle,  but that’s why i subscribed here. Cody is investing in tech themes that develop over time and unfortunately for him and us don’t go up in a straight line.

Q.Hi, Cody. $P seems to be hanging up there. Think this move has more reality/staying power than in the past? Alternately, see my comment below: I’m holding no $P shorts now. (Made out fine with it earlier; thanks.)Make any sense to initiate one, or is it watch and wait?

A. I mentioned a couple days ago that I’m staying short $P and that David Faber, who “broke” the story that someone might be interested in buying $P didn’t seem to believe his own reporting either as he said something along the lines of “these discussions are just barely getting started and I hesitate to report on this but I only do it so someone else doesn’t report it inaccurately” or something like that. I think $P is headed into the single digits in the next year.

Subscriber follow-up: And further support for your thinking re $P: shares are unavailable to borrow to short, except at elevated loan interest. So I’ll chew on it for a while . . .

Q. $GIMO has been hit hard here recently. Any thoughts?

A. $GIMO is one of the new names I’m working on in depth, and will let you know asap, if I buy any.

Q. $PI‘s performance today and yesterday are an excellent illustration of why we we need to have a longer view of Cody’s trades. Sometimes, in fact, it may just be better to turn the screen off, if it makes us feel too bipolar.

A. Amazon’s RFID grocery store. Whether Amazon is using $PI‘s technology or not is questionable at this point, but the future of retail brick & mortar stores is $RFID chips.  Here’s more on $PI/$AMZN effect.

Q. $AMBA getting waffled, down over 9% pre-market and closing in on Cody’s buy level of $55. Cody, would you buy some here? Is this a bit of an over reaction?

A. Not in any rush on $AMBA, that $55 number was just a rough guideline of a place I’d start looking at it again, especially if it were during a market panic. Which today’s $AMBA drop isn’t. Just holding my$AMBA shares steady for now.

Q. Why the divergent between the $DIJA and $COMP?

A. Some of it is rotation from tech to infrastructure stocks which the $DJIA is heavy on.

Cody: On another note entirely:Holy cow that 1-year $X US Steel chart is insane. Me wants to short/buy puts, but I won’t. 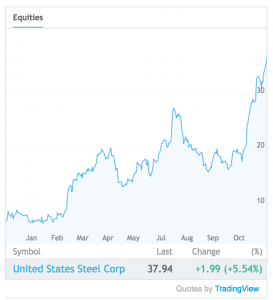 Cody’s response: This made my day, thanks.

Ok folks, that’s a wrap. I’ll be around today and most days for any additional questions or comments.

Cody Kiss & Tell: Economy, Trump & the markets, Nvidia, Gold, and more
Staying cautious in this Baby Shark Market
Yes, it's a bubble. When will it pop? Cody's Latest Positions
I've got a new name I'll be pulling the trigger on tomorrow...
Trade Alert: Spotting a Musical Revolutionary Investment