Subscriber comment: … it’s not that hard to be disciplined about trimming and/or sitting on some cash ….(when you have the experience)” It’s interesting and important that you make this point now. Practicing being successful at investing is the reason I am here, to learn the patience, rhythm, ‘the feel’. I’ve been doing the difficult (for me) task of trimming. Kudos.

Q. Thank you ..New question for you Cody ~ Is there a sector right now that you think is better poised to be a leader in the first quarter of 2017 and if so, do you have any favorites outside of your TWC picks? 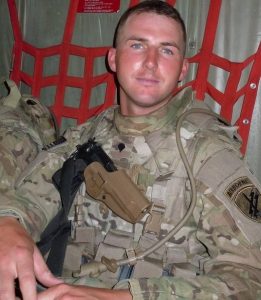 Subscriber follow-up: Sorry for the enlarged photo Cody, I tried to shrink it but as they say int eh Army, it was a SNAFU!

A. I have no idea how I’d go about picking a sector that might get rotated into more than others in the next 90 days…but feet to fire, I guess I’d guess that, if the $DJIA stays near or above 20k, it’d be big cap tech as people rotate back to it.

Cody:  Wow, cool pic. Is that a shot of you about to jump out of an airplane as you help defend our country? Thank you for serving, if so!

Subscriber: We didn’t have to jump. That plane had our Wolfhound unit landing in Bagram Airfiled…The smiles across the board were bigger on the flight out of Afghanistan though!!

Cody: Are you home for Christmas?

Subscriber: Yes, we’re all back now and some are at the base in Hawaii but most are in California now.

Cody: I’ll pray for you and your family and your fellow soldiers. Thank you again. We’re honored to have you in the Trading With Cody chat room. Spread the word that we give TWC for free to any active military member. Peace.

Q. Morning/afternoon (depending), Cody. Lemme get a sense of your (excellent) logic/practice. Does the logic behind the fact that you’re recommending selling perhaps 10% of $NVDA and its gains (which I did; thanks for the advice) mean I should never add another tranche to my holdings unless there’s a dip? I never felt I had enough $NVDA, and now (with my 10% “divestment”) I have less. What if it now hangs in or continues its growth?

A. You’ll always, always, feel like you don’t own enough of the ones that go straight up like $NVDA. As for when we might add another tranche instead of trimming one, all we and can do in that regard is what and see what the markets give us. In a few months, if the growth/profit outlook for $NVDA is even stronger than it already is but the stock is barely up from here, I might add a small tranche. Likewise if it drops 30% on no change in its growth/profit outlook, I might add another tranche. For now, I’m trimming 10% of my $NVDA common stock long.

Q. Why do you rate $QCOM as a 6? Do you think that its heyday is past? Mobile IP is the bread and butter and moving into the auto market is an admission that it needs a new direction?

A. The 6-rating for $QCOM is just near-term. The market might want it to get through the acquisition before it goes up steady again.

Q. Have you had any more thoughts on $GIMO? It’s come down from $61 to $48 this past month or so when everything else was going up it seems.

Q. I still have some $NFLX.  Do you think its upside is limited at this level?

A. If $NFLX remains the de facto standard for consuming video over apps, it’s going much higher still. But it’s just so darn expensive, there’s huge downside if they fail.

Q. Hi Cody, Hope all is well. A while back you mentioned you would revisit $UA if it visited the mid-20’s. It’s there. Any interest ? Thank you.

A.  Yea, I’ve been watching $UA and doing more homework on it, but it’s still trading at 41x NEXT year’s earnings and still too expensive for me to buy for now.

Q. I know it is not easy to game. I have some $SPX puts ending Jan 20. Should I push those hedges out? Do you think feet to fire the market grinds higher over the next three months?

A.  I think the market bounces around 20k for the next three or even six months, just to mess with bulls and bears alike.

Subscriber follow-up: Similar to the latest leg higher where the market slowly went down to support before the recent pop?

Q. Speaking of hydrogen and cars, remind me. A few years ago, you/we had a water-related stock (it had a L in the symbol) — and somehow i thought it was tied in with fracking. In anything about that, pro or con, resonant now?

A. That water stock was $LNN. And as I recall we caught the first leg up in this chart a few years ago and sold the shares for a profit. Looks like it’s still in the same range it’s been in for three or four years now. Down 10% today for some reason that I don’t have the time to look into right now since it’s no longer on my radar anyway.

Q. Has your thesis on $TWTR changed now with more high-level management departures and Dorsey’s continued desire to run 2 publicly traded companies at the same time? Thank you.

A. I didn’t like seeing the news that there’s more Brain Drain in the executive ranks at $TWTR, but I’m not ready to give up on it as a platform yet, as I think it’s integral in many media and celebrity businesses these days. Ala my own IAm App Platform.

Q. Back to a perennial favorite for commentary/questions: $P. Now that it’s been hanging up there, do you feel the Sirius “rumor” has more validity and is it still a viable short? Still see it as a single-digit stock?

A. I would immediately send out a Trade Alert as I would cover my $P short if I thought it was going to be bought out at a premium.

Q. I was fortunate enough to catch most of the recent $PI gains, and it has moved up to about 20% of my portfolio. I hate to trim so early, it looks like options are too thinly traded, and it just seems like this one has a long way to go over the next year and more.Would you trim 5% and put it into some of the beaten down name in the portfolio, if so which ones? The hardest thing to do is to hang onto these high fliers for long term gains.

A. I’m not rushing to trim my own $PI just yet but if I had 20% of my portfolio in it, I sure would consider trimming 20-30%. You don’t have to rush to put that cash to work either, but slowly add some to some of the other highest-rated stocks in the portfolio and/or the new name I’ll be sending out tonight.

Q. Do you think that hydrogen cars make any sense as an investment for us? I have no idea of who to invest in.

Q. Wouldn’t you want to go long on rope then? Something is going to have to keep those cars down.

A. Haha. Rope might make sense to invest in some day. Like 150 years ago. Ba dum bump. With hydrogen cars and rope, like all things, investing in them is all about the timing!

Q. What is the reason for the recent rally in Inpinj ($PI)? Did the masses suddenly notice it for no discernable reason?

A. Impinj $PI does business with $AMZN and it appears that Amazon’s new grocery store in Seattle that charges people when they walk out of the store automatically for every thing they’re leaving with is probably based on $PI. Not sure yet tho.

Q. Hope you and family are doing well. What is your outlook on the FANG stocks next year?

A. I don’t know how to try and game four individual stocks’ action over the next 12 months from this particular point and price in time. I own $FB, $AMZN and $GOOG as I have for years and don’t plan on that changing in the next 12 month. 🙂

A. Think about how far away from the buying and selling of stocks by millions of people, money managers and high frequency trading programs every day when we start postulating that some subsector of that group might or might not be postulating that the tax code might or might not be relatively more favorable in coming months than it presently is…and you can see why I haven’t done much commenting on tax-selling or non-tax-selling dynamics in the stock market.

Subscriber comment: Personally, I think there’s a subtle difference between “euphoria” and getting bets down for what many are anticipating to be a 4-8 year business friendly political environment. Those bets could certainly turn out to be wrong but there’s at least a plausible thesis underneath – it’s not like this is the dot com craziness where everyone just lost their minds.

Cody’s response: I’m not sure I agree with this, but it’s an interesting explanation of the current mindset/reasons behind the markets having gone thru the roof for the last few weeks: “Personally, I think there’s a subtle difference between “euphoria” and getting bets down for what many are anticipating to be a 4-8 year business friendly political environment. Those bets could certainly turn out to be wrong but there’s at least a plausible thesis underneath – it’s not like this is the dot com craziness where everyone just lost their minds.” Thoughts et al? For example, it turns out that if you bought any of the big dozen or so dot com stocks back at any time from 2000-2002, you still would have made huge money in the next fifteen years, precisely because the dot com thesis was CORRECT. On the other hand, the market sure seems to be trying to price in a lot of tax cuts, fiscal spending and other giant corporate welfare programs that might or might not happen in the next four or eight years at all.

Ok folks, that’s a wrap! Peace to you all. Happy holidays. Merry Christmas.

Free snacks, energy vs stocks, and the Great Corporate Debt Bubble
Let's do this...
Heading home with lots of new insights
Prepare for the next time you feel stupid
Market open and another new book: 10 Tech Stocks for the Next 10 Years