I have a Revolution Investment stock pick that I want to add to the portfolio. It’s called Gigamon, the symbol is GIMO, and here’s the story.

Hackers, cyber threats and the giant move to the cloud is making network security more important than ever. As a pure play on that, Gigamon’s website explains why their products and services are leading the way.

Basically companies like Amazon use Gigamon’s products and services to monitor, protect and learn from their cloud services. That’s right, Gigamon is set to grow along with the cloud market leader, Amazon Web Services. Of course the company is growing its customer base too. The company gets a lot of long-term visible recurring revenue from their customers and that recurring revenue typically sees higher margins over time too.

Gigamon came public three years ago near $20 a share and has since become nicely profitable with 30-50% annual topline growth rate which might slow down to a “mere” 25-35% or so this year. Analysts expect GIMO to earn $1.26 this year, up from 80 cents last year. And GIMO should earn more than $1.50 this year, and up to $2 per share if they really deliver on strong growth and margins.

Let’s split the difference and call it $1.75 for next year’s likely earnings per share. The stock is currently around $47 and that gives us a forward P/E of about 26. The company’s balance sheet is beautiful with $6 per share net cash, giving us an enterprise value to earnings ration of 23.

I think this company could earn upwards of $4 per share in another five years from now. Throw a 25-30 P/E on that number, and you’re looking at a potential $100-120 stock in a few years.

I’m starting to buy this stock today, buying about 1/3 of a full-sized position to get started. I’ll nibble some more shares in coming days.

Here are some additional notes from myself and my research associate, Liam Garrity-Rokus: 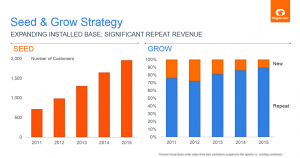 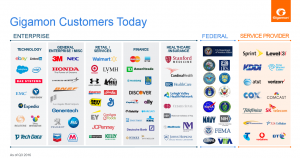 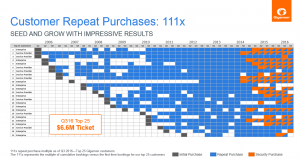