Nvidia, now up 5-fold since we bought it fifteen months ago as “New pick for the AI, VR and SmartCar Revolutions,” is yet another example of why we hunt for Revolutionary companies to get into before the rest of Wall Street does.

Indeed, in the fifteen months that we’ve owned Nvidia since I sent out “Trade Alert: New pick for the AI, VR and SmartCar Revolutions“, the company’s market cap has gone from $17 billion to more than $100 billion today as the stock has gone from $31 to $163. 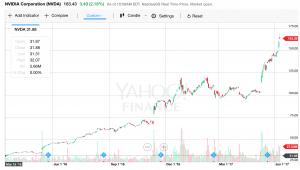 I’m going to trim 10-15% of my Nvidia today, locking in some 400% gains after 15 months. I’ll still have a nice-sized position in it, obviously, but want to sell a little bit into this parabolic move.

Trade Alert: Flow into the market's ebb
Trade Alert: I've Cut My Real Estate Holdings In Half
Trade Alert - Trimming the Triquint as we look to exit and lock in a huge win
Don't doubt the USA or mankind's ability to prosper
Trade Alert - Earnings recap and adding to Qualcomm