Well, I think it is time to cover my IBB short. The thesis behind shorting biotech and/or the healthcare industry seems to have passed for now. I have been bearish on biotech and healthcare since probably about two years ago right before biotech topped out and started its long decline. I was at a money show conference that focused on technology and biotech in late 2014. The IBB was at nearly $400, and just about to pop and everybody at the conference was bullish about biotech. You literally heard the CEOs up on stage talking about how bullish their outlook and how high the stock prices in the industry would climb. I think I actually angered some of them because when I got up on stage (I was hosting a panel with some biotech CEOs) and I was bearish and challenged the overwhelming bullishness.

I talked about how I did not think the people in the crowd should be investing in biotech at that particular moment. The reason then, as I explained and as you guys know that have been reading a long time, that I was so bearish and have been so bearish on biotech and healthcare has been that I thought there’d be some serious pricing scrutiny to come down on the industry. Don’t get me wrong, the Obamacare bill was written by the lobbyists and the attorneys and the business guys in the giant healthcare and biotech corporations. The Obamacare system was put in place as much to maximize profits for the healthcare and biotech industry as it was to provide health care for millions more Americans. I just have thought there was going to be a politically-motivated serious backlash against this profiteering.

You did see some of that. We nailed the VRX short, the Valient short. When we shorted it at $170 on the thesis that there was about scrutiny about their prices. And at least in that company’s case and some of the others who were just rolling up traditional old drugs and ramping up the pricing 5 or 10 fold to increase revenues, profits and margins, there was some serious scrutiny.

There was a backlash against that. But now? No backlash, certainly not with the new Republican healthcare bill that never seems like it is going to get passed. It just sort of seems like we know that Obamacare is very bullish and they are never going to go back and reduce corporate profits in health care in the next few years. The last thing the Republicans are going to do is scrutinize the profits at these companies. The Republican healthcare bill enables more maximizing of profits. It takes the Obamacare bill that was all about helping the profits of the healthcare and biotech industry and making it even more profitable for them. Whether the Republican Repeal and/or Replace bill passes or not, there is not scrutiny about the prices in Obamacare. That is the last thing on anyone’s mind at this point.

So, without scrutiny on the pricing models, our thesis is probably wrong. I shorted this thing, I think around $315, and around $300 again at one time or two. It has been a good relatively short, frankly, because it is a hedge against so many of our huge winning longs. And we have so many long stocks that are up 50% or 300% in the last two years while I’ve been bearish and/or short the biotech sector as a hedge against those longs. In fact, Axogen AXGN, the biotech stock I bought at the same time I initially put the IBB short hedge on is indeed up nearly 300% from our cost basis vs the IBB being up 5% or so. 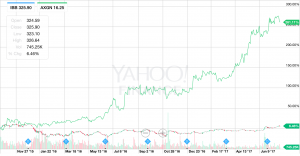 Upshot then, I am going to cover the IBB Biotech short today and I am going to cover my tiny remaining Valient short tomorrow. I had already covered 90% of the Valent short when I had 90% plus profits on it and now I still have nearly 90% profits on it and I’ll go ahead and lock those in. I will take a small loss on this IBB short position and look for the next good hedge for our portfolio of longs.

Trade Alert: Two nibbles and an update on my newborn
Trade Alert: INTC, BKS and AAPL updates
Trade Alert: Whipsaws, fear, two nibbles, one sell
How to dance at a rave (or why you shouldn't force trades)
Last week before LinkedIn.com came publi...