“I’m finally adding a new tranche of buying to my FB, adding just about 15-20% as much as I already own. I’ll be adding a little common and also to my January 14 calls with strikes about $30…

…I think we might finally be seeing this stock put in a bottom here below $20 a share.” 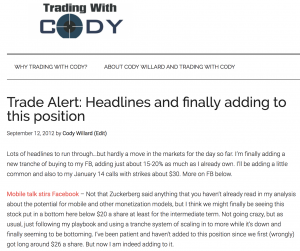 I still own FB and it’s obviously still one of my largest position as it has been for for five years now as noted in that article above.

Google: I bought Google when it’s market cap was less than $30 billion on the day it came public. Here’s when I made it one of my biggest positions:

I still own GOOG (and the GOOGL shares I got when they did that split) as one of my largest positions.

Amazon: I have bought and sold Amazon several times over the years and have made great money doing so. But as Trading With Cody subscribers know, not just buying and holding Amazon for the last ten years is one of the great regrets of my investing career. Anyway, I still own Amazon as one of my largest positions and I wish it was actually my largest but I don’t want to chase it right now.

Microsoft: I’ve owned Microsoft a few times over the years, but I haven’t owned it in several years. Which isn’t a bad thing considering that MSFT hasn’t really created any value for shareholders in the last 17 years even as these other four companies have created more than a trillion dollars of value for shareholders.

Finally, would you believe that Apple’s market cap when I bought it in March 2003 was just $5 billion as I wrote:

That means that these companies have created more than $2 trillion in market cap valuation since I’ve owned them over the last few years. (I’ve done well, but I sure wish I’d caught even MORE of that value they’ve created for us shareholders!)

Did you know that the entire market capitalization of every publicly traded stock in the US is $18 trillion dollars? These companies have created more than 10% of the entire US’s stock market valuation since I’ve owned them! That’s crazy.

More recently, I started calling FB, AMZN, GOOG and AAPL the new “Four Horsemen of Tech” back five years ago: 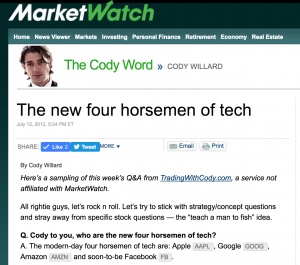 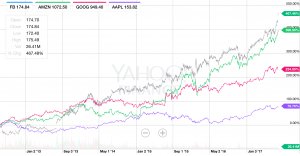 That chart shows how Facebook and Amazon have more than 3/4 of a trillion dollars of valuation in the last five years. That means they’ve created $400 million per day in shareholder value on average every day for the last five years (or 1865 days).

For the App Revolution and for these Four Horsemen of Tech, we’re talking about the creation of trillions of dollars of value!

Now where have I heard that this would happen? Oh yeah, I must have written that a hundred times from 2010 to 2012.  Here’s what I wrote back in 2011 more than a year before Facebook came public: 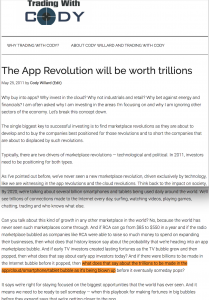 “By 2020, we’re talking about several billion smartphones and tablets being used daily around the world. We’ll see trillions of connections made to the Internet every day, surfing, watching videos, playing games, chatting, trading and who knows what else.

Can you talk about this kind of growth in any other marketplace in the world? No, because the world has never seen such marketplaces come through. And if RCA can go from $85 to $550 in a year and if the radio marketplace bubbled as companies like RCA were able to raise so much money to spend on expanding their businesses, then what does that history lesson say about the probability that we’re heading into an app marketplace bubble. And if early TV investors created lasting fortunes as the TV bubble grew and then popped, then what does that say about early app investors today? And if there were billions to be made in the Internet bubble before it popped, then what does that say about the trillions to be made in the app/cloud/smartphone/tablet bubble as it’s being blown up before it eventually someday pops?

It says we’re right for staying focused on the biggest opportunities that the world has ever seen. And it means we need to be ready to sell someday — when this playbook for making fortunes in big bubbles before they expand says that we’re getting closer to the pop.”

Honestly, I’m a bit awestruck with these valuations, with these headlines from these companies and, frankly, just how well we’ve been positioned for and continue to be positioned for these revolutions that are taking over the world and creating trillions of dollars of value for shareholders.

This is not a victory lap. This is a reminder to read that last sentence and know that we need to remain vigilant and cut throat because there will be a day when these things do go “pop”.

“It says we’re right for staying focused on the biggest opportunities that the world has ever seen. And it means we need to be ready to sell someday — when this playbook for making fortunes in big bubbles before they expand says that we’re getting closer to the pop.”

PS. One last thing I noted this morning. Facebook’s pop today added to $25 billion to its market cap, which is twice as much as Twitter’s entire market cap.

Transcript from today's chat...
Singularity, Hedging, Bailouts for college kids, Slack, Bitcoin & more
Avoiding losses is as important as making profits in the long run...
How to find dozens of 10-baggers by investing in revolutions
It's a green screen -- stop the presses...