The thing about the LTE Apple Watch is that it’s a major step towards a “phoneless” future. That is, in five years or ten years, the Apple Watch and other smartwatches will have so many features, capabilities, display options and every app/data/content you want will be so completely cloud-based that the teenagers and 20-somethings of that time won’t even bother owning a tradtional “smartphone.” People won’t talk about peak cable TV and cord-cutting any more. They’ll talk about peak smartphone and smartphone-cutting.

I’ll have more on this concept in coming days and months, but it will be largely driving by The Voice Revolution and the companies that are driving it.

Q. First question: I am in the IAm Cody app. How do I listen to the livestream? (I am over 30)

A. Steve, you need to swipe left until you get to the broadcasts screen on the app.

Okay, I have joined you.

Q. What is causing you to add to $INTC today?

A. Intel, I’m buying more now because I’m still just slowly building up the position and will nibble a little more again, probably, soon. I don’t like to buy all of a new position all at once and I actually don’t mind the stock dropping some after my initial purchase. Intel is slightly up from my first tranche, but it’s time to just nibble on a little more as I’m trying to build this position up over time. Intel is likely

Q. Do you like XLP Consumer Staples Select ETF and/or XLI The Industrial Select Sector ETF?

A. I always tell people that when it comes to ETFs, that it’s lazy way of investing. Because you’re not having to pick individual stocks. That said, I probably like XLP I like better than XLI because china is investing heavily in industrial verticals and margins for the rest of the world in those “industrial verticals” will be hit. Meanwhile the “Staples” sector of the economy will see hundreds of millions of more people lifted out of poverty and buying branded toilet paper and other staples. All that said, I’d much rather invest in truly Revolutionary ideas such as The Voice Revolution — it’s a little more exciting than The Toilet Paper Revolution or The Steel Revolution from 100 years ago.

Q. What about BAC and JPM?

A. I’m not a fan of big bank conglomerates. Much prefer regional banks, but I don’t invest in banks at all. I do sometimes short banks. Giant banks today are still so dependent upon emergency measures and subsidies from the government that I don’t like or trust their business model.

Q. Fed and Yellen tightening, does it matter?

A. It matters, but not for the reason most people think. Yes, it matters, but Flip It. For the long the last the more than two decades, whenever the Fed is in a tightening cycle, the market has typically risen and sometimes gone into bubble territory. Next month’s Fed move or lack thereof is a mostly distraction.

Q. Nice move this afternoon for BBRY on Delphi announcement….I believe Delphi also has an analyst day coming up so do you think there will be more to this strategy that could be the beginning of a run for BBRY.

A. Yes, it’s great that Blackberry is partnering with Delphi to create a self-driving car platform- that’s exactly what we’ve been wanting to see. That said, that’s just pudding for now. We need to see some proof that these new initiatives for Blackberry are actually developing into some products that sell! Over the next six months we will see if Blackberry’s car division gets back on growth or if it’s going to fall to the wayside like Blackberry phones did. Blackberry’s security-focus on their phones do provide some potential for a return to growth in that sector for the company too, of course. Especially as the demand for secure communications and cybersecurity grow in coming years. But again, we need proof!

Q. You recently dropped ambarella to a 6 due to disappointing earnings. Can you expand on your thoughts going forward?

A. Talk about needing proof in the pudding. Ambarella has not established that it truly can succeed away from the former important and now horrible customer to have — GoPro. Amba could be an M&A, though I would have thought someone would have already it bought, and more importantly, there’s potential demand for Amba components in all kinds of Revolutionary sectors like Robotics and iOT and self-driving cars and drones. But where’s my proof? Ambarealla probably has but two more earnings reports to prove they can get back to big topline growth.

Q. Speaking of NVDA, I wonder what Andrew Left’s latest position is.

A. $NVDA and Andrew Left. I think he covered for a few pennies before the latest NVDA rally steam roller steam rolled.

Q. Awesome to see PJ made your top 3!! My 2nd daughters middle name is Pearl. Have you seen them live? If not, they might get bumped to 1 on list once you see them

A. I’ve seen PJ several times live. Recently saw Eddie in a club in Boston for four hours with 500 people. See pic below. 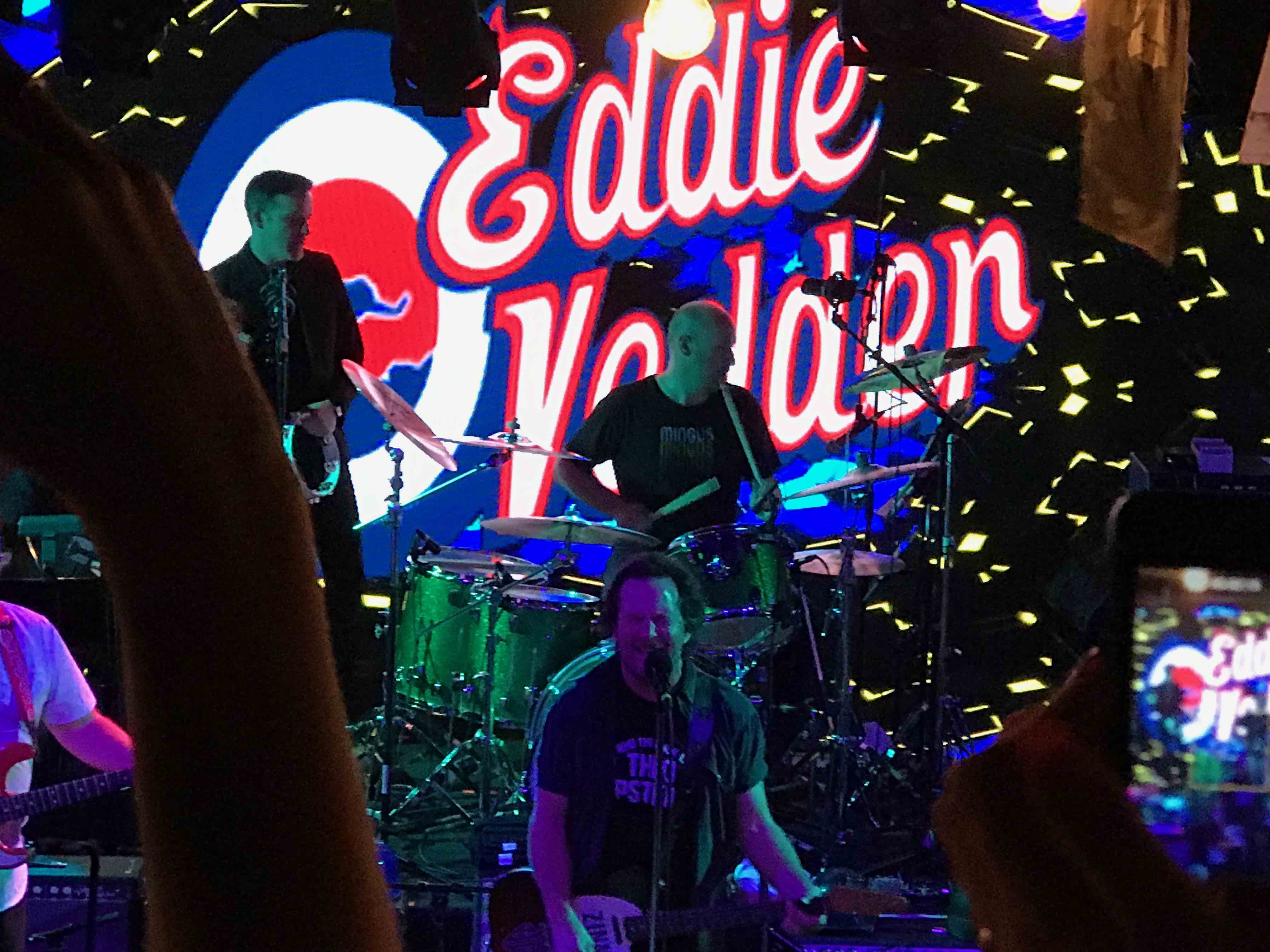 Although you know my rule when a stock like this gets crushed...
Market Timing Vs. Fundamental Analysis: What's The Diff?
Heading home with lots of new insights
Cody Kiss & Tell: $AAPL calls, $SNDK earnings, $GDX and how long for drone delivery
TITLE: Murphy's Law forces rescheduling of this week's Live Q&A Chat