Facebook earnings tonight. Saw this stat in one of the earnings preview articles I was reading this this morning:

That’s about 5.2 cents per day per user. That made me think back to an article I wrote back when Facebook was below $25 per share and I was finishing up building FB into a Top 3 Largest Position in my personal portfolio as long-time Trading With Cody subscribers will recall. Here’s what I wrote in How Facebook gets to $100 per share from July 23, 2012:

“So here’s that math that explains how Facebook FB  gets to a $200B market cap.  Their valuation right now is just under $70 billion.  Last year’s revenues were about $3 billion so that’s 22x sales, let’s say 20 for good measure.  Facebook says they have 900M monthly-active-users (MAUs), a 33% jump from the years before. So let’s say the prices/sale  multiple holds over the next 5 years, that would mean Facebook would need $10 billion in revenue to get to a $200 billion market cap. But let’s halve the multiple to 10x sales, so we’re looking for $20 billion in sales.  And let’s say that explosive MAU growth slows by a third to 11% for the next 5 years, that would give Facebook 1.5 billion engaged users. Divide that $20 B in revenue by the 1.5 and you get that at that depressed multiple of 10x sales, will anemic future user growth, if Facebook generates $13 in revenue per user per year, it’s at a $200 B market cap.

Let’s make that even simpler — that’s about four cents per day, per user.“

Facebook now has two billion(!) monthly active users. And the company’s projected to do $40 billion in sales this year, up from $3 billion in 2011.

Facebook is worth more than $500 billion today, up from less than $70 billion when I wrote that article back in July 2012. 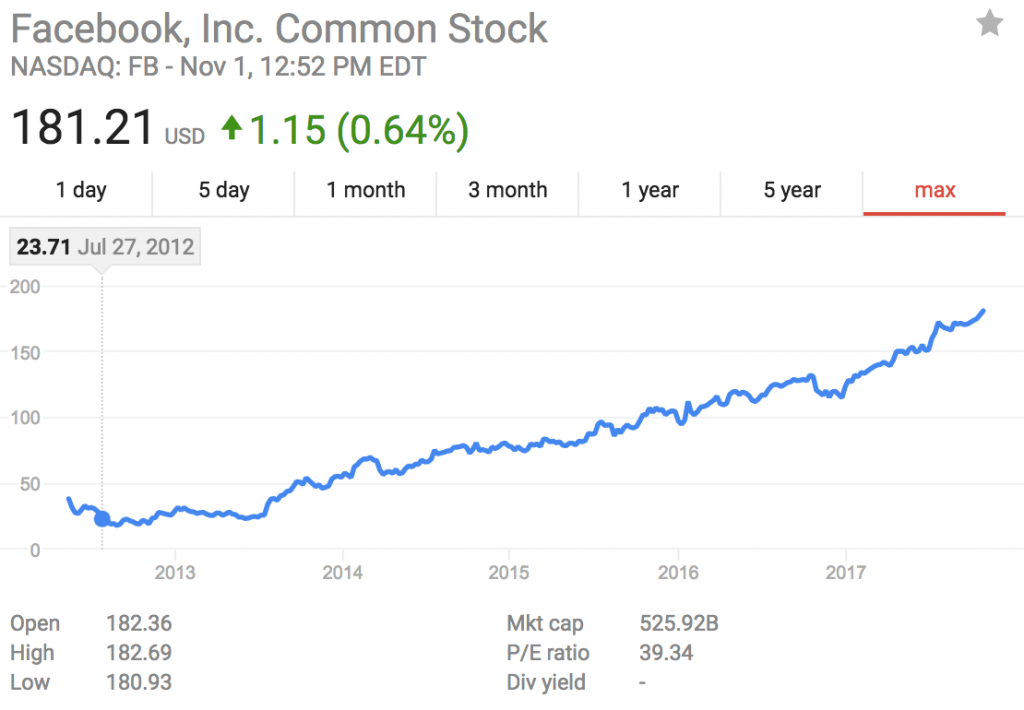 By the way, Facebook, the company, has Instagram and Whatsapp adding a hundred billion or more to their valuation and the company’s on it way to doing pennies per day in revenue on those billion-user platforms too.

So what do I expect from Facebook’s earnings tonight? Well, the whole point of what I’m saying here today is that one of the biggest reasons we’ve had so much success over the years is that we don’t get overly concerned every 90 days when the company reports how business was and analysts decide whether that last 90 days of business was “better than expected” or “worse than expected” and blah blah blah.

We outlined everything you needed to know about what Facebook’s 2017 fundamentals would look like back five years ago, in 2012, when we Revolution Invested in Facebook and I made it a Top 3 Largest Position in my personal portfolio.

Now all that said, if you’d owned Facebook for the last five years and its up 5-fold or even 10-fold from your cost basis — I’d suggest making sure you’ve done a little trimming.

Here’s the whole article, if you’d like to look back at what I predicted for the future of Facebook the company, the revenue and the stock five years ago, long before it became the F in FAANNG (popular acronym for Facebook, Apple, Amazon, Netflix, Nvidia, Google).

Much of the speculation about Facebook has been whether it can monetize the enormous traffic growths its seeing from mobile devices, whether its Apple’s iPhone or a Google  Android or a Research in Motion Blackberry (yes, those are still out there).

The idea is that desktop Web traffic is the most valuable to advertisers and ad agencies (like early Facebook investor IPG), and that kind of traffic is in perpetual decline.  Which makes some sense right? I’m with my phone basically 24 hours a day, if I’ve already checked Facebook on mobile, I don’t need to when I sit down at my trading station.  That Facebook hasn’t yet perfected the mobile advertising game is pretty well accepted on Wall Street and in the media.  Check out this Forbes article from the awesomely-named Chris Versace in an article called Facebook Needs a Mobile Business Model:

“Even Facebook CEO Mark Zuckerburg has admitted that his hardest job right now is figuring out how to adapt Facebook to mobile devices in part because the user experience is so different than on desktop computers. How can a website or an app offer advertising on a 2-inch by 4-inch screen and still offer a great smooth experience for users?

Some simple math and we realize that the vast majority of advertising revenues are generated from those non-mobile users. But the shift toward mobile devices is accelerating at a time when PC demand, particularly in the U.S. is slipping and that does not bode well for Facebook. During Q2 2012 smartphone penetration continued to grow, with 54.9% of U.S. mobile subscribers owning smartphones as of June 2012.

The risk is more people accessing Facebook on the go than at the PC, not a good thing for the company’s PC centric display advertising business model.”

We’re going to do some simple math of our own in a second, for which we need to look at that mobile argument.  What I’m saying is that you want to own Facebook because that’s the platform everyone is consuming and sharing content on, whether through desktops or mobile or hologram or augmented reality glasses.  If the entire world stops using PC’s as their primary way to access the web, wouldn’t you want to be long Facebook, a company that is growing tremendously in a tremendously growing market? And any new technology platform that emerges, you can be sure it will be used to check Facebook plenty.  It’s not on the table that mobile engagement on Facebook is going down, in fact everyone agrees it’s going up, even as it maybe decreasing the hours/month users spend on Facebook.  The issue the pundits have is that it’s a different and new kind of engagment.

And my argument is that different engagement is way, way better.  Right now Nielsen and Arbitron make money by telling content creators, advertisers and distribution platform their best guess of what users are doing based sampling .  Do you know why CBS, Disney and Newscorp  and Comcast, General Electric or whatever its called hold upfronts the third week of May? Because GM and Ford rollout new year models in the fall and they’ll need to advertise on those new fall shoes. Did you miss out on The Colbert Report while DirecTV and Viacom battled over retransmission fees? Relieved you finally have AMC’s Breaking Bad back?

In 2012 these vestigial bad habits are going to be thrown off quicker than anyone realizes and Facebook is a big part of that.  Why would NBC need to be at the whim of Nielsen’s set top boxes to call a show a hit when they can just see how many people, and exactly who, were sharing and liking talking about America’s Got Talent on Facebook? And if consumers stop watching TV in their living rooms, advertisers will have no choice but to engage them on mobile platforms, and those ad rates will spike big time.

The promise of Facebook is that you know exactly whom you’re showing an ad to, exactly how they engage with it, exactly how influential they are. Heck the very idea of an ‘ad’ is going out the window, if one of the 2.4M people who likes Papa John’s Facebook page shares a post with their 500 friends and 2% of them share it with their friends, how many ads is that? And sharing shouldn’t even fall under the old internet CTR ad model rates, it’s active engagment and many times more valuable than just clicks.

So here’s that math I talked about before and how Facebook gets to a $200B market cap.  Their valuation right now is just under $70 billion.  Last years’s revenues were about $3 billion so that’s 22x sales, let’s say 20 for good measure.  Facebook says they have 900 million monthly-active-users (MAUs), a 33% jump from the years before. So let’s say the prices/sale  multiple holds over the next 5 years, that would mean Facebook would need $10 billion in revenue to get to a $200 billion market cap. But let’s halve the multiple to 10x sales, so we’re looking for $20 billion in sales.  And let’s say that explosive MAU growth slows by a third to 11% for the next 5 years, that would give Facebook 1.5 billion engaged users. Divide that $20 B in revenue by the 1.5 and you get that at that depressed multiple of 10x sales, will anemic future user growth, if Facebook generates $13 in revenue per user per year, it’s at a $200 B market cap.

Let’s make that even simpler — that’s about four cents per day, per user.

Everything I just stated is the bear case, and about half what I expect to materialize, but generating 4 cents per user per day, by connecting engaged users with advertisers, is not that hard.  And if Facebook needs some time to evolve their strategy  or shift the thinking of advertisers and agencies to the mobile reality, good thing they have billions in the bank from the IPO.

No changes to my Facebook strategy, as I’ve already built into one of my top 3 largest positions with lots of upside leverage via a wide range of longer-dated calls.

We’re still up a couple bucks or more since I bought the stock and I’ve been trading options on Facebook and detailing it on TradingWithCody.com (not affiliated with Marketwatch) but it’s definitely been that bumpy ride that I said was all too possible.

At any rate, I wanted to be the first to point out how astonishingly little revenue per user per day this company needs to generate to get that kind of a valuation.

Get started with your own personal "Money Crash Your Portfolio With Cody Deep Dive"
Are you scared, chilled or something else entirely?
The Scutify Family of Apps and the App Revolution
Scutify App now available on Android and iPhone
Trade Alert: How I launched a hedge fund (and learned to balance my portfolio)