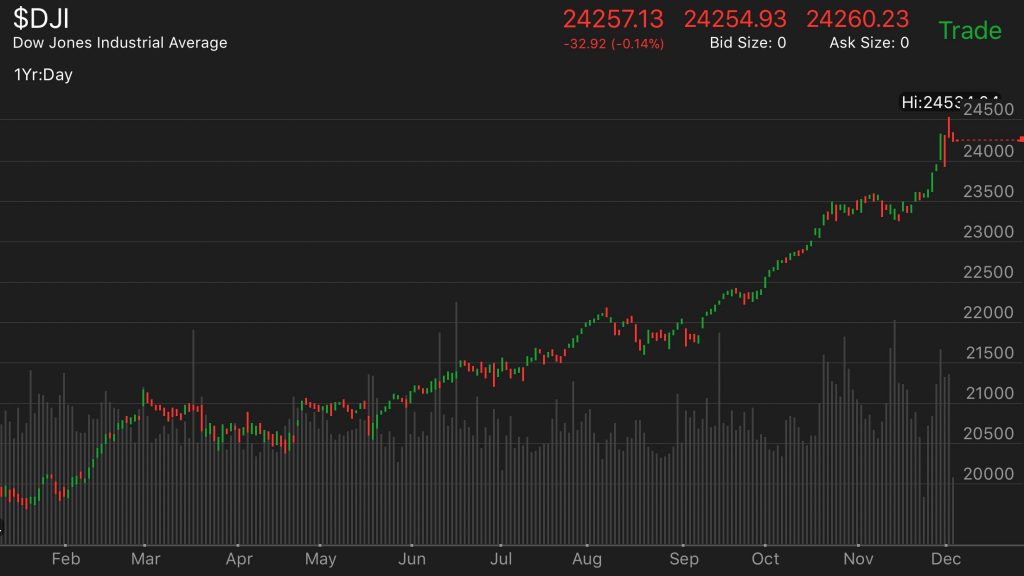 See that crazy spike up at the end there that is followed by the two other relatively large red moves? I continue to think the market is set-up for some near-term weakness, though I do not think we’re about to crash or that the the overall Bubble-Blowing Bull Market is over just yet.

I want to make a couple moves in the portfolio today, raising a little cash. First up, I’m going to sell my SNAP into today’s big pop, locking in a small gain. The company has just continued to struggle and I think we have plenty of exposure to social media with our Twitter and Facebook positions.

I’m also going to go ahead and let go of my Lion’s Gate stock for now. I want to raise a little cash, I want to reduce the number of longs in the portfolio and I worry that it has gotten to be a bit late in the bubbled demand cycle for TV/Movies by Netflix, Apple, Amazon et al.

We have several of our stocks that have rallied 300% or more in the last few years.

Meanwhile, CNBC calls hedge fund managers who eked out a 20% return this year as “hedge fund stars” because most hedge funds LOST money in 2017. The S&P 500 Index was up 15%, more than double the benchmark HFRI hedge fund index, which was up 7% percent through October, its best annual return since at least 2013.

We have a LOT to be proud of but 2018 is a new year and I won’t be resting on my laurels. Let’s aim to do it again and at the same time, keep our heads about us and stay vigilant and increasingly defensive.

Thanks for being a subscriber to Trading With Cody. I’ll keep doing everything I can to keep the outperformance going…

Trade Alert: INTC, BKS and AAPL updates
Latest Positions, including a few Trade Alert updates
Trade Alert - Like the Pink Panther, looking to sneak in (ahead of the Street) once again
Trade Alert: What I'm doing with our QCOM common and call options now
Trade Alert: Time to get a little more aggressive