After eight days in the hospital, Amaris is home, happy and sitting here watching me type this as the sun is thinking about peaking up above the mountains. Lyncoln is the world’s best big sister. And my wife is a rock of support and love.

Let’s talk markets though.  Markets look like they’re trying to make a big bounce this morning at the open, with the DJIA about to get back 400 of the 1100 points it lost in the last two trading days of last week. You do realize the DJIA is down 3000 points from its highs earlier this year.

I started buy some puts and continued paring down my longs, raising some cash and preaching defense when the DJIA was hitting those 26,000 levels earlier this year.

And later in Trade Alert: You scared, worried or relieved? Why I’m buying some put hedges:

“Most likely I expect we do get a 10% pullback in the stock markets and that some of the more volatile stocks, including some of our own will get hit for more than 10% in the next few weeks. That said, once again, as I’ve been saying consistently for nearly a decade during this economic expansion and Bubble-Blowing Bull Market, I still think the longer-term forces are likely to continue to drive stocks higher after what might be a more serious pullback in stocks than we’ve seen in a while. I’m going to nibble a few puts on the IWM (which represents the Russell 2000 smaller cap stock index) and the SPY (which represents the S&P 500), but I’m not turning terribly bearish or calling a top in the stock market. I’m just doing a little more hedging here to my portfolio is which is still quite net long and bullishly positioned. I’m going to buy IWM puts with strike prices around $155 or so and that expire out in March and April. I’m also going to buy a few SPY puts with strike prices around $280 or so that expire in March and April.”

So obviously, with the stock market down 10% just like I’d expected when I’d bought those puts, we’ve got some nice gains in them. When the markets open this morning and they open higher, those puts will get hit a little bit. If you haven’t trimmed any of those puts yet, you probably should today, even if you’re going to get a little bit less for them today then if we’d trimmed at the close on Friday.

When I’d bought those puts, I’d mentioned “Don’t stress. Don’t try to catch the top and don’t conclude that this is THE top either. Don’t sell everything. Don’t worry if you don’t understand what blockchain or cryptocurrencies are. Don’t be greedy. Don’t be shortsighted. Don’t follow the crowd.”

Don’t try to catch THE bottom with your puts. Think of it this way — let’s be realistic. How many analysts and newsletter writers and pundits and money managers out there who rode this bull market for the last ten years actually turned a bit bearish and told their followers to buy puts right before the market tanked 10%? Pretty much NOBODY but us. 🙂

The bulls missed their chance to get defensive while others were being greedy. The bears have been repeating their same warnings for the last ten years and now are trying to pretend they’ve been right all along.

Let’s not play the bulls and bears game like everyone else.

I’m going to see 5-10% of my puts today — I’ll still have about 75% or so of the puts left that I’d bought when the markets were at their highs. 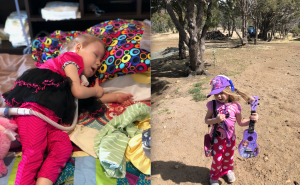