It’s still far from safe to invest in just about any publicly-tradable cryptocurrency. I still expect that more than 95% of the current batch of publicly-tradable cryptocurrencies are going to zero. I still expect that bitcoin is headed to $1000 or lower. Much of what I outlined in the book I published in December about why, after five years of having owned bitcoin and being a bitcoin bull since it was at $100, I’d sold most of my bitcoins and turned outright bearish predicting that a Great Cryptocurrency Crash, has played out to a T.

So why, even after bitcoin and all the major cryptocurrencies have now crashed 70% or more since the day that book was published, am I still so bearish?

Let’s run through four reasons why The Great Cryptocurrency Crash most likely is far from over.

1. Little to no fundamental support for crytpocurrencies. Unlike with stocks, there are no “fundamentals” or earnings to support any specific level in bitcoin and most of the current batch of cryptocurrencies, few of which are backed by any assets at all. If Apple’s earnings $12 per share and has hundreds of billions of dollars of cash and other assets on their balance sheet, those earnings and assets provide a baseline support for the stock. Whether that support got wildly depressed at below book value and/or at 3x earnings per share, there are fundamental factors involved. Not so with bitcoin or most cryptocurrencies. Their value is derived based, right now at least, upon what the people who trade and own the cryptocurrency are will to trade it at. In bitcoin’s case, because so many billions of dollars have already been invested in its ecosystem, there is potential that bitcoin continues to get wider acceptance and has some aspects of fundamental demand as a currency. But bitcoin could still continue to gain wider acceptance while trading at $500 or $1000 or whatever level it hits before The Great Cryptocurrency Crash is over.

2. More than 90% of the cryptocurrencies that are publicly-tradable are scams, frauds and/or silly. These will go to $0 in the next few months and will drag even the good cryptocurrencies lower as money leaves the industry.

4. Trapped bitcoin/cryptocurrency owners. Look at this chart. Bitcoin can’t get above $7000 for the last few weeks, so I went back and looked at when did it first hit $7000. And it’s amazing that on November 2, the first time bitcoin hit $7000 is exactly the level at which the volume went nuts. It’s when the masses started buying bitcoin. And now, every single person and company who bought bitcoin in the last five months is down and down big. And look at the volume of bitcoin that traded above $7000. All those people, all those traders, all those investors, all those companies who bought millions of bitcoins are down and most are down big time with losses out the wazoo. Every one of those bitcoin holders who bought above $7000 are hoping and praying that millions of new investors and traders and companies will now come in and take bitcoin back to $20,000. But all those weak-handed holders are scared after seeing this 70% drop. And they’ll most likely be selling on rallies, muting the upside near-term. Most will probably be looking to get back what money they can whenever bitcoin gets closer to where they bought it at. 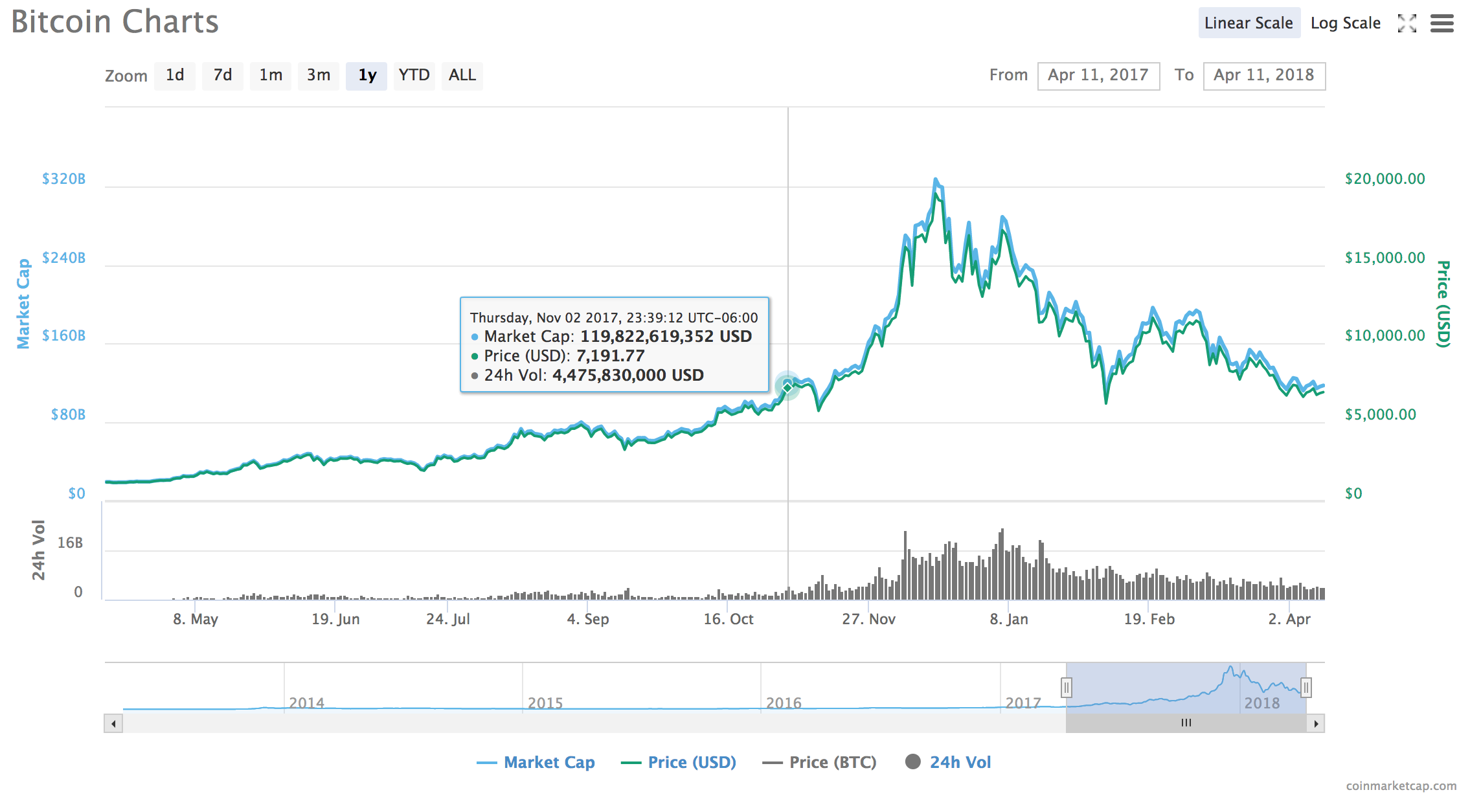 I’m still hard at work on finding the next generation of cryptocurrencies for us to put a little bit of capital into. I’ve got a call with the people behind the Stellar cryptocurrency Thursday and several other calls with brand new, yet to go publicly-tradable, cryptocurrency creators and facilitators in coming days and weeks.

But I’m clearly in no rush to plow a bunch of money into cryptos anytime soon. I plan to let The Great Cryptocurrency Crash play out as it will first.