I’m back from a great trip with the family. It’s hard to take Amaris to a hotel, as we have an oxygen concentrator and other equipment that we’d have to haul in and out of the room. And with all the time my wife (she misses more work than me) and I miss with Amaris having been in and out of the hospital a bit more than we’d like the last three years, it’s hard to find the time for a full vacation. So we took our medically-equipped RV to Red River NM for four days and had a blast. See more pics here. 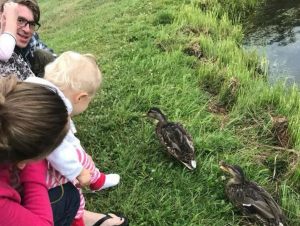 On the first night there, my daughter Lyncoln and I got to chat up Michael Martin Murphy before his show (even Amaris was there!) and I told him about how some of my Mescalero Apache friends (and I) love his 46 year-old song, “Geronimo’s Cadillac.” His band played the song and Michael talked about how it’s a protest song and how he “used to be a civil rights activist.” Throughout the rest of the concert, Michael gave his his take on global warming in terms that you’ve probably heard most Republicans talk about, how we need more cows grazing the land (I found that “flip it” take interesting and will have to do more research on bovine impact) and other political topics in terms that his sons might have been referencing when they mentioned their dad is a “cranky conservative cowboy” these days. Interesting political times we live in, and I’m having a doozy of a time thinking about how all of that underscores how very differently people frame political issues today vs in 1972 (which also happens to be the year I was born, by the way).

Now onto today’s post, which is indeed, a “nibble” Trade Alert.

That is, I’m adding a second tranche of WDC today, buying about 1/3rd of a full-sized position. I’ve pasted the original Trade Alert from six months ago when I bought the first tranche. Here are the key points:

“Western Digital, much like Micron, stands to benefit from the surge in the use of smart devices. As the need for data to move from one device to another will grow, so will the need for a smart storage. As companies wish to analyze and predict consumer tastes and anticipate decision making, the storage of the data will be right up WDC alley. Storage is an integral part of all mobile, IoT, voice-first and autonomous devices. WDC made a great purchase of Sandisk and the potential to own Toshiba’s memory unit makes it interesting to see what is in a storage for the future.

The industry has never had so few competitors, having reduced itself down to three major players. The cost of building new fabs runs six or seven or more billions of dollars, when it used to cost “just” a billion or so a decade ago. The aforementioned secular growth of demand for flash storage from the aforementioned Revolutionary sectors.”

Cody back in real-time July 23, 2018. In the last six months, all of the aforementioned Revolutionary trends have accelerated: mobile, IoT, voice-first and driverless. Driverless, especially is something I’m increasingly excited about the acceleration of growth over the next three years, and it’s need for chips and flash is exponential.

I’m less confident about the the fundamentals in the flash/storage industry over the last 90 days as pricing might have been soft and we’ll find out what the results for the most recent 75 days of business (90 days minus weekends) were when the company reports this Thursday, July 26, but I think those concerns are largely baked into the stock price here at $75 or so already.

The stock’s been on a steady pullback for the last couple months as rumors of soft pricing in flash and storage have been circulating. Those rumors are probably true as I just noted. And the chartists and technical analysts are shorting this stock now as they are convinced that since the stock has “broken support” on the one-year chart that it’s headed lower still. 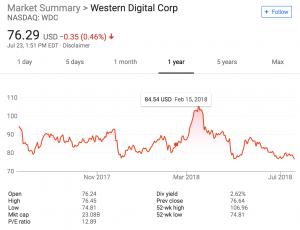 The stock might get hit after its upcoming earnings report, but it also wouldn’t shock me if the stock pops after it reports, even if the report and guidance are “lower than expected.” But as we’re investing in this stock as a longer-term Revolution Investment, I’m obviously leaving myself room for another tranche or two should the stock get hit harder in the near-term.

Well, I plan on dipping my toe into the water with two new names this week. I’ve been working on both of these names for several weeks and worked with the best value investor I know, Robert Marcin, on them.

Robert and I sometimes collaborate on finding new ideas and checking each other’s analysis on tech names in particular. Marcin and I have been bouncing ideas off each other for nearly 2 decades now and when our analysis from my Revolution Investing perspective lines up with his value-based perspective, we’ve had some big wins at times. Right now, I’m particularly interested in finding stocks that have some value-basis since, as long-time followers know, we’ve got a bunch of growth-oriented positions that are up 300% or 500% or even 10,000% (not a typo, see below) or more. Before we jump into the analysis for each of the two new names I’m adding to my portfolio this week, let’s step back and put some perspective on my Revolution Investing approach.

Remember my mission is to, as I wrote back in 2011 when we launched Trading With Cody:

In a general sense, my mission is always…

And a little more background on what we’re trying to do. Here’s what I wrote in my #1 Amazon best-seller, Everything You Need to Know About Investing, also published in 2011:

Revolution Investing means being aware of both the broader economic cycles as well as finding secular stories, such as the burgeoning exploding demand for all things cloud-related and app-related names in here in the early 21st century, for example. Demand for application software, or apps, usage of apps, reading about apps, building of apps, and everything else app-related is going to rise this year over last year and next year over this year and so on and so forth for the next decade or so … no matter what happens with the broader economic cycle, see?

On the other hand, I’ll also try to find shorts in the companies who are losing out because they are on the wrong side of the secular growth phase of such secular changes. Such stocks typically pay off even bigger if the economy were to tank because the business is going to deteriorate regardless of what happens in the broader economy.

We’ve owned some incredible winners over the last year and the last seven years and over the last 17 years that I’ve been investing/trading in the public eye. We recently wrote this marketing item up for our promotional materials:

The truth is that sometimes I can’t believe we’ve had that many hits over the years. Here’s hoping these are two more we can add to our marketing materials in a year or two. Remember, there’s always risk and I’ve made mistakes before of course!

So without any further ado, let’s jump in to the new names.

Recall that WDC bought long-time Trading With Cody holding that we also made a bunch of money on, Sandisk, a few years back. Well, it’s the Sandisk flash division that is the primary reason we’re buying WDC now. The stock is trading at just 6.5x this year’s earnings. That’s because most analysts believe that WDC’s earnings power has peaked at $13 or so per share. Meanwhile, the demand for flash storage has never been in a more secular growth phase, as every IoT device, every driverless car, every smart TV, every computer, every server needs ever more storage. The bears and analysts are probably too focused on the very cyclical past of the storage industry. But there are two main reasons why it might be “different this time,” both of which I believe to be true:

The industry has never had so few competitors, having reduced itself down to three major players. The cost of building new fabs runs six or seven or more billions of dollars, when it used to cost “just” a billion or so a decade ago. The aforementioned secular growth of demand for flash storage from the aforementioned Revolutionary sectors.

See below what we mentioned in the Voice revolution book:

“Western Digital, much like Micron, stands to benefit from the surge in the use of smart devices. As the need for data to move from one device to another will grow, so will the need for a smart storage. As companies wish to analyze and predict consumer tastes and anticipate decision making, the storage of the data will be right up WDC alley. Storage is an integral part of all mobile, IoT, voice-first and autonomous devices. WDC made a great purchase of Sandisk and the potential to own Toshiba’s memory unit makes it interesting to see what is in a storage for the future.”

I like the risk/reward on this name here and I’m going to make it a mid-sized position in my portfolio. I plan on buying three tranches of it over the next few weeks, with the first tranche coming today. WDC reports earnings tomorrow, and I’ll probably buy some more next week regardless of how the stock trades after the report.

I’ll start by quoting an email that value investor extraordinaire, Robert Marcin, sent me about Calix a few weeks ago:

“I am jazzed at the opportunity here. The company has the biggest and best new product cycle in history. If it works, company will make $1.25 in 2019 on double digit revenue growth. That warrants a market p/e of 18x’s and a $20 stock. This is not riskless however. The company has long history of poor execution and over-promising/under-delivering. And they would require meaningful adoption by Verizon, their first tier 1 customer. But if this does work, there’s significant upside. If co doesn’t deliver I would hope to sell around these prices. What can you buy at 40% of sales in a market full of 200%+ company valuations??”

Calix, stock symbol CALX, is a risky small cap fiber optic switch platform play. That is, the company sells a “passive optical network” (PON) switch/platform that enables internet/wireless providers an energy efficient (passive means there’s little or no electronics inside the switch) connection between the cloud and networks that connect directly to the end users.

Calix management has targeted earnings of more than $1 on more than $600 million topline in the next couple years. If the company hits those kinds of targets, that likely means that their platform has been adopted into some major customers (specifically at Verizon as Robert notes above, but if the company wins at Verizon that could mean other tier 1 carriers start deploying Calix PON too) that could drive earnings and revenue much higher than that.

Management has invested a bunch of money and basically bet the company on this PON network platform so that sets us up for a binary outcome for investing in this stock too.

Perhaps the worst case scenario for this stock would be if the company’s customers build their own platforms upon a competitor’s product line and Calix misses forward estimates and breaks even or loses money in future years. The stock could be at $3 or less in that worst case scenario.

With the binary outcome potential for this stock, I’m not going to make it a huge position, but plan on buying three small tranches of it over the next few weeks, with the first tranche coming today.