Wow, that’s quite a reaction to FB’s earnings. At least after hours. Not sure the stock won’t keep heading lower for awhile, but that’s why we trim (we’ve trimmed Facebook several times in the last few months, see, for example: Trade Alert: Nibbling some IWM puts and trimming some 3-8 baggers and Trade Alert: Locking in some 700% gains in my largest position) and why I keep telling everyone to stay cautious right now!

To put some perspective on FB’s move, down 21% to $175 or so here after hours right now, recall that the stock was trading at exactly this level less than 90 days ago. It’s also just about $5 above where I trimmed 5% of my FB position last July — a year ago. 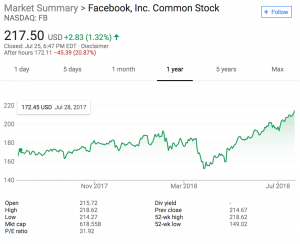 I wouldn’t rush in and buy a bunch of FB right now though. Patience, patience. Let the dust settle. Let’s digest the call and new fundamental outlook.

As you’ll read in endless headlines for the rest of this week, on Wednesday afternoon’s earnings call with analysts, Facebook CEO Mark Zuckerberg announced another way the social network measures and breaks out users: about 2.5 billion people use at least one Facebook-owned app — Facebook, WhatsApp, Instagram, and Messenger — each day.

And for once, the mainstream media will have it right — that actually is the most important thing about Facebook. That, and the fact that, as I keep saying, “In regards to the the EU and the US governments and other governments around the world that have created new regulations for social media companies : All that means is there will be few if any new social media type networks and apps that can afford to comply with those new regulations. Facebook (and Twitter) is now free to roll up or kill any and all remaining competitors.”

All that said, I’m trying to be clear here that I’m not sure FB’s going to rebound back to $200 anytime soon, maybe for a few quarters or a year. The valuation BEFORE today’s warnings from the company about needing to lower forward growth and earnings estimates was about 20x next year’s earnings estimates of almost $10 per share. Those estimates are going to be taken lower in the morning and for the next 90 days, until the company reports again next quarter and we find out more about the future.

For more perspective, see also: From 2012, Cody Willard: Why I’m the Idiot Buying Facebook or Bring on the Facebook hate.

One new name for an earnings trade and a markets update
Spy vs Spy: The put trade explained
This won't be the last 50% pop in this sector...
Cody Kiss & Tell: Phantom-permabear-not-actually-meaningful catalysts and much more
With LinkedIn.com now over $120 a share ...