Last Tuesday, I wrote: “Feet-to-fire (F2F) guess for the markets for the next 1-2 months: Markets go up another 3% from here, fall 5-7% in a mini-crash, then trade sideways into year-end. I wouldn’t try to profit with that feet-to-fire market guess I just laid out though!”

On Friday, I updated that by writing: “Sentiment and momentum can swing in a heartbeat and all those people highfiving because they made big gains this week are likely going to be in pain when the turn, even a temporary downturn hits. And I tend to think we’re about to get that 5-7% downturn I’ve been expecting, starting likely next week as hubris and highfiving go hand and hand. And the markets hate hubris…I’ll likely nibble yet more puts and do some more small trims of our own many highflyers early next week if the markets are up again, as I think there’s nemesis for the hubristic coming sooner rather than later.”

Well, with the rally popping the Nasdaq to new highs this morning, it’s up more than 2% since gave my F2F guess that the market would pop 3%. More to the point though, AMD and NVDA and other momentum stocks are on fire yet again today, with AMD up another 6% here. That stock is up more than 150% in the last 90 days.

I’ve followed, analyzed and/or traded AMD for more than 20 years now and I can tell you that this stock brings out the emotions from bulls and bears much stronger than in most other stocks. It’s a bit like TSLA in that regard, though AMD has been public for much much longer, having come public just 28 days after I was born in 1972:

Within twelve years, AMD’s stock went from a split-adjusted 57 cents per share to $19 per share. Yes, it’s true. If you bought AMD shares in 1984 and held it til last week, you were still down on your investment. As of this week, with AMD’s 30% pop in the last five days, you’re finally up 20% on your cost basis from 34 years ago. 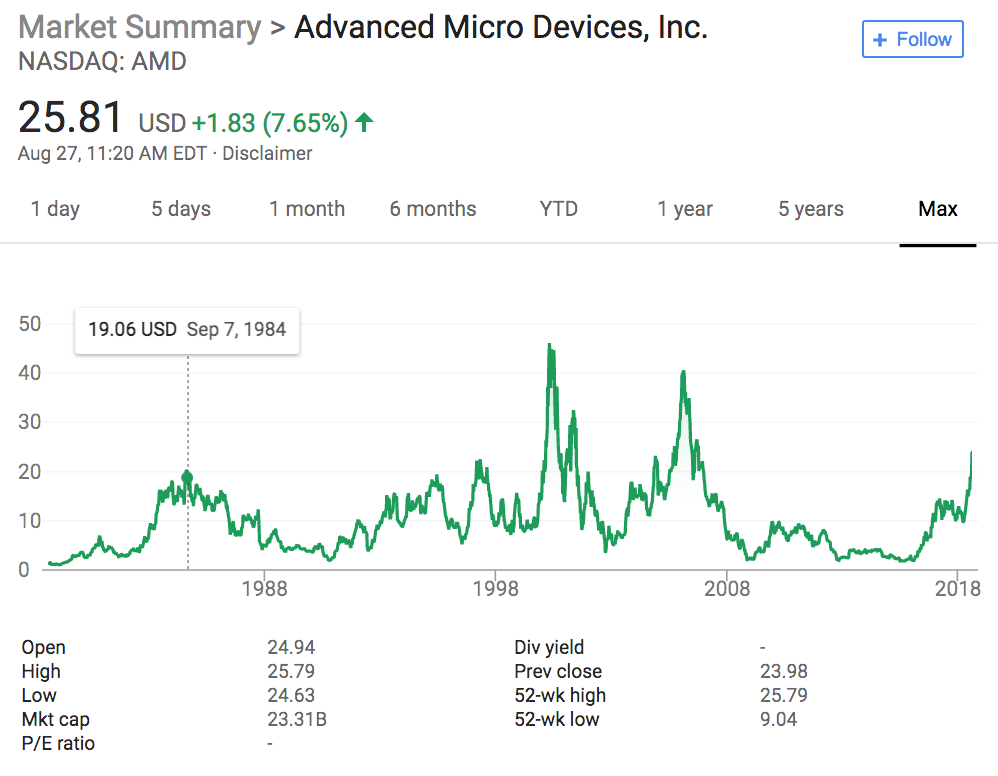 To put some more perspective on it, AMD shareholders who bought the stock the day it came public were up just only 200% on the IPO price as of two years ago. Holding the stock since it’s IPO low through August 2016 had a less than 1% annualized return (as I noted recently, Apple is up Amazon). 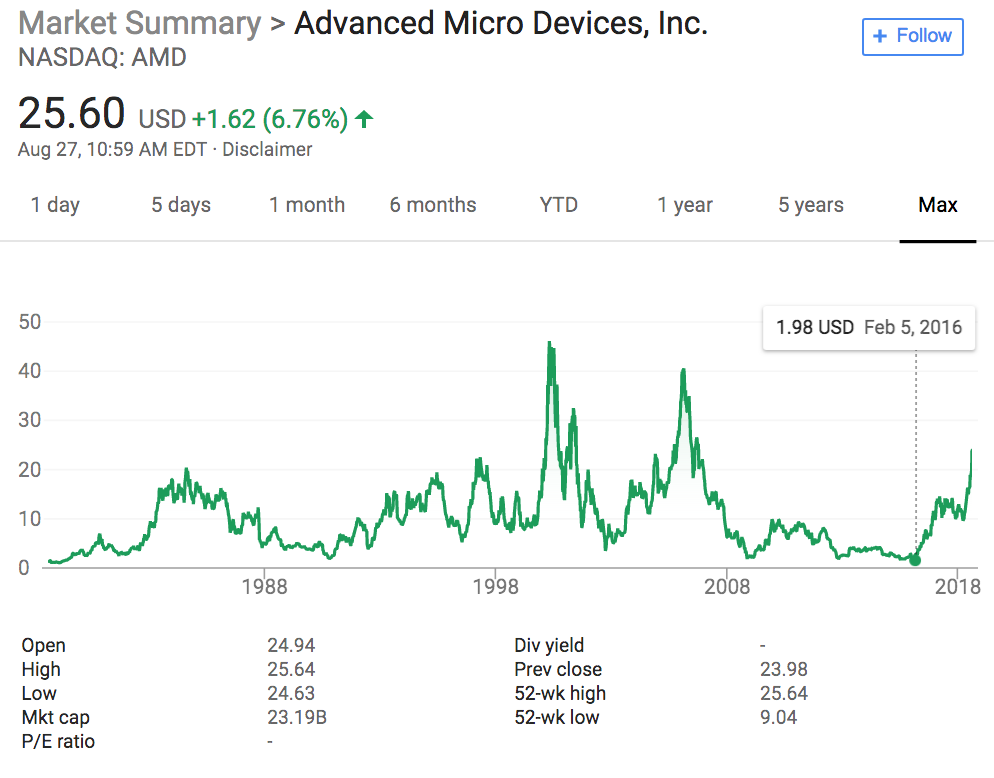 Along the way, over the last four and a half decades, AMD’s stock has gone up 500-1000% several times and has subsequently dropped 80-90% several times.

So maybe AMD has finally turned the corner will never drop back to the single digits again. Maybe it will keep growing 25% per year for the next few years and the stock will actually double or triple from the current $26 quote.

Then again, perhaps it’s more likely from history’s lessons to expect that Intel, Nvidia and AMD’s other major competitors are going to leap frog past the company’s latest portfolio of chips and chipsets and platforms once again. And that would mean AMD will have a hard time living up to the current stock price that’s been reached in a parabolic fashion and has gone perhaps in a blowoff-top-like manner here the last few weeks and days.

Is AMD terribly important to the broader stock markets? No, but a loss of momentum in this name which would join TSLA as a downside momentum stock would certainly contribute to a near-term sell-off in the tech sector.

I’m not calling a near-term top today, nor am I calling for this to be the long-term top in either AMD or the Nasdaq / S&P 500. But I do think the risk/reward is quite favorable on these hedges and that we might even catch a little extra alpha if the trades were to work out in the next few months.