For the last few months, I’ve been actively raising more cash and even nibbling some puts dated out into November and December in anticipation of a pullback that’s certainly now here with the markets down 3-4% in the last few days.

Yes, the pullback is here.

The question now is whether:

I don’t have the answer, obviously, but I do have analysis to help us figure out what the most likely outcome is and how we should be prepared for it already and what we can do to prepare further.

I noted last week that I think inflation is about to rear its ugly head in coming months and weeks. Tariffs, wages, huge labor demand with little new labor supply in this country, interest rates going higher (see more analysis on interest rates below), currency swings…these are all causation and/or correlation with spiking inflation.

I’ve also noted that its not simply higher rates that would make me concerned about a major pullback in the stock markets, but that it’s when the rates spike higher quickly with velocity. Here’s a chart of the ten-year Treasury: 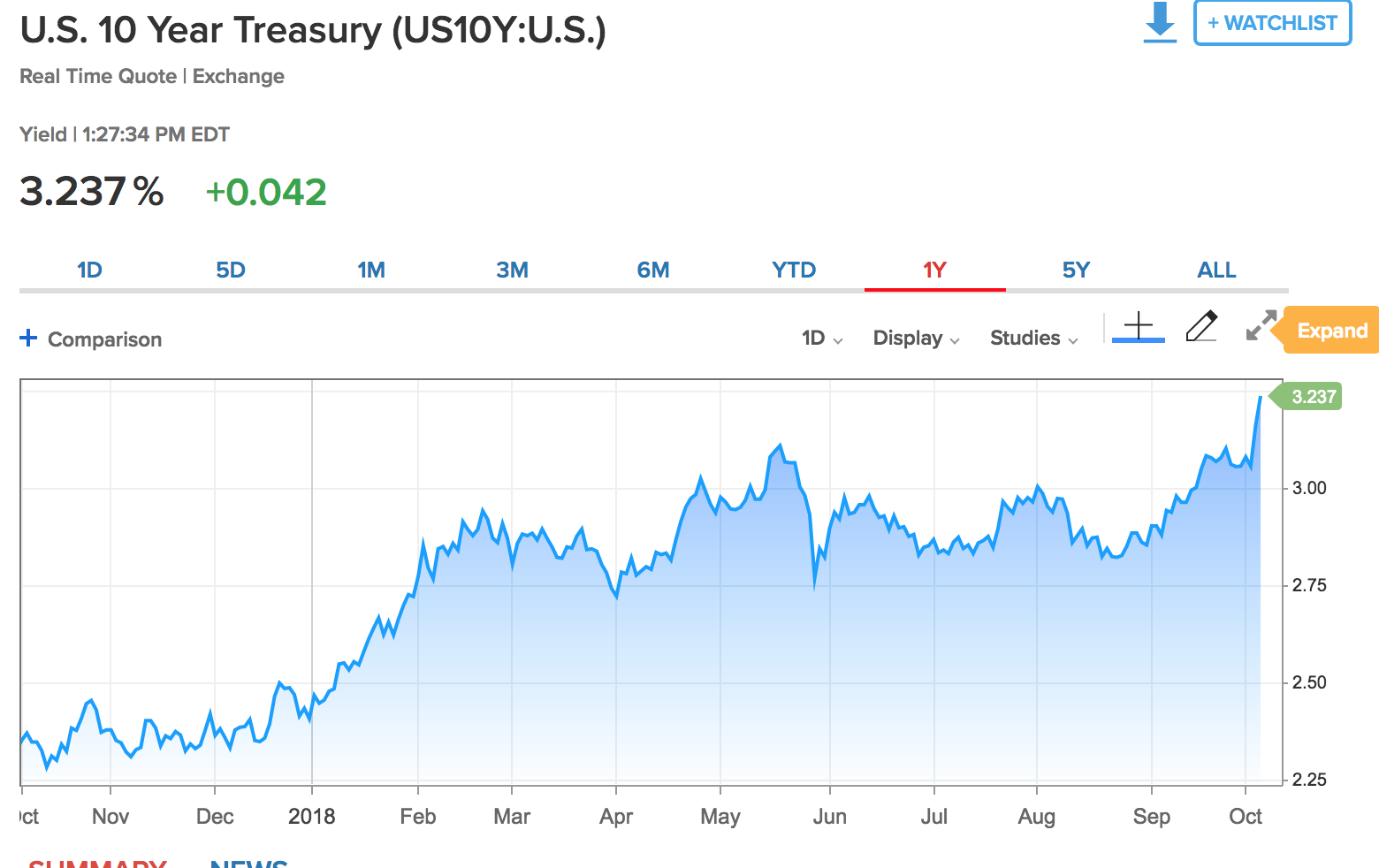 That’s a pretty steady trend higher that’s got a big spike there at the end, as rates have gone from slightly over 3% to 3.23% just this week. It’s not quite what I’d call “shocking” velocity on the move higher there, but it’s got the potential to be so. If rates go to 3.5% in the next month, that would probably be rather alarming as a potential Black Swan financial markets banger.

And more to the point, The Great Trade Wars of the 21st Century that I pointed out got started months ago, is now having some unintended consequences and there’s a lot of Fog of War mistakes being made in China, the US, the EU and everywhere else.

Remember that I’ve always expected that the market would eventually take rates back up and once it does, that the Fed would not be able to contain higher interest rates in the broader markets by lowering their own central bank rates or playing QE and other monetary games again. And right now, there are algorithms playing games with Treasury Rate ETFs like the TLT. And that’s another potential catalyst for these rates to spike (or maybe crash suddenly) in the next few days and weeks.

Meanwhile, the stock market hit new all-time highs this week and our president was touting that just about at the moment the stock markets decided to start this pullback, which underscores the complacency amongst most investors that I’ve been highlighting lately too.

Not to mention all those hundreds of middling tech stocks that are trading at 10-15x next year’s sales estimates. Valuations are extended in many sectors, fear has been absent and in that context a sell-off like can in turn actually start building some fear into the markets.

And a bit of fear in the markets, can obviously be more bullish than the widespread complacency we’ve seen of late.

So what’s the upshot and what are the moves we might make here?

The upshot of this analysis is first of all, that we shouldn’t be panicking about any of this. We’ve been preparing for it and we’ve got playbook here to navigate these swings. Secondly, the inflation and interest rates and Trade War issues that I’ve been warning about for the last few months as potential Bubble-Blowing Bull Market killers are indeed more visible today than they were six months ago.

The flip side of that scenario is the one that we’ve been investing in and profiting from for the last eight years — markets are still quite high, earnings are strong, cash is everywhere and growth is looking strong for this year and next, and that can make markets go higher and higher markets will feed confidence and access to capital and so on. And every time, for the last eight(!) years that anybody has cautioned that this Bubble-Blowing Bull Market is over and that it’s all about to crash, they’ve been dead wrong.

I started this post off talking about how I’ve been more actively raising cash and even nibbling some puts dated out into November and December in anticipation of this pullback that’s certainly now here with the markets down 3-4% in the last few days. And yesterday I mentioned that I’m starting a new hedge fund in three months.

Most times, and certainly at this particular market set-up and whether I’m running my money or a hedge fund, I’ll tell you this — the best defense is simply cash. Those put hedges I’d been scaling into a few weeks ago are finally starting to do their job of hedging the portfolio.

And then there’s gold and GLD. I think higher rates and inflation trends are bullish for gold. I think there’s about to be a serious rotation out of Bitcoin and other cryptocurrencies that still collectively have hundreds of billions of dollars of value from people India and other developing economies who’ve been burned as The Great Cryptocurrency Crash has crushed them this year. And unlike stocks, gold’s chart isn’t straight up. In fact, it’s hated right now and the chart is ugly.

For today, I’m not making any new moves. If you don’t own any of Revolution Investing Trading With Cody stocks or you’ve been waiting for a chance to nibble at some, you might look at doing so today.

Remember that we don’t have to be all in or all out. You can nibble some opportunistically. You can sit right on your stocks and (hopefully) higher cash levels and put hedges that you’ve built up in the last few months and or the last couple years. You can trim a little bit if you’re stressed out and don’t think you have enough cash and hedges.

I’ve been trying to find smart ways to get in front of higher inflation, higher rates and other economic trends that are developing and gaining momentum here. But you can try too hard, you can end up getting too cute. There are no easy answers at this set up.

Be cool. Be calm. But stay cautious.

98 years of inspiration and other notes
I Was Scared On The Drive Home And It Reminded Me Of The Stock Market
I do think Apple's setting itself up to ...
Cody's Trades of the Week for October 31-November 11, 2016
Cody Kiss & Tell: I'm running for President, Tech M&A, IBM, and more