Here’s the transcript from this week’s Live Q&A Chat where we hit on what’s next for the stock markets; gold vs silver vs bitcoin; where we are in The Cannabis Bubble of 2018; Disney vs Neflix; Def Leppard vs LL Cool J; and much more.

Q. Cody. Fire to the feet, how far would the market fall from here. Is it too late to buy some QQQ puts?

A. My most recent feet-to-fire market prediction was in late August, just a few days before I was about to scale into some some QQQ and SPY puts and writing, “Sentiment and momentum can swing in a heartbeat and all those people highfiving because they made big gains this week are likely going to be in pain when the turn, even a temporary downturn hits. And I tend to think we’re about to get that 5-7% downturn I’ve been expecting, starting likely next week as hubris and highfiving go hand and hand. And the markets hate hubris…I’ll likely nibble yet more puts and do some more small trims of our own many highflyers early next week if the markets are up again, as I think there’s nemesis for the hubristic coming sooner rather than later.”

Well, the Nasdaq did indeed put in a top that next week and is now down 6%. I have to say I don’t feel nearly as confident about making a market prediction here, but I’ll try. Broader market moves, as I often explain, are often largely driven by sentiment more than anything else. And sentiment was outright greedy and cocky back six weeks ago, which is what had my spider-senses tingling and had me predicting this current pullback with some confidence.

Right now, it’s a bit more muddled. The longs are wondering if they really should be scared right now, the shorts have been killed over and over for the last eight years and every time the markets pullback 5-7% they pile back into their shorts and then get killed again. Not sure the shorts are doing that right now though. Meanwhile, inflation, interest rates, The Great Trade War of the 21st Century and other potential concerns are hardly being taken seriously by most analysts, pundits and investors right now and those could impact the markets.

F2F guess then — the QQQ stabilizes here for the week or two, churning up 1% one day, down 1/2% the next two days, up 1/2% the next day, etc. The SPY and DJIA, which have not really pulled back much yet, fall another 3-5% in the next 2-3 weeks. And then the whole market churns around those levels into year-end.

Q. Cody what is your plan for AMD puts? QQQ puts?

A. Well, I was a bit early on the AMD puts, though the stock has come right back down to where it was when I bought the puts with such velocity that they’ve kicked back in lately. I’m holding them tight for now, but if the stock drops below $25 or so I might trim a few of them. They serve partly as a hedge to our overall long tech portfolio and partly as a hedge to our long-held NVDA position more specifically. The QQQ puts are looking pretty good here, especially that last tranche I bought back six weeks ago when the QQQ was hitting what turned out to be its high point before topping out and now pulling back a full 6% from that level as of this morning. I might trim some of my QQQ puts position and/or SPY puts that I bought six weeks ago too. These are hedges though and I don’t want to rush out of the protection they’ll provide in case this current pullback gets harsher.

Q. Cody — I’m not sure you’ve addressed this anywhere recently; if you have, I apologize. The subject is the recent velocity of growth of gold vs. silver — specifically, in the ETF forms of GLD vs. SLV. When you first started feeling good about getting back (modestly) into gold, I did so in the form of GLD, and you indicated that SLV was the equivalent if one didn’t want to buy the actual metals. Since then, SLV has had a much larger upside trajectory (to say the least) than GLD. Any opinion?

A. Hmm, I don’t see that SLV or GLD has had much upside trajectory in the last couple months since I sent out that Trade Alert that I was nibbling some GLD. Regardless, I like gold and GLD better than silver and SLV here, though I do think both are relatively attractive here compared to say, mid-cap tech stocks trading at 12x sales. As the people in developing nations and gold bugs around the world who swapped out of gold and into cryptos/bitcoin last year rotate back into gold, I think gold will outperform silver over the next year or two. Inflation creeping higher, rates running higher, stocks taking a hit…these are all factors that could drive gold/GLD and silver/SLV higher.

Q. Cody….gold looks awful….seemed like it made a bottom and tanked again yesterday…..is it making a bottom here?

A. See what I wrote about gold above. Put simply, I think it’s putting in a bottom here, but more importantly, I think it’s headed 20% or more higher over the next year or two.

Q. Thoughts on upcoming SEC decisions regarding BTC ETF applications? The hodl’s really keeping the ~6k floor for quite some time.

A. Hodl (/ˈhɒdəl/ HOD-əl; often written HODL) is a slang term and Internet meme that is used in the cryptocurrency community when referring to holding the cryptocurrency rather than selling it. In this case, “quite some time” is certainly a relative term. I’m still holding a small amount of bitcoin but I still expect to see it closer to $1000 at some point before the crash is over. Could be wrong tho, as I do believe in bitcoin for the long-term (or I’d have sold all of it of course).

Q. I bought some in the 6500 range and picked up more Stellar & Ethereum as well, but not “all-in” by any means as I’d love to buy lower. Everyone is looking at the ETF as a moon signal… doubt if that’s the case. I prefer to look at bigger players slowly getting involved (Ameritrade, Citi, endowments etc) which tells me some crypto will definitely survive and eventually thrive.

A. Good stuff, I agree, thanks.

Q. Cody – do you expect cannabis stocks to crash and bottom next year? It looks like they want to squeeze and close the current year strong.

A. I don’t agree with you that they look like they want to squeeze and close the current year strong — I think the shorts in the cannabis stocks have been squeezed to death already in the current spike/bubble in these stocks that we’ve seen in the last month or two. I expect that we’re already near or just past the top in The Cannabis Bubble of 2018 and that there’s big pain for cannabis stock traders/bettors into the year end and early next year.

Q. Cody – whats your take on DIS going forward. They’re planning on a NFLX like service sometime next year?

A. Disney spent fifteen years not bothering to understand streaming! Talk about being asleep at the wheel. And now, fifteen years since The Internet Video Revolution that I used to write about so much back then has indeed already fully blossomed, and NFLX is up 31,000% while Disney has gone up 300% over that time frame — now Disney’s going to get serious about trying to take on Netflix? How is Disney going to get their app into every smart TV, smart device, get a dedicated button on TV remote controls, etc etc? They’re late. I don’t hate DIS and wouldn’t short it. But I can’t believe how badly they’ve messed up The Internet Video Revolution. Everything they’re saying they’re about to do in the next five years with streaming is what they should have been doing ten years ago! 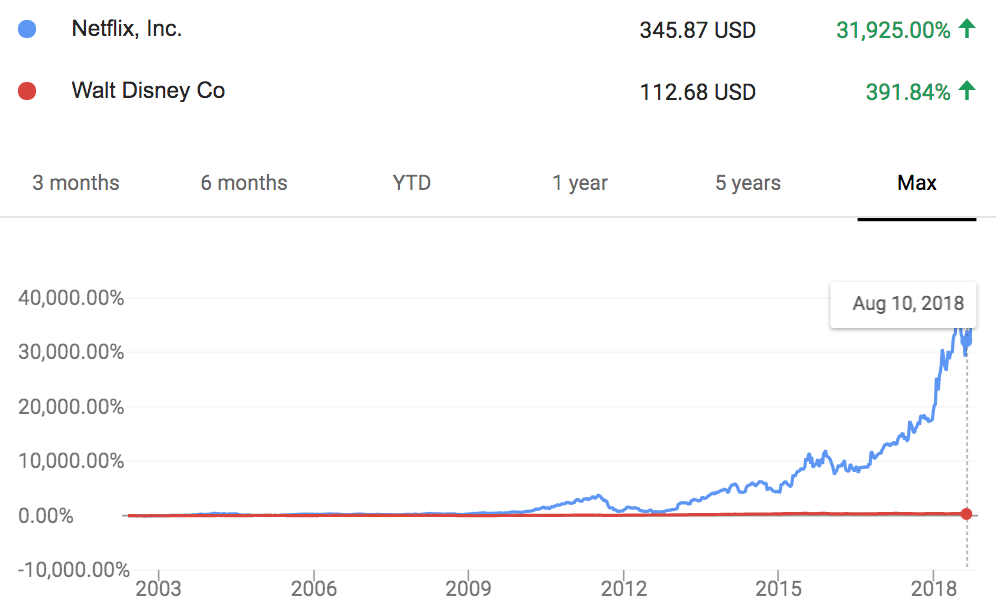 A. Of the artists you mention, I predict that the following will get into the Rock n Roll Hall of Fame (if they’re not already, I don’t know): Def Leppard, Todd Rundgren, and The Cure. I’d follow those three up with: LL Cool J, Rage Against the Machine, and then Radiohead. I’m judging these bands on how influential they are, not by any other standard. Not sure if that’s the metric it takes to get into the RnR HoF or not though!

Q. Have you changed your opinion if CALX? Thanks.

A. No, and you guys would be the first to know if I did change my mind and decided to sell CALX. Remember that this is a “binary” outcome stock, meaning that if they win lots of contracts from Verizon and other carriers in the next year, the stock could really rocket. On the other hand, if they don’t win any contracts, I think the stock could be down 30-50% from these current levels. I’ve got a tiny position in CALX and am planning to hold it tight for now.

Q. Here’s an article with more on the social media companies, this time Google. A. Big difference between “exposed data” vs having my account hacked and taken over! I think Google+ was due to get shut down anyway by the way. I expect Google would have let me know by email immediately if they’d found out my account had been hacked, unlike Facebook did.

A. Big difference between “exposed data” vs having my account hacked and taken over! I think Google+ was due to get shut down anyway by the way. I expect Google would have let me know by email immediately if they’d found out my account had been hacked, unlike Facebook did.

Cisco will remain one of my biggest positions...
Family first today (and every day)
Subscriber Chat Room Archive (September 19th-September 25th)
Cody's Trades of the Week for December 19-23, 2016
Neck deep in research and our Live Chat at 2pm EST