It’s certainly gotten a bit uglier out there in the stock markets this week, hasn’t it?

I’m still mostly sitting on the higher cash levels I’d raised this year and holding my hedges, which have really started to kick in (and I might trim some of them soon, just to be disciplined).

And getting crushed along with the markets this week is a stock that’s probably the most hated tech stock in the world at this moment. Snap. And sometimes, it’s when at stock is at its most hated that it’s actually the best time to start a position in a name.

First, let’s do some of my proprietary fundamental analysis on SNAP.

The company is growing revenues about close to 40% per year this year and next, seeing sales go from $1.15 billion to about $1.6 billion.

Cash has decreased from about $2.2 billion to $1.5 billion over the last year. But the company is far from profitable and while the CEO Evan Spiegel sent out an internal note this week that included his goal to make Snap profitable in 2019, no analysts are modeling profitability for next year into the numbers, as earnings are expected to go from a loss of 56 cents per share this year to a loss of 42 cents per share next year.

Well Snapchat isn’t just any middling technology company. It’s one of the only handful of social network companies in the US, and social networking is a hundred billion dollar a year industry. It’s also growing at 30% plus per year. And Snap, trading right here right now at $6.70 per share is down 40% in straight line, is nearly 80% down from its all-time highs, is down 60% from the IPO and the chart looks terrible. 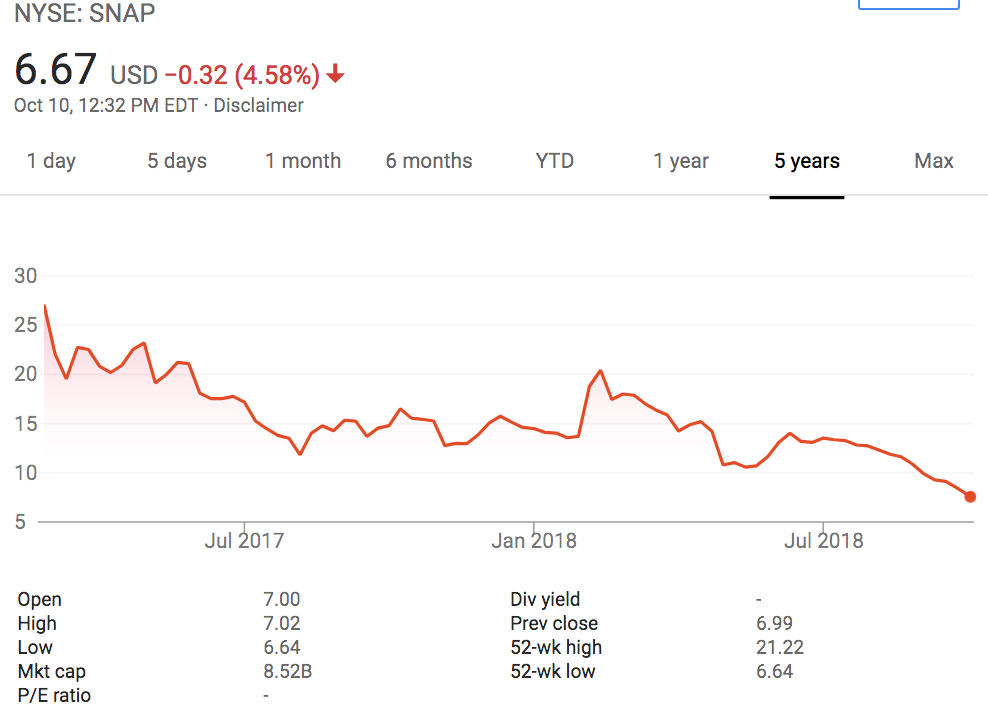 But that means the valuation might actually be, well, relatively cheap? Let’s look.

Snap’s market cap is right now at $8.7 billion, which means it’s trading at only(?) about 5x next year’s sales estimates.

And like I said at the top, I don’t think there’s any stock out there that’s more hated right now than Snap. Which is sometimes the best time to start a position in a name.

Here’s the deal though – we have to realize that this company could be in a death spiral here, because they will need to raise up to maybe $1 billion to get to profitability late next year. They’ll need to deliver on some growth in active users, average time on the app and average revenue per user.

But again, that’s where I look around and wonder if perhaps the market is missing the fact that Facebook/Instagram’s many recent privacy, data and hacking issues are actually directly benefiting Snap (and Twitter) right now. Facebook and Instagram are each many times the size of Twitter and Snapchat, which means that if just 1% of Facebook’s and Instagram’s user bases are doing what I’m doing — avoiding them both like the plague these days — there’s tens of millions of new potential users moving to and more active existing users on Twitter and Snapchat this month than last month.

I’m going to start nibbling a few shares of Snap here, starting with about 1/3 as many shares as I want to own — but to be clear, I won’t be making Snap a big position. Rather, I’m going to buy about 3 tranches of Snap over the next week or two, but even then, it will probably be my smallest position.

Over the next quarter or two, we’ll see if Snap can get their fundamentals growing faster than expected and if there’s a turn in the business towards profitability. If the company doesn’t get it turned around here, we’ll likely have to sell this position for a small loss in the next six months. If the turn around happens here, I might end up nibbling even more of the stock at what would probably be higher levels than we are at right now.

Easy does it out there. As usual. But let’s also be cautiously opportunistic. As usual.

Trade Alert: Cleaning Out A Few Names Here On The Other Side Of The Bubble
Trade Alert: Raising cash and reducing risk
Trade Alert: One nibble, one trim, one sell
Trade Alert: Taking a tranche of profits on JRJC puts PLUS Analysis on Apple, The Fed and the Alibab...
Trade Alert: Apple trim and analysis for each of the portfolio positions