There’s palatable fear out there finally, and unlike last week, I doubt that tomorrow’s Live Q&A Chat at 9am ET will be full of people looking for stocks to buy. In a contrarian way, that’s a bullish thing and since most near-term market turns come when sentiments get extreme in one direction or the other. On that note, I just put up a poll on Twitter asking my usual: Who’s more scared now, the bulls or the bears? You can place your vote here.

One of the first lessons I learned on Wall Street was that the markets tend to make a fool out of the most number of participants as often as it can. That market is not always a nice guy. That is, when sentiment among traders and investors gets wildly one-sided, either bullish or bearish, the market will often put in an immediate move in the opposite direction from what all that extreme sentiment was expecting. As I’ve explained many times over the years:

Over my more than 15 years of writing about the markets in public, I’ve occasionally asked, “Who’s more scared right now, the bulls or the bears?” to try to get an idea of when the sentiment of the mainstream trader and investor has gotten lopsided.

For example, back almost exactly two years ago, the poll showed 99% and then 100% “Bulls are more scared” readings in August and September 2011.

From 2009 to 2013, I didn’t see a 85% or higher reading of “Bears more scared”. And any poll I’ve taken over the last few years and the effectiveness of it as a tell for the last eight years was reflective of the bull market that we have indeed seen bubbled up since 2009.

My point is that I do think sentiment is likely quite extremely bearish right now and that the bulls’ fear is palpable enough that I want to see what the poll results might show anyway.

Even if the poll happens to show, say, 100% “Bulls are more scared” right now, I wouldn’t necessarily expect the stock markets will bounce huge instantly from here but I do think they’ll likely stabilize a bit near-term. Let me put it this way, I’d rather be buying stocks, selling puts, covering some shorts than selling stocks and getting all short positioned here today.

That said, I continue to preach caution and cash and hedges and being careful with your money!

Here’s a picture of a big bull elk I took from my drive way the other day. Do you ever think about how a bull elk has to shed its antlers each year in order to grow them bigger the next year? See the market analogy there and see me in the morning for the chat. 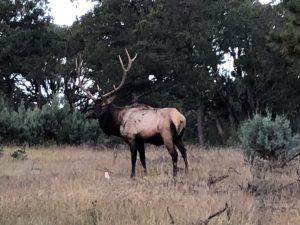 I’ll explain more about the options trade I did tomorrow in the chat too, as there is already a question about that in the chat tonight.

This week’s Trading With Cody Live Q&A Chat is tomorrow (Tuesday) morning at 9am ET. I’ll also take questions over the phone on our conference call line (Dial-in: 641-715-0700 Access Code: 709981) or just hit reply on this email to send us your question.