In the middle of October’s stock market tanking (as I started to take some profits on the put hedges we’d been buying when the markets had been making new all-time highs in September), I wrote that “the very stretched and bubblicious valuations that are rampant from a bottom up perspective (bottom up meaning that we’re looking at individual company valuations on a case-by-case basis) are now much more of a concern than they’ve been when we’ve had these past market sell-offs during this now-10-year-old Bubble-Blowing Bull Market.”

Many, indeed most all stock prices are down big in the last few weeks, but that doesn’t mean they’re necessarily cheap yet. Let’s look at Nvidia for starters. Recall that we built our position in this stock at $30 a share 2.5 years ago and that we’d trimmed some of our shares several times since then, including recently near its all-time highs at $270 or so. The company reported another quarter of strong growth, but guided Wall Street that revenues next quarter would be 20% less than the analysts were expecting because there’s too much inventory of the cheap chips that Nvidia as crypto miners demand has turned into additional after market supply. The fact is that Nvidia should have done a better job of cutting back on production of the low end chips and just focused on their higher end. Regardless, the fact that the company overbuilt low end chips doesn’t change the fact that this company is still Revolutionary and still in lead position in several Revolutionary sector from Driverless cars to the Cloud to Virtual Reality. That said, getting back to valuation, the stock still isn’t cheap.

After Friday’s sell-off, Nvidia’s market cap is $99 billion or at 8x this year’s revenue estimates which I don’t consider cheap at all. (When I bought the stock it had a market cap of less than $20 billion and was trading at less than 5x forward revenue estimates.) But because the company does 60%+ gross margins, the stock is trading at “only” 20x next year’s earnings estimates, which is getting quite close to this stock being cheap in my book. The risk is that earnings estimates could come down sharply for next year if the company doesn’t get through this inventory glut in the next quarter or two. I’d feel a lot better about our margin of safety if the stock were at 6x next year’s earnings and 15x next year’s earnings estimates. At those levels, it could really be a strong buy. But at this level, it’s somewhere in purgatory between being expensive on the topline multiple and barely cheap on the bottom line multiple. So there’s that.

And let’s look at pot stocks that everybody used to ask me about every day but now that they’ve been crushed, I’m not hearing as many requests about them. CGC is trading at nearly 100x this year’s sales estimates and doesn’t have earnings. Even though CGC is down more than 40% from its recent all-time highs, the stock is still worth as much as Campbell’s Soup. If I had to own one for the next year, I’d rather own Campbell’s Soup CPB than CGC. You know I do believe that we’ll have some great opportunities in years ahead to invest in The Cannabis Revolution, but at this particular moment, I still think the valuations in the cannabis sector are way too bubbly.

Take TLRY as our next example. Tilray is trading at more than 200x this year’s revenue estimates and at about 100x next year’s revenue estimates. Growth rate for the topline of 200% is expected for this year to next, but let’s assume that Tilray doubles their revenue every year after that for the next three years. That would give them $1 billion in revenue in three years, meaning the stock is trading at 10x 2021 best case scenario revenues. Let’s assume very high Nvidia-like 60% gross margins and net margins of a best case scenario at 20%. That’d give you about $200 million in earnings in 2021, so the stock is trading at 50x 2021’s best case scenario earnings. Again, I don’t like the valuation and I don’t like the margin of safety at these valuations in the pot stock sector.

Feet to fire, I imagine that at some point in the next year or so, these stocks will trade down even more harshly than they already have and that we’ll get a chance to buy them at a lower price with a better margin of safety.

I continued in that October article writing, “Likewise, top–down analysis (meaning that we’re looking at a the market/sector/economy from a macro level) there’s a lot more risk of market/financial/economic damage from the ongoing The Great Trade War of the 21st Century, tight labor markets, inflation, higher/spiking interest rates, The Great Endless Currency Wars of the 21st Century, years of QE and below-natural interest rates, developing markets crashing (ever farther than they already have), those aforementioned bubblicious valuations and so on.”

The economy and most sectors have cooled in the last few weeks. That’s not good, but it is good that everybody now recognizes it.

Next I wrote, “On the other hand, corporate earnings growth remain strong (for now?), there’s still trillions of dollars of corporate stock buybacks to hit, and all these employed and in-demand people who are both labor and consumers feel pretty good no matter the recent stock market volatility.”

Well, corporate earnings growth has been strong in many cases, but a great many meaningful earnings reports were full of cautious commentary about the economy, inflation and supply chain issues as well as being full of lowered guidance for this year-end quarter and/or next year. With all the supply chain disruptions and Fog Of War casualties from The Great Trade War of the 21st Century impacting earnings and guidance and confidence, there’s increasing risk to corporate earnings growth.

Indeed, here five weeks later, with stock prices much lower and the question really becomes whether or not those making billion dollar investment decisions about the next five or ten years are going to start reflecting the increased cautiousness that we see amongst investors right now.

I’d noted in that October article: “In the meantime, it looks like stocks will open quite ugly this morning down at least another 1% or so at the open. And I’m going to trim another 1/3 of my remaining puts, leaving me about half of my QQQ and SPY puts that I had just two days ago and that we had finished scaling into on the exact day that the markets hit their recent all-time highs.”

I’ve rolled out of those puts and now I own a few number of lower priced puts. Trying to game the day-to-day and week-to-week gyrations in this volatile market is near impossible to do consistently enough to stay ahead of the next market move. Besides most daytraders and swing traders were all but wiped out in the last six weeks as the high-fiving has ceased.

Finally, here’s how I finished that October article: “I’m far from outright bullish here, and this recent pullback is exactly what we’ve been set-up for and almost predicting on cue.

Long-time Trading With Cody subscribers will remember that when this Bubble-Blowing Bull Market was in years 1-5 (from 2010-2014) I often would aggressively buy our stocks and even nibble some index call options when the markets would tank like they are right now. I was less aggressive during most pullbacks in 2015 and 2016. But those were different markets, in a different phase of this economic and market cycle and valuations/expectations were much lower. That’s just not the case right now, though I do think it’s probably not a bad time to start nibbling here and that it’s probably a good time to lock in some profits on these puts at this ugly market open.

Let’s take some profits on these puts, let’s continue to be cautiously opportunistic as we were by starting a new position in SNAP yesterday, but let’s be patient in seeing how this market plays out.”

Stock prices are a bit lower and some of my own names are quite a bit lower, but I’m not ready to plow back into the shares we’d trimmed at higher levels. I will be opportunistically putting money to work and/or taking some more profits as the markets throws us whatever pitches it will in the next few weeks into year-end and the hedge fund launch.

I’m going to write a Latest Positions update with new analysis and Revolution Ratings for each of my positions this week so stay tuned for that.

And stay careful out there.

Here’s a couple recent shots from around my property, including a shot of Lincoln County’s wild horses running in the snow. 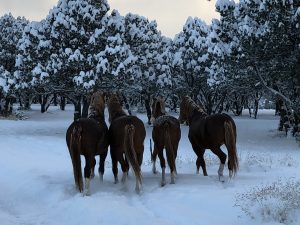 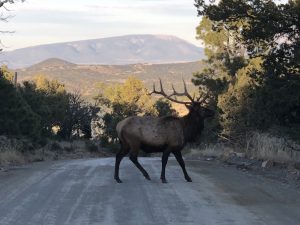 Cody Kiss & Tell: 401k, Whole Foods, Getting more bullish and more
Sloppy into the close is how it goes.  I...
Poll Results: Bulls are terrified
Update on the Netflix trade
My latest positions