“Interest rates are still low by historical standards, and they remain just below the broad range of estimates of the level that would be neutral for the economy — that is, neither speeding up nor slowing down growth,” Powell said in a speech at the Economic Club of New York on Wednesday.

Here’s what you need to know about the Fed rate cycle and how it is likely to impact stocks short-term and long-term.

Conventional wisdom says the the markets will go up if the Fed starts cutting rates. Which is somewhat true, but it’s all a matter of timing. Here’s what we’ve allowed our economic and stock market system to become.

Here’s how all that looks in a 30 year chart: 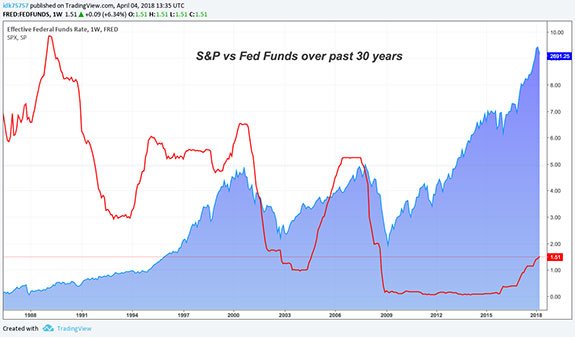 What’s correlation and what’s causation here? Yes. The whole system feeds upon itself and correlates with itself and causes itself to correlate with the system’s cycle. Haha.

Here’s our playbook then.

For the next few weeks or months, the markets are likely to spike for a day or two anytime the Fed signals that they’re going to stop raising rates (just like yesterday’s action). If the economy has indeed started to take a real downturn here we’ll start to see that in the earnings reports and stock prices will continue trending lower over the next few weeks and months.

If that’s the case and/or if the Fed sees something alarming in the system, the Fed will actually completely reverse course and start cutting rates and that would signal to me that we probably need to raise even more cash and add more downside hedges. The market would probably rally a good 3-7% were the Fed to announce a rate cut, which would probably give us a terrific opportunity to trim, sell and/or short.

On the other hand, if the reports and earnings are strong and the Fed holds rates steady here, we’ll probably see a bit more of the Bubble-Blowing Bull Market in the months ahead.

Either way, this set-up here for the next few months is going to give us a lot of opportunities to invest and trade. We’re on for it.