Here’s the transcript from this week’s Live Q&A Chat, including topics like the ongoing crypto crash, what albums I’ve been listening to lately and what happens if the Fed cuts rates.

Q. Cody are you surprised by the extent of this very positive start of the year? And do you think this buying is by strong hands or weak hands?

A. Yes, I did think the markets would likely be up in January, but the straight up relentless rally was surprising. Strong hands, weak hands question is interesting. I do think there are some strong hands buying I suppose.

A. I’d expect the stock markets to maybe rally 5% on a “Trade Deal.” If the Fed were to cut rates, it might alarm the markets at this point.

Q. Cody, any Chinese stocks you would consider for your hedge fund or same principle as for your personal portfolio, no Chinese companies?

A. I’d rather be long than short the biggest cap Chinese tech stocks for 2019. But I never get comfortable investing in company’s that are regulated by an autocratic Communist regime.

Q. How do you feel about using LEAPS instead of purchasing actual shares of your recommended long positions?

A. I use some LEAPS to complement some of my long positions, but I probably wouldn’t want to just depend on the LEAPS. Timing can be tricky if the happen to expire in the midst of a market sell-off and you lose everything on the LEAPS.

Q. Cody Do you ever trade gas?? My weatherman (weatherbell. Com) is predicting serious cold for Feb 9th thru mid March in the eastern USA. UGaz is hitting lows not seen in a few years. Weatherbell predicted this winter in August and has been spot on. Think the gas market will spike like it did in November???

A. There are literal rocket scientists at Citadel and Goldman who are using algo’s and weather to make hundreds of millions of dollars per month trading natural gas. I don’t plan on letting my hedge fund’s money be a part of their profits by trying to game

Q. How does QCOM look given the turmoil with multiple court cases regarding IP and Contract violations, in multiple jurisdictions? Stock is at the same level as 10 years ago!

A. I’ve mostly avoided QCOM for the last few years as these controversies about its business model and the fight with its customers escalated. Now though, I tend to think, that much of this mess is priced into the stock here. That said, if the company were to lose the anti-trust case the stock would probably drop 20%, but that might actually be the best thing to put a real bottom in stock here right before the company starts to benefit from 5G. QCOM’s not a big position for me and I’ve left myself to buy some more if depending on how the court cases play out.

Q. Both BOX and VHC put options have not worked. Are you still holding them ?

A. I’m about break even on the VHC puts. But the BOX puts, the ones I have left, are losers and aren’t worth much here and I’ll probably just hold them as disaster insurance. I’ll be selling some of the VHC puts on stock weakness.

A. I haven’t looked at SWIR in years. I’ll take a fresh look.

Q. Hi Cody, regarding DELL, I haven’t started a position yet, do you think +50 is still a good entry point or wait for an eventual pull back? I believe much of the value is Dell is in VMware. Throughout VMware’s history it has been majority owned by someone else. Previously owned by EMC and now owned by Dell. Do you feel that this value can be unlocked at all in Dell? Most long EMC short VMW trades failed and the DVMT stockholders seemed to have taken a bath.

A. I avoided DVMT but now it looks to me like with DELL’s recent “IPO” and the VMW chunk we own as DELL shareholders and the potential for DELL to actually benefit from The Cloud Revolution — DELL’s an attractive stock here. Even after it’s run 20%, that means the 6 P/E is now just about a 7.2 P/E. I think DELL could trade at 10X earnings and that if they deliver any upside to revenue/earnings estimates, the stock could go to 12x a higher earnings estimate…That said, the stock could certainly pull back some here as its gotten extended.

Q. Good Morning. Hope Amaris is doing well. On GLUU, at what level should we start covering?

A. Last night in their earnings report, GLUU missed on the topline, guided the 2019’s numbers slightly lower than estimates (and called it a “guide higher”) and at least 10% of 2019’s revenue guidance includes revenue from games that won’t be in the markets until this summer at least as it continues to promise three new games that keep getting pushed back. I’m surprised the analysts didn’t just demolish this stock with downgrades and lowered price targets this morning. I’d probably sell some of the puts and maybe cover 1/4 of the short or something like that. But I’ll probably not rush out of it.

Q. The TWC portfolio currently includes four cryptos, all in the Top 10 in market cap. Are there a few outside the Top 10 that you find particularly intriguing as possible survivors of the ongoing Great Cryptocurrency Crash?

A. I occasionally come across an interesting crypto but most of them aren’t available to the general public just yet. I also keep coming across questionable crypto concepts.

A. Who are these people who trusted some dude to cold store their cryptocurrencies? What the heck?

Q. VFC. My son and his peers wear Vans. A lot. A lot a lot. The financials on this company seem appealing. What do you think?

A. VFC’s quarter was strong in large part because Van’s was so strong. I see kids in the elevators and at the malls and at hospital wearing Van’s. That said, I’m not a big fan of trying to game fashion trends and their impact on a conglomerate’s stock like VFC.

Q. Do you have any thoughts on AVGO short? It is hitting a 52 week high today.

A. I’ve tried to trade around on the AVGO short a bit but mostly have kept it small. I wish I’d just never shorted it at all at this point, of course. I have been trying to use it as a hedge against my NVDA, INTC and other semi longs and I suppose it’s been okay in that regard. Shorting is hard.

Q. Cody, Thank-you for all of your hard work. What is your opinion on Docusign (DOCU)?

A. It’s a good company, nice growth. Expensive though.

Q. Where are you at on AMD, after this decent run? Are they finally turning this around?

A. I’m sidelined on AMD. Not a believer, not a hater.

A. No. probably not. Unless there is some specific new catalyst for each that you know of that I don’t know of.

Q. Any more thoughts on OPRA? Do you see any catalysts or just looking for organic growth?

A. Mostly think it was just screaming cheap. Still is cheap. Lots of potential growth.

Q. What artists/albums have you been listening to the most lately?

A. I’ve been listening to two albums, one from Drivin’ n Cryin and one from Sinead O’Connor plus music from Taylor Stearns and more. I’ll include a screenshot of my most recently played from Spotify in the transcript. You’ll be surprised I’d bet. 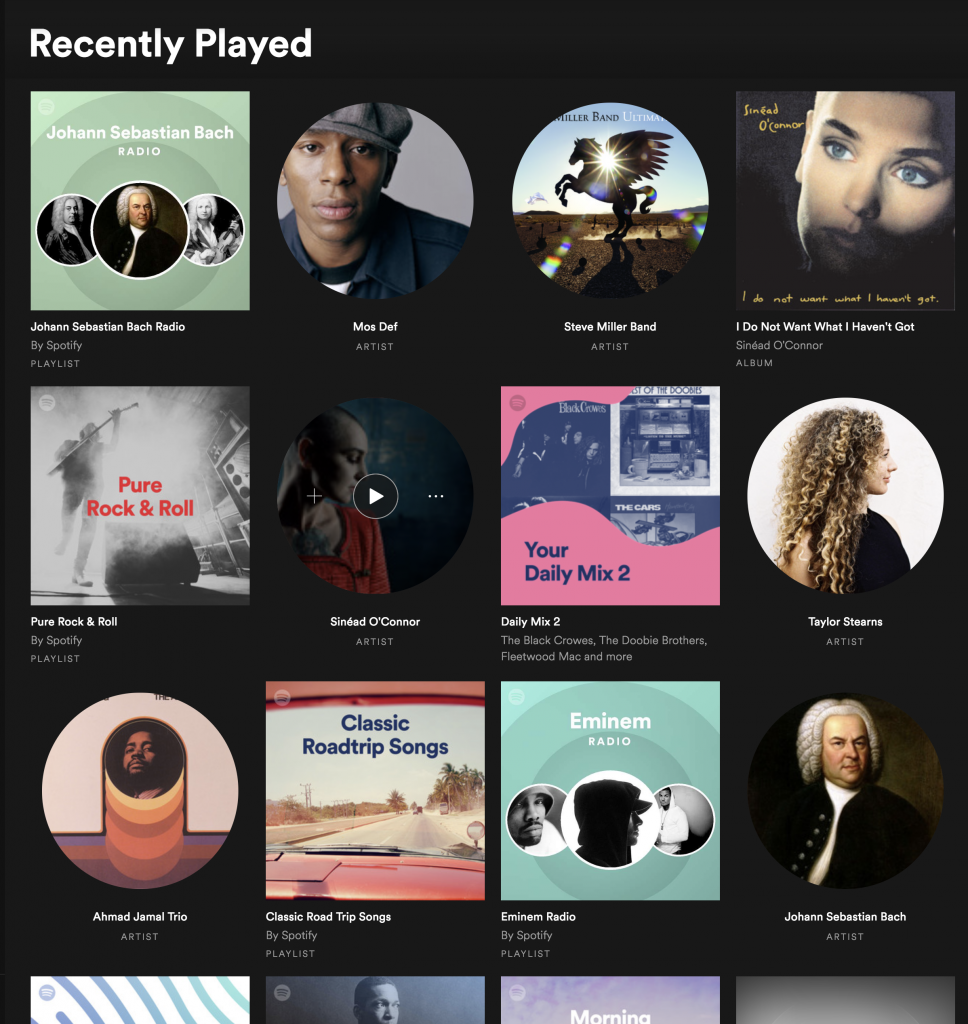 Disclosure: At the time of publication, the firm in which Willard is a partner had positions in some of the stocks mentioned above although positions can change at any time and without notice.

Crypto Changes The Stock Market (Plus Updates on AMZN, AAPL and FB)
Special 40 page report: Why stocks usually go up when the Fed starts raising rates
Carbon Credits Scam, Intel Vs TSM, EV Bubble And More
How we've made our biggest profits
Well, losses in our SLV and RVBD positio...