Well, this move in Qualcomm’s been pretty amazing. If you happened to have to bought some of the QCOM call options that I’d written about twice this year, you’ve likely got 15-20 baggers on them now.

That said, recall that I’d mentioned I’d bought long-dated out of the money call options in QCOM when I was building that position when the stock was near $50 a share, much lower than it is right now. Including those call options notional value, QCOM’s right up there near the Top 10. From January 25: “I bought some QCOM common and some QCOM call options with strikes ranging from $55 through $60 and dated out from April through next January. Stock has been crushed, short sellers proclaiming how it could drop in half, lots of negativity around this name. Meanwhile, the dividend is nearly 5% and Qualcomm will be one of the best 5G plays in the world regardless of how their court cases play out.”

So here’s the playbook now:

If you’ve got some QCOM common, trim some, but not too much. I did some of this.

If you’ve got the QCOM call options, trim some perhaps, maybe hold most for now. I also trimmed some of these calls.

Alternatively, you can roll your call options up to higher strikes perhaps, selling these and buying calls slightly out of the money (I didn’t do this). Or perhaps best is to just hold most of you call options and then just take the stock when the options expire (I expect to do some of this).

All that said, the fact is that QCOM is one of the best pure play 5G companies out there right now.  They have what appears to be a lead in 5G for the chips they sell.  They also have a lead in patents for 5G.  The next two years especially should be good for them. The company is likely to earn more than $6 per share in the out fiscal year . Then the PE is 11.7X next year’s earnings.  With a 3%+ dividend yield. 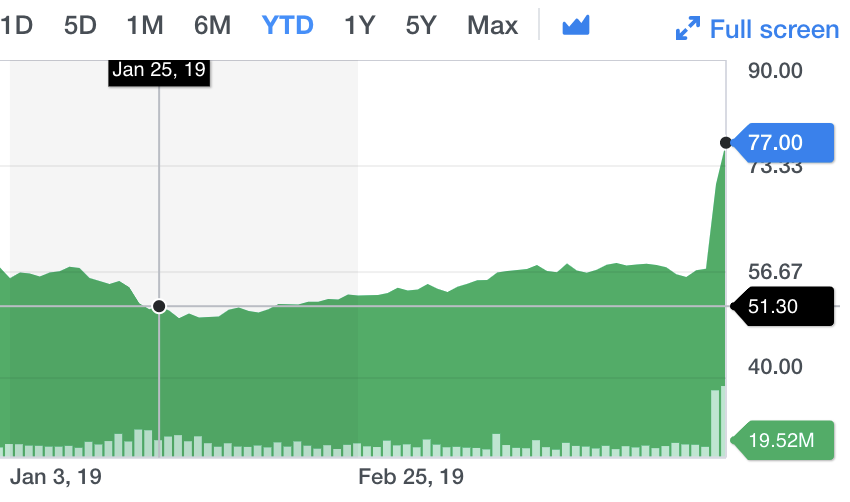 Sweet chart, and nice timing on your Trading With Cody Trade Alert, eh?

Now, of course…what’s next? Let’s get back to work.

What The Headlines Will Say About Coronavirus In A Month
Trade Alert -A cheaper way to bet on some bubbles popping
The hardest trade to make right now is... (and Trade Alert: Trimming CPB)
Trade Alert: Doing some buying as the bulls panic
Trade Alert - Time to shift focus from components to infrastructure