Since I was in Austin on a business trip, my wife received her Tesla Model 3 with the Full Self Driving computer Tuesday morning without me. She drove it to work and lunch and gave her mother and father and colleagues a ride in it on one of the main two streets in Ruidoso, NM.

I drove the car around on that same street a few times yesterday when I got the chance to drive it. I put the car in cruise control as I drove around. The car’s display showed our Model 3 going through gray bars to indicate the lanes on the road. If you didn’t turn the wheel as the car veered off the main road, an alarm would sound, the steering wheel would haptic response you as the car would help you turn a little bit. Just like the helpful driving feature in most high end car systems. That’s fine and all. Meanwhile, it’s also pretty incredible how the car would stop itself and accelerate by itself when in traffic or at a stoplight when in cruise control mode.

The way Tesla’s autonomous driving technology works is that it uses mostly GPS and cameras and radars to guide you. It also requires data gathered from Tesla’s fleet of cars on the road to teach its neural network some further guidance and patterns in the roads.

When I started turning on the Full Self Driving feature on my drives around Ruidoso’s main streets yesterday and the car chimed and the lanes on the road on the car’s display suddenly turned blue. The car told me to keep my hands on the wheel, but quite honestly I probably didn’t need to any more. I plugged in my wife’s office address and the car took us to the turn off where I took over. We went through a main street on Ruidoso where the speed limit varies from 25 to 45 mph with numerous traffic lights, intersections and changes from two to four lanes and back again. Several times on those lane convergences, the traffic has been relatively tight with cars merging together at 30 to 40 mph, and — as I kept my hands on the wheel and remained vigilant and ready to take completely over again if the car’s handling of the situation got worrisome — the Tesla FSD has handled every one of those interactions in ways that felt every bit as a smart safe drive would. And the first few times the car takes over and is handling all this stressful driving for you, your mind is completely blown. I mean, you just can’t believe that the car can do this as well as you can. But it is! 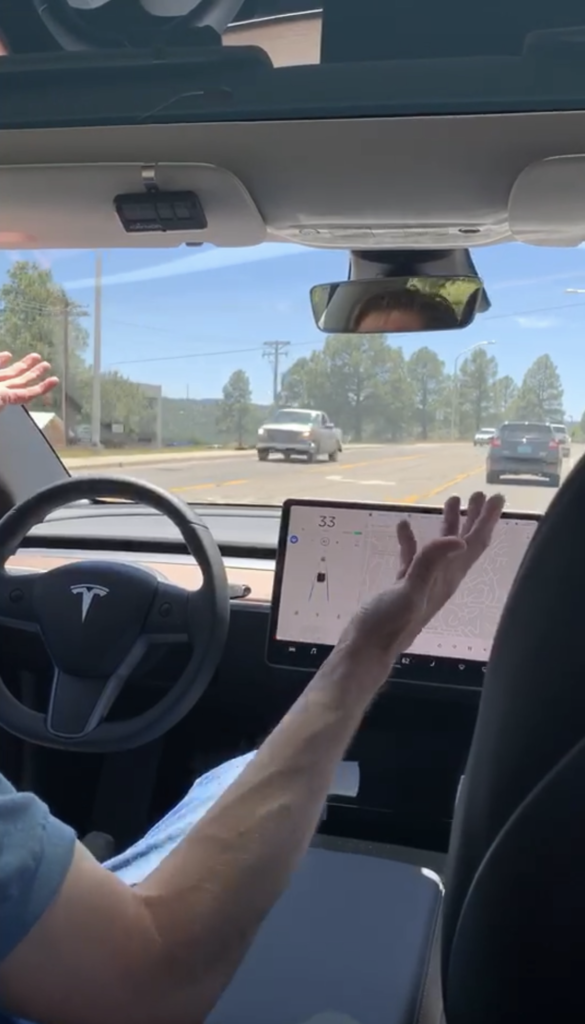 On the main roads in Ruidoso and on the highways around Ruidoso, I am shocked to realize that I actually feel much safer knowing that the Tesla’s doing most of the driving. I’m just assisting, really. And given that I’m an admittedly terrible driver, I feel much more confident that I’m not going to get pulled over for not paying attention to the speed limit or taking a curve too fast or something when the Tesla’s FSD is on.

We got a new update in the car just last night that says it will start handling some traffic lights. I tested it this morning and it didn’t quite work, so I simply braked the car for the car and took over from the system which was sort of like taking over from a car in cruise control when you approach a red light anyway in this case. When I did that action by the way, Tesla’s neural network is learning from it and will continually improve itself from that data.

We were the first people in NM to get insurance from State Farm on a Tesla Model 3 apparently, because they had to manually input the model into their system when we ordered car insurance for it. We’ll obviously be switching our insurance to Tesla to save money when they start offering it next month. And think about how the insurance model works — you take a ton of money in up front each month (providing much needed cash to Tesla) and paying out claims in the future.

Did I mention the car is the by far the fastest and best handling car I’ve ever owned? It’s whiplash fast if you really punch it and handles every corner with comfort. Speaking of comfort, the front seats are couch-like and leg room exceedingly ample. The backseat is fine.

If you ever spend more than $35,000 on a new car that’s not a Tesla again, you’ll regret it. The thing’s a fricking space ship from the future. Not to mention that when you buy a Tesla you potentially save hundreds of gas monthly (my wife sure will). In a year or three, you’ll be able to let it create income for you as a robotaxi when you’re not using it. And it’s an ever-improving, ever updating computer on wheels.

As far as the stock goes, it’s been tough lately obviously. I own a bunch of Tesla and have nibbled more here in the $230s/low $240s. If the company doesn’t deliver 400,000 cars this year, the stock might still be around these levels or lower — it could be much lower if something really goes wrong, of course. If Tesla delivers more than 400,000 cars this year, the stock will be much higher. The company is trading at 1.3x next year’s sales estimates and at about 30x next year’s earnings estimates. And that would mean we’re valuing driverless, robotaxis, semis, trucks at just about $0. Don’t forget that you’ve got the new money raise and even some Tesla insurance to help fund all this.

I was obviously concerned that I might be disappointed in the Tesla car and especially in the Full Self Driving computer. I’m not. I’m every bit amazed as I hoped I would be. And as a recent skeptic turned believer, a recent bear turned buyer of TSLA, my hopes were HIGH.

My 5 year old made me take her for a drive this morning before I could leave for work. My wife and I let the car drive us around last night for a while too. It’s truly the most fun, coolest purchase I’ve made in years.

I don’t confuse loving a purchase with stock analysis. But I also don’t ignore the power of a now personally-validated Revolutionary product and technologies that are on exponential growth curves.