Stocks today seemed to continue what’s bee in a bit of a pause/pullback phase, just about as I’d expected in my recent short-term markets analysis in which I’d written:

Maybe we’re finally about to get a calm period after a year of wild action, mostly up with a whoosh down too? Or will earnings seasons be a reason for something more serious?

The markets are waiting for earnings season to see if The Great Trade War has impacted business trends enough to hurt earnings (and revenue growth). There’s no doubt that the Huawei ban/not ban/ban is going to be felt throughout the smartphone/5G/chipset supply chain. Recall that just three weeks ago, Huawei quantified how much the ban/not ban/ban is hitting their business this year —

Revenue of about $100 billion for Huawei in 2019, a decline from last year’s roughly $107 billion, following lower-than-expected growth in the wake of a U.S. export blacklisting and other actions against the Chinese technology giant. Mr. Ren had earlier targeted 2019 revenue to come in around $125 billion.

Think of this way, Huawei lowered guidance this year by same amount of revenue that the entire company generated just six years ago. 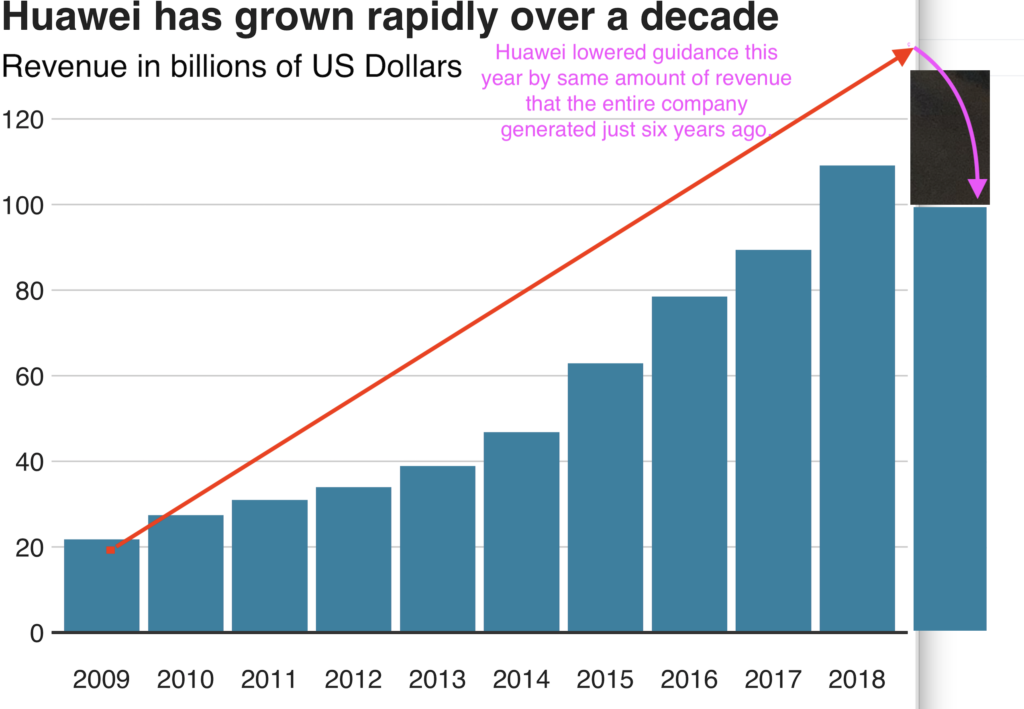 Meanwhile, Samsung dumped their bad earnings update into the Friday of July 4th weekend (I know they’re not in the US, but still, a Friday afternoon news dump is still a Friday news dump) and had this to say:

“Revenue is projected to slide about 4 percent to 56 trillion won ($47.89 billion)” which is probably 10% less than they’d expected to generate in the last 90 days.”

Of course, Samsung’s stock is still up this year (Huawei is “private”/owned by the Chinese government, although both the company and the government say otherwise).

So there’s at least, say, $50 billion dollars worth of revenue that these two companies won’t be generating this year that they’d earlier been expecting to. $50 billion in revenue at the two largest handset manufacturers/communications/chips businesses is certainly going to be felt in the technology supply chain.

And of course, there’s also the fact that there continues to be a building chill in the US/China travel and business investment plans, partly because Huawei’s CFO (founder’s daughter) is still under arrest and awaiting extradition to the US. You think the CFO of Cisco wants to go to China right now?

For the last nine years, we’ve continually looked past geopolitical worries and Permabear promises of an end to the Bubble-Blowing Bull Market we’ve been riding. But this time I’m a bit more worried as the real-world impact from this particular geopolitical worry is a little bit bigger than say, Greece or Brexit, and is starting to be quantified in a meaningful way.

That’s not to say I’m bearish overall. In fact, if the market punishes the tech sector hard enough in the next few weeks as earnings and revenue guidance likely come in soft, we might see some terrific buying opportunities. Otherwise, I plan to mostly sit tight on my existing net long positioning and keep a bit my built up cash on hand.

Don’t forget that we’ll do this week’s Live Q&A Chat tomorrow morning at 7am ET in the TWC Chat Room or just email us your question to support@tradingwithcody.com.

And before I go, just 24 hours after you guys read...
This ain't Grandma Susie's economy: The need for new money and retirement strategies
Live Nation, one of our shorts, got an u...
Top 5 most shocking stocks that have doubled in the last year
Dislocating markets