Here’s the transcript from this week’s Live Q&A Chat, including a discussion about gene editing technologies, how much cash is too much and much more.

Q. I know it depends on your situation, but I’ve been trimming and trimming and not buying anything. Currently about 40% cash… too cash heavy? Am I missing out or being prudent?

A. You are correct that it depends on your situation. If you’re 80 years old and just retired, being 40% in cash might be just about appropriate. But if you’re 40 years old and upwardly mobile in your career, that’s probably too prudent. You’ll regret being too defensive if the market rallies hard here, but I think you might regret being too aggressive if the markets fall here, even more. No easy answer, obviously.

Q. I hope all is well with you and your family. Do you think the Fed will cut rates this month? Does it affect your outlook whether they cut rates or not in July? I remembered you saying the first rate cut is negative overall.

A. Here’s my latest analysis on how I’m playing the Fed set up here. As for the Fed saving things…well, as an old colleague of mine wrote in the WSJ today, it’s usually NOT bullish for stocks when the Fed first cuts rates. Indeed, market have tended to crash after the first Fed rate cut during my investment lifetime: “Fed officials this past week made it clear that they are worried, and their dovish comments fueled a 4.7% rally in the S&P 500 over the past four trading sessions. But cheering the Fed for starting to cut rates can be a dangerous thing for investors. In January 2001, for example, the Fed announced a surprise cut that sent the Nasdaq up 14% in a single day, which remains the index’s largest move since its creation in 1971. Some of that era’s beaten-up tech darlings made significantly bigger jumps. Sun Microsystems and eBay each jumped 30%, for example, while JDS Uniphase soared 37%. But there still was a recession ahead, and more carnage in store for the market. Following that day, the Nasdaq would fall 57% before hitting bottom in October 2002. Then there was the Fed’s rate cut in September 2007, which gave the Dow Jones Industrial Average its biggest one-day percentage gain since 2003. Fast-forward one year, and the U.S. was in the teeth of the financial crisis.” Of course, as Justin also points out, the first Fed cut doesn’t always mean that the markets are about to crash: “The hope is that if the Fed does decide the current situation warrants a rate cut, it would be able to guide the economy to a soft landing like it did when it started cutting rates in 1995. Or maybe it would be like 1998, when the problems the Fed was reacting to—Russia’s debt default and buckling global credit markets—ended up not putting much of a dent on the U.S. economy at all.” We’ll have to be flexible before calling an end to The Bubble-Blowing Bull Market and getting much more defensive if/when the Fed finally does outright cut rates.” Finally, here’s a free-for-Revolution-Investing-subscribers ebook I’ve written about this topic a couple years ago: How to predict and profit from the Feds bubbles and crashes.

Q. Given that all automakers (see this and this) are ramping up electric car production and trying to secure battery, is there any cell manufacture that we can buy?

A. Yes, Tesla. Seriously though, I’ve studied this battery technology quite a bit lately and I just think most of the supply chain in it is not profitable enough to invest in. Tesla’s got new battery tech coming on line that might help further differentiate their products.

PS. I just had a 70-something year old rancher dude stop by my office to ask me if he could see my Tesla Model 3. Gave him a quick ride in it. He’s sold and will be getting a Tesla car for his wife soon, I do believe. LOL.

Q. Any update on PANW? You mentioned you were going to do more research.

A. I’ve been working on it, having spoken to several resellers and customers of PANW lately. I haven’t changed my stance yet, but still working on it.

Q. Hi Cody, Have you researched CRISPR (Clustered Regularly Interspaced Palindromic Repeats) medical technology forming the basis of biology’s first immune memory, the most promising way to cure diseases like sickle cell anemia, cystic fibrosis and cancer? Paraphrasing Joshua Riegelhaupt, PhD writing in Baron Funds Quarterly Report, back in the early days of evolution, the greatest existential threat to a bacteria’s life was invading virus aiming to seize a bacteria’s factory to make copies of it.

A. Yes, I’ve been studying CRISPR off and on for the last five years. Clustered Regularly Interspaced Short Palindromic Repeats is a molecular Swiss army knife with a rapidly expanding number of tools. I found some quotes from Joshua Riegelhaupt, Ph.D, about it: “CRISPR is one of biology’s first known forms of immune memory in one of biology’s simplest lifeforms: the bacteria. Back in the early days of evolution, the greatest existential threat to a bacteria’s life primarily came from an invading virus that aimed to seize the bacteria’s “factory” to make more copies of itself for future propagation. The end stage of this process is bacterial death via viral overload and this, for obvious reasons, is a fate unacceptable to the bacteria. So, like all of evolution, the bacteria adapted. A virus like a bacteria has genetic code, i.e DNA or RNA, and all genetic code can be cut open and read for replication, protein production or alternatively for destruction. How the first cut of a viral sequence by a bacteria happened and how a bacteria then learned to remember this event remains an evolutionary secret, but what scientists now know is that the CRISPR system was the bacteria’s sophisticated way to protect itself from invading viruses.” There are several publicly traded companies who focus on CRISPR. But I’m worried that the technology isn’t ready for mainstream yet and there are some controversial aspects of CRISPR that need to be worked out a bit more too. I’m on it though.

Q. Hi Cody – With Jonny Ives leaving Apple, does this change your thoughts about them?

Q. Any thoughts on TradeWeb (TW)?

A. I don’t know the company well, but looking at their numbers just now, I have a lot more questions than answers. I see that their reported cost of revenue is somehow negative 2x in the last year. Topline is only going to grow less than 10% next year and the stock is trading at 12x next year’s sales and 45x next year’s earnings. And the company’s profile says “Tradeweb Markets Inc. is a subsidiary of BCP York Holdings” so I’d have to dig in more to understand the corporate structure here. I’m seeing too many redflags though.

Q. Cody – Do you think with Prime Day coming AMZN finally sails into 2k ranged. So far struggling to get over the 2k mark.

A. I’m not sure I’d say AMZN’s struggling to get over the $2000 mark as that level is just arbitrary. Also, I don’t think Prime Day will be a catalyst for the stock anyway. AMZN’s not cheap here but it remains a core Revolution holding. Feet to fire, I do think AMZN gets back over $2000 at some point this year, though I don’t know if it will stay above $2000 when it does get there.

Q. Hi Cody. Any thought on PI? Was in the portfolio at one time and really looks to be taking off now…

A. Yes, I’ve been watching it take off and I’ll put a call into the company and do some more research to see if it’s worth taking a shot at.

Q. Cody – Any thoughts on KO having entered into cannabis drink market and flirting close to 52 week highs? Is it ready to reap benefits of cannabis revolution?

A. KO has as good of a distribution network as any company on the planet and cannabis drinks is a growth market that they will benefit from. I’m not a big fan of KO at this valuation though. Great company of course.

Q. Cody – You think QCOM is ready to run higher after consolidating its huge move from few months back?

A. Depends on how badly Huawei’s ban/not ban/ban hurts Qualcomm in the next six months. I obviously am still a big believer in the company and stock here as The 5G Revolution burgeons.

Q. Cody, Is CSCO a good 5G play with the acquisition of ACIA?

A. CSCO was a good 5G play even before this acquisition of an optical company ACIA today. CSCO is also a beneficiary of the Huawei ban/not ban/ban.

Q. Any general thoughts on Bitcoin maximalism (basically the idea that Bitcoin will be the only cryptocurrency standing at the end)? Maximalists have grown louder with the recent run and underperformance of Alts. Following up on that.. how many cryptos can you see being around in 5-10 years? A handful, a few dozen or more?

A. I expect Bitcoin to be the biggest, but I expect there will be hundreds of smaller cryptos and various variations of cryptos.

Q. Cody – You still like XLM…..it hasn’t gained steam despite the BTC furious rally? Thanks

A. Yea, I still believe in Stellar. Smallish tho.

Finally, here’s a couple pics from my phone this past weekend when we celebrated little Amaris’s 4th birthday. Amaris liked her cake and the Bernice the Great Pyrenees likes to go down Lyncoln’s slide. 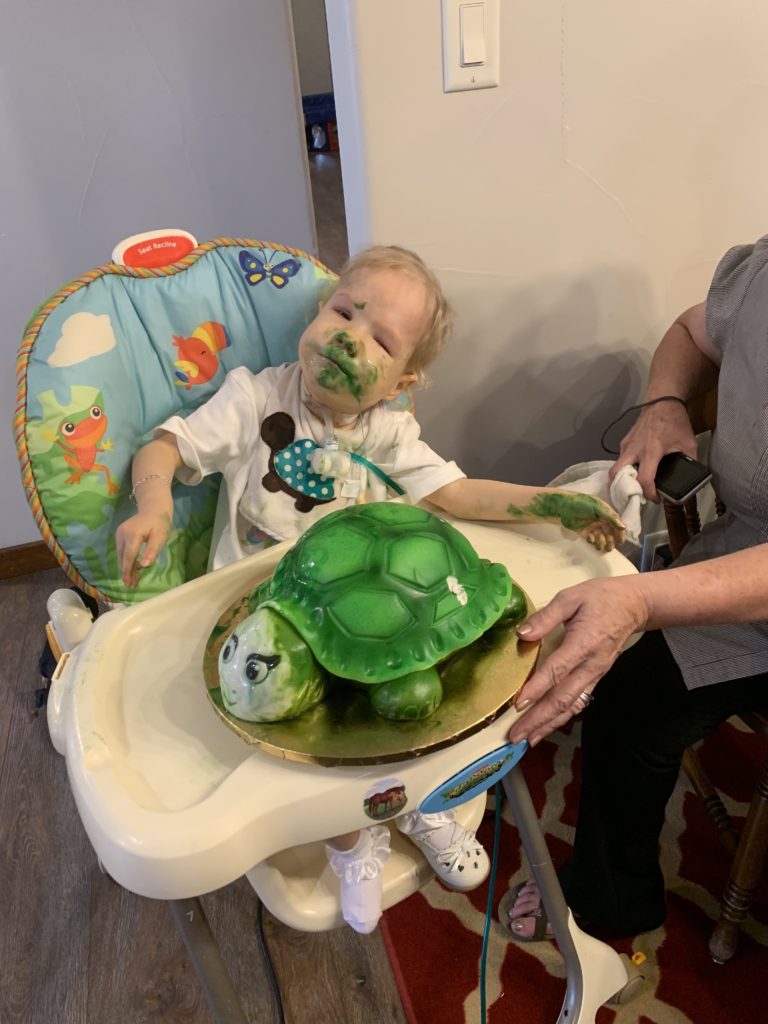 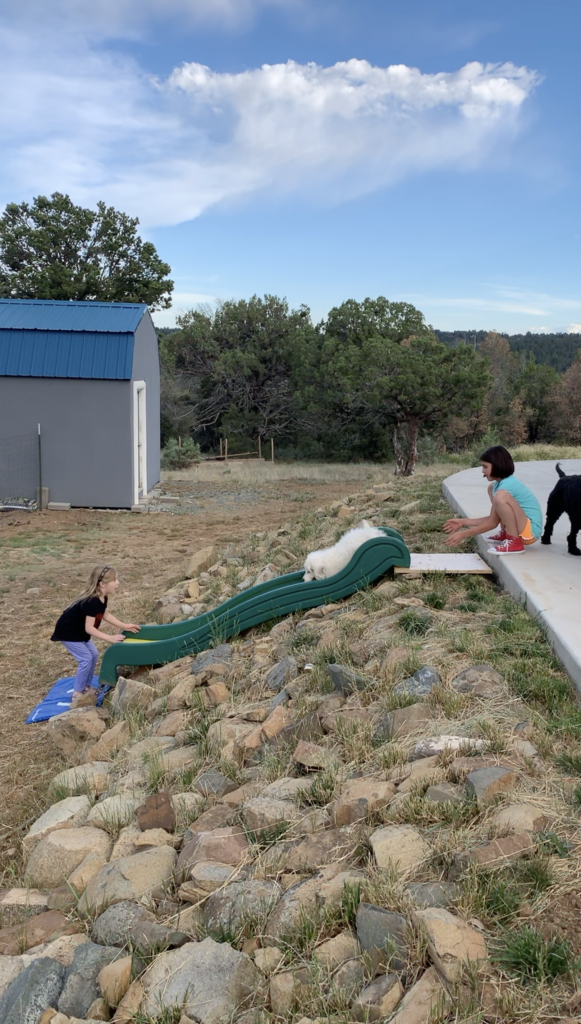