Q. Cody. If Fed cut rate 50 points, should we be ready to scale in with some index puts?

A. Frankly, I think it’s wise to scale into a few index puts before the next Fed announcement. Just to hedge a little bit while things feel frothy right now.

Q. Hi Cody, I bought TSLA Jan 2021 LEAPS when the stock was falling in May, expecting to buy the underlying shares upon expiration. What strategy would you use with long dated options? Were I to sell these, I’d buy the same number of slightly in the money calls options with the same long dated expiration. So, would selling them and rebuying another batch be worth it? Aside from tax consequences there are other cost factors. Thank you for your guidance and good luck in New York.

A. Well, the good news is that you’re asking this question while the stock is up and you’ve got some gains to work with. Given the details you’ve laid out for us, here’s the risk/reward scenarios: 1) You hold these LEAPS and let them ride. If your expectation was that you would eventually take the stock upon expiration (assuming the calls are in the money at that point), then you might want to just hold tight and follow your original plan. The risk is that the stock could fall back below those call option strike prices and then you would end up losing everything at expiry. 2) You could sell these and roll up into some higher strike price call options and lock in some profits. The risk is that you will lose some money in the slippage/costs of trading and that your new strike prices could end up being out-of-the-money at expiry even as your old call strike prices were in the money. Summary) Maybe try to have your cake and eat it to, by selling 1/3 or 1/2 of the LEAPs you have right now and roll part of that money into some higher strike prices.

Q. What’s up C.W.? TSLA into earnings? Live in Maryland and work at NBC in Washington DC, and man, do I see a whole lot of Tesla’s everyday, I mean a lot! They are everywhere! They have to be disrupting the auto industry, do you think we see blowout numbers, better margins, US/China pre-order numbers? What is Wall Street and the “shorts” really looking for? Percentage move after earnings guess?

A. When I drove around some 60/70ish year old friends from the country who had never even heard of Tesla (“Who makes Tesla’s and in what country?”) and they spent the next 3 days talking how incredible the Tesla Model 3 is….anecdotes like that underscore just how Revolutionary the Tesla car is vs old fashioned gas cars. Tesla cars are just smarter, update-able, better, different and so much more fun than any other car you can get. So yeah, the product is incredible. But, but, but, that doesn’t mean that Tesla’s earnings report tomorrow will automatically reflect that trend. 90 days of business is all the report measured and we’ve got 5-10 more years of Tesla revolutionizing the car industry to go. I really have no idea how TSLA will trade after the report tomorrow but I’d likely nibble some more shares if it gets smashed and I’d likely trim a little if it pops.

Q. Hi Cody. I have been watching the FB testimony on Libra. I just have a very stupid question. In most countries creating an new currency (paper, or virtual) by private enterprise or organizations is illegal. Is it legal in US to create an alternate currency? I am just fascinated by this. I thought only Feds would be allowed to print money.

A. From Wikipedia: “A private currency is a currency issued by a private entity, be it an individual, a commercial business, a nonprofit or decentralized common enterprise. It is often contrasted with fiat currency issued by governments or central banks. In many countries, the issuance of private paper currencies and/or the minting of metal coins intended to be used as currency may even be a criminal act such as in the United States (18 U.S. Code § 486).[1] Digital cryptocurrency is sometimes treated differently; for example, this is legal in the United States but illegal in a few countries (mainly in West Asia and North Africa).”

Remember that until the after the Civil War, it was perfectly legal and normal for people to use private currencies: “In the United States, the Free Banking Era lasted between 1837 and 1866, when almost anyone could issue paper money. States, municipalities, private banks, railroad and construction companies, stores, restaurants, churches and individuals printed an estimated 8,000 different types of money by 1860. If an issuer went bankrupt, closed, left town, or otherwise went out of business, the note would be worthless. Such organizations earned the nickname of wildcat banks for a reputation of unreliability; they were often situated in remote, unpopulated locales said to be inhabited more by wildcats than by people. The National Bank Act of 1863 ended the wildcat bank period.”

Despite the risks inherent in private currencies, our nation’s Constitution would seem to guarantee the right to issue one — aren’t we supposed to be a free country? Anyway, at the end, I expect that FB will pay off the Republican Democrat Regime enough to get their Libra currency legalized, despite the fact that the Republic Democrat Regime has laws that would keep you or me from being able to create our own currency.

Q. Hi Cody, You had earlier mentioned that you would invest in bitcoin at $8500 and below. Based on recent price movements what do you think is a good price to invest as it may or may not reach $8500 again ? Thanks!

A. I don’t mean to make it sound like there’s a magic level at $8500 that would make me buy bitcoin. Simply, I own some bitcoin futures in the fund and I own some bitcoin personally and am holding onto both for the long-term. I am not sure bitcoin will ever get back to $8500 again (though I do expect it will again at some point). I wouldn’t go crazy loading up on bitcoin right now, but I think a small bitcoin position is probably a good idea.

Q. Cody. How would you play telecom: VZ and TMUS?

A. A couple weeks ago in the Latest Positions write up, I laid it out like this: VZ Verizon (6) – I’m more a trimmer than a buyer of Verizon lately, and am going to trim another 20% here, so consider this another Trade Alert. I like the dividend and the likely upside to the stock from new potential revenue streams from 5G. Here’s the set up though — it’s likely that Verizon will win the carrier side of The 5G Revolution in the US, as long T-Mobile and Sprint don’t merge. A combined T-Mobile and Sprint just might have the better bandwidth and frequencies for 5G and a better (less expensive) technology pathway to get there. I’ll hold Verizon until we get a ruling on the TMUS/S merger. TMUS T-Mobile ( – I’m holding some TMUS call options that are near-the-money in expectation that this merger is approved in the next few weeks. I’ve been planning to nibble some TMUS common stock and am going to go ahead and do so this week. Consider this a Trade Alert that I’m starting a small TMUS position.

A. No, I don’t think so…QCOM is set up to dominate much of the 5G Revolution chip business regardless of whether Apple makes their own modems or not.

Q. I know you are getting tired of this every week, but gold and silver stocks have gone crazy! I am not asking you what to buy, I am asking you what are they forecasting?

I’m headed out to NYC tonight and unless I do a Trade Alert or two, I probably won’t write much until I get back. Of course, I’ll have a lot of updated analysis and hopefully a new idea or two when I return next week. And finally, here’s a picture of our old and young Great Pyrenees. The cycle of life is apparent in this picture and there is a cycle of the economy/markets that we should be aware of too. 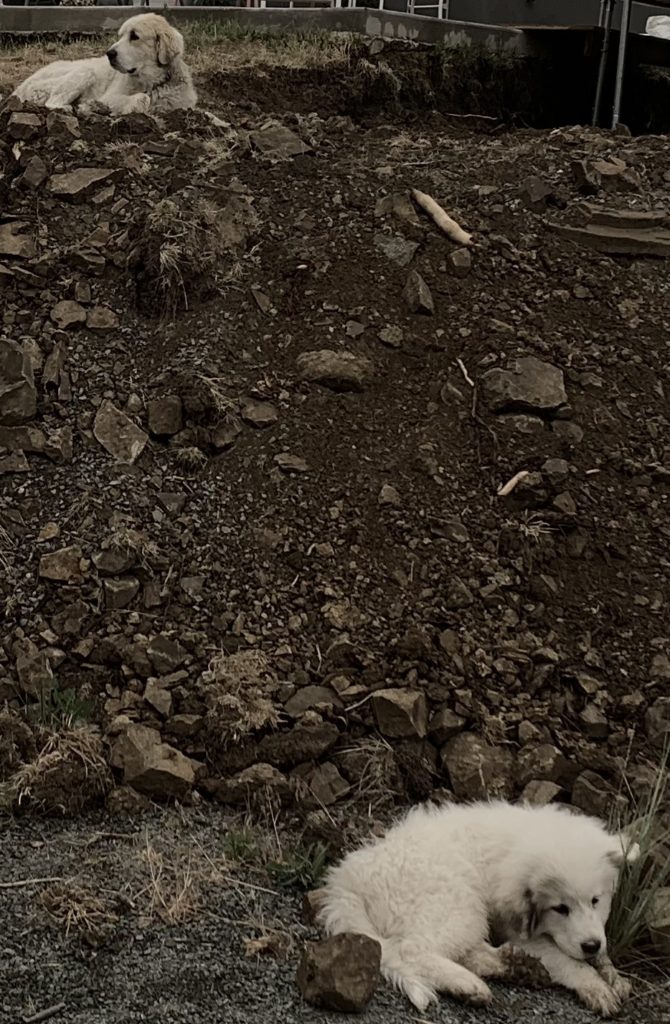 Thanks, everybody! That’s a wrap.