This morning, apparently the “real” yield curve inverted. Not that fake yield curve that inverted a few times already, in which you might have made the mistake of thinking that the 30-year Treasury or the 3-month Treasury might be important. No, apparently, it was only the 10 year and the 2 year that matter as inverted indicators.

And as every single outlet I read today explained to me: “The yield on the 2-year Treasury note topped the 10-year rate, a so-called yield curve inversion that has been a precursor to past recessions.”

Apparently, the algorithms and the news media all have the same playbook. Here’s a sampling of all the recession warnings that popped up on CNBC, NY Times, Marketwatch, etc:

The bond market’s recession warnings are getting louder

Just look at the Google Trends for “recession” in the last week: 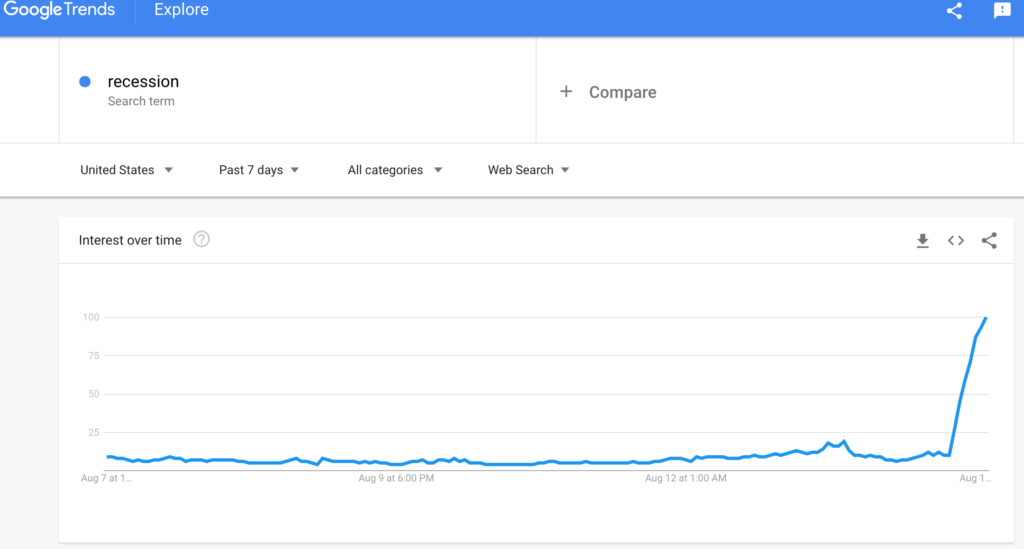 I don’t want to be glib about today’s panicky sell-off or about the very strong possibility that the US could indeed be headed into recession. But I also know that when some random economic indicator gets this much overwhelming focus in both the markets and the media, that people just might be over-reacting right now. The US might indeed be headed towards recession, but then again, it might just be a false flag this time. It’s not that a US recession is fait accompli simply because the 2- and 10-year yields got inverted for a day. Let’s see if it’s still inverted in a week. And even then, it could still be a false recession flag.

That said, I can’t hardly believe how quickly the market is spiking, crashing, spiking, crashing. It’s day-to-day for the last couple weeks, and it’s been a rare occasion of seeing me do some quick trades. And once again today, I am indeed going to do a few little trades here, reversing what I did yesterday when I’d trimmed some longs and shorted some index ETFs and nibbled some more index puts.

I’m nibbling a little bit of AMZN, CSCO, SPLK, UBER. And I’m selling about 1/4 of my index put hedges, locking in some nice trading gains once again. I also covered a little bit of my VHC and HTZ shorts for nice gains.

Easy does it. Even if the algo’s and headlines make it hard.