Here’s the transcript for this week’s Live Q&A Chat.

Q. When looking to build a core position to hold with conviction for many years please describe your thought process. Is intuition a significant part of that?

A. Interesting you should ask that question. I just wrote this in my most recent hedge fund investor update:

“Lately, I’ve been reading a biography of Nikola Tesla, the inventor/scientist/genius which the car company was named after. I’m finding some very interesting lessons and ideas to apply to my approach to investing. In one of the passages, the author outlines how Tesla, “reported another curious phenomenon that is family to many creative people, i.e., that there always came a moment when he was not concentrating but when he knew he had the answer, even though it had not yet materialized. ‘And the wonderful thing is,’ Tesla said, ‘that if I do feel this way, then I know I have really solved the problem and shall get what I am after.’ Practical results generally confirmed this intuition.”

When I think back on my investing career and the major times that I remember feeling something akin to what Tesla is describing having felt with his inventions:

How I turned so bullish, predicting what I called an Echo-Techo Bubble and launched a tech hedge fund back in late 2002 when the markets were putting in a long-term bottom after having crashed 75% from their highs in 2000

And and then how I turned so bearish because of the impending real estate-induced economic/market crash and basically sold everything in 2007 just as the markets were about to crash,

I bring them these examples of because in each of those instances, I felt like then I knew what was coming with my analysis. And more importantly, I bring them up because I expect there is something in my head, that I’m not quite aware of yet, that is an obvious place to catch the next big move.

Back to the markets again, I don’t necessarily expect that the economy and markets will suddenly crash again or anything quite like that. There are trillions of dollars moving every day in this economic world and some of these trends are building to places that are about to become obvious.

Q. Cody, AAPL is at the top of your recently stated trading range of $210-190. Is it time to trim, or do you tentatively believe it might continue rallying along with the rest of the market (per your email of last night)? Trump and Cook just had dinner. Cook apparently told Trump it would unfairly harm AAPL if it were subject to tariffs since its rival Samsung doesn’t import to the US from China and would be at a competitive advantage. Trump said he was impressed by Cook’s argument.

A. I think we have to look past the tariff Trump China Trade War issue that everybody is focusing on with Apple right now. That said, yes, I’d rather trim than buy AAPL right here above $210. Still a core holding of course, as it has been since 2003.

Q. have you dug into ROKU at all? There was seekingalpha article last year when stock was 40. She said stock was going to 100. Now she is saying stock will be 100 billion dollar company, of course with some bumps along the way.

A. I’m not a fan of Roku the product or ROKU the stock. I don’t get why anybody would rather use Roku than simply use an Amazon Firestick or a Google Chromecast, which seem to be much easier to use. I ordered a Roku stick because I thought my old Roku TV must not have the latest Roku apps on it or something, because I couldn’t understand what all the Roku hype is about. The Roku dongle device apps were the same thing as my old Roku TV apps though. Meanwhile the stock trades at 10x next year’s sales estimates, growing at 40% per year with 40% gross margins. Looks wildly expensive to me. I’d rather short ROKU than buy it.

A. I’m a fan of the band Tesla long before I was a fan of the car. Their cover of Signs is classic.  And they’ve got a lot of great originals too, but yea, Love Song with that beautiful acoustic guitar intro and those harmonies in the chorus…it’s awesome.  And speaking of Tesla Love Song, here’s a screenshot of a real conversation my wife had about this a few weeks ago: 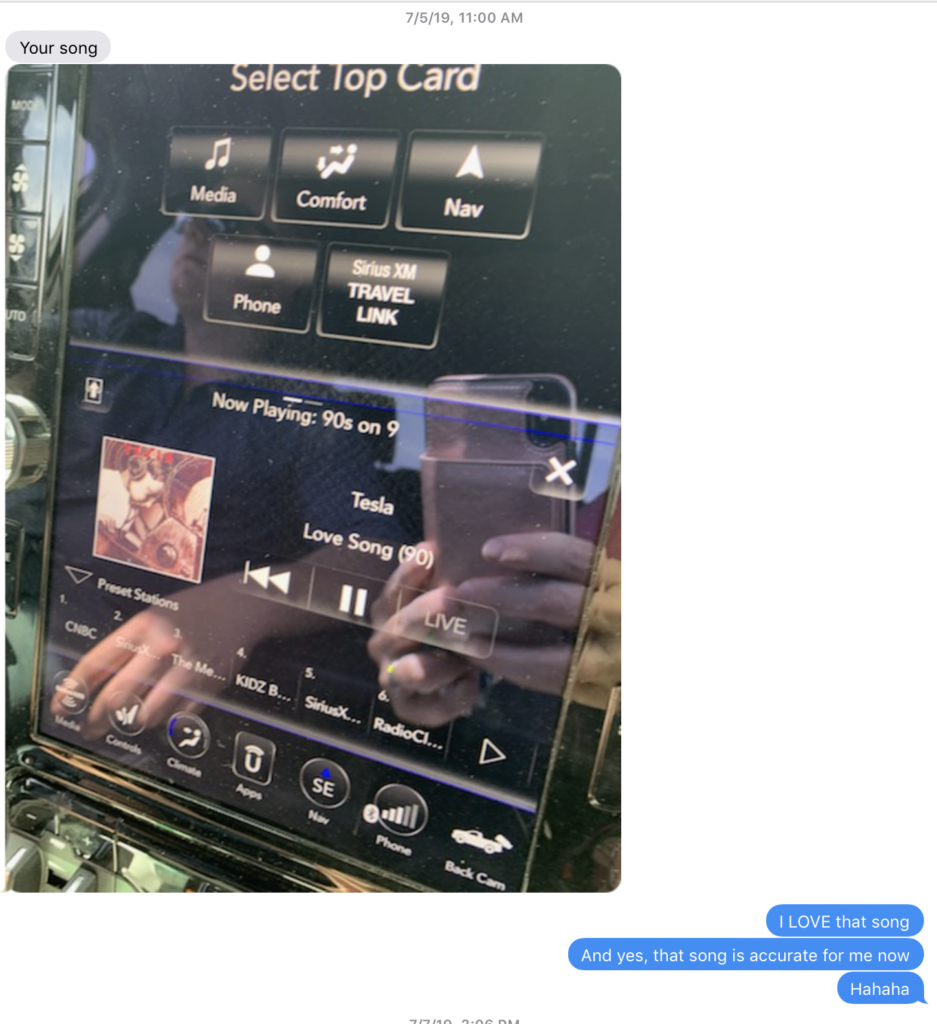 Q. Overall great qtr for me, thanks! One loser is MO. Any current recommendations? Thanks!

A. Thanks and good to hear. The 7% dividend keeps me in it but I have to say, I’m sick of seeing its losses on my P/L.

Q. The $CGC continues to get smoked (heh). In the past you’ve said you might be interested at lower levels. Would that be in the teens, perhaps, or is that overdoing it? Is the space as a whole getting more attractive to you yet?

A. Frankly, if the markets are going to over do it on the downside like they did on the up (high, heh) side in the marijuana stocks, then the teens for $CGC, just another seven bucks doesn’t sound outrageous. But yes, I do think it’s closer to being a buy time in marijuana than it’s been in years. Maybe a toe in the water here and leave yourself plenty of room to add.

A. I’m not a believer of Beyond Meat either. Beyond Meat is the Roku of food. The product ain’t all the differentiated from other more products from well-heeled competitors in the market and the valuation is insane. I’d rather short BYND than buy it.

Q. Cody – any thoughts on Oil….seems to have been beaten up a lot lately

A. Same as always – oil is a secularly declining industry, as are all fossil fuels. Solar is best.

Q. Does the recent news of Bakkt confirming its futures contracts make you any more bullish on Bitcoin, ho hum, or sell the September 23rd launch?

A. Bakkt futures contracts don’t move the needle for bitcoin, but it’s another affirmation of bitcoin’s mainstream-ism.

Q. Good morning, Cody! Would love to have your thoughts on Republic, and specifically if there are any strong(er) clients of theirs you would recommend for us. It’s been a while.

A. I’ll work on that this week. Believe it or not, it was on my calendar for this week to spend some time focusing on Republic again.

Q. Cody: What is your thought on $MSFT ?

A. Great company, fairly valued. Would rather own it than short it. Probably should own it, as it’s not as overowned as the other trillion dollar companies, Apple and Amazon.

A. I’d rather own TSM, which makes the chips for both AMD and XLNX and almost all of their competitors too.

Q. Hi Cody – what are your thoughts on BIDU earnings?

A. Clearly better than the market expected. The quarter-over-quarter gains in revenue were very good to see and could indicate that revenue has reaccelerated. I’d probably suggest trimming some here (in fact, consider this a Trade Alert — I’m trimming 10-15% of our BIDU, which we were buying recently in the ugliness of the recent sell-off.

A. Good gross margins at 60%, 30% growth, 3x next year’s sales estimates. Being a second-hand clothes seller isn’t the most exciting industry in the world, but this sounds like a reasonable play on millennial fashion trends meeting The App Revolution. Real ain’t no Roku of fashion! Haha.

A. It’s usually best to buy a stock when it sells off because an executive left. That said, I’m still in hold mode on PANW til we see the next quarter and how their recent acquisitions are taking hold.

Q. Cody, GE…:still LT bullish view? CEO confidence buys – do you give any credit to this or just noise? Thanks!

Q. Do you think China will keep devaluing the RMB vs USD in the short/medium term, or do you think it’ll rebound? Any investment ideas for either direction? Thanks.

A. I don’t really have a feel for what the Chinese will do with their currency, so I stay away from trading ideas around it.

Q. Could you please comment on this: As with many of the best growth opportunities, the current earnings outlook does not accurately portray Nvidia’s potential. This will be true for a few quarters. It may require sniper-like timing (or a generous trailing stop), but betting on Nvidia and AI will have recoil-like gains when there are clearer skies for semiconductors and hyper growth in the $15 trillion AI economy.

A. I’m a bull on AI and have owned NVDA partly for that reason since it was at $30 a share. But that sounds awfully wildly hyped there.

Q. nflx..now that its way down from its high does that change your view at all?

A. Well, I’d rather be long than short nflx below $300. Would rather own Google though.

Q. Cody. Global economies are slowing down due to trade wars. What do you think is the odds of a recession within next two years in USA?

A. 33% chance of recession in the US in the next two years.

A. I started buying BIDU below $120, I do believe, late May: https://tradingwithcody.com/2019/05/21/trade-alert-china-trade-war-opens-opportunities/ I try to set my lots to sell at the most tax advantage way.

A. Yes, will finish in top 5 MVP voting, if Odell Beckham stays healthy.