Morning all. We did a weekly Q&A in the chat room this morning, even though I didn’t send out a notice to everybody. I’m baaaack from NYC and I’ll have some analysis and ideas from NYC that I’ll be writing up for you this week, so stay tuned.

Q. Do you recommend playing this market more on swing trades as it’s a more volatile period? For instance, we have a week where the market is down 3-5%, then a week like last week where it’s up 3-5%. What do you think the next catalyst to shoot the market higher? Fed lowers interest rates? China deal reached? Right now the tariffs haven’t been felt by the consumer yet,. We will start feeling it over the next few months though. if no deal is reached.

A. Yes, I’ve been sending out Trade Alerts and otherwise guiding you guys towards doing some more active trading around these wild swings in the markets. However, might be time to stop trying to do so now that more and more traders are looking to do so.

Q. Hi Cody, how much do you try to find the balance between trading and your personal life? I start to find out, that it affects my emotions in my family life (especially during those nervous times) and I am wondering, if all that time invested in it is really worth it or better do some other business.

A. Lots of jobs are even more stressful than this investing/trading for a living. It’s hard to keep your emotions from any job out of your personal/family life too. I guess we all struggle with this and admitting that we do is probably a good first step towards dealing with it. Let’s be sure to hug and kiss our loved ones tonight extra hard and tell them how much you love and appreciate them. And then let’s do it again tomorrow too!

A. Yes, consider this a Trade Alert. I’m nibbling a little more UBER here. Might be my last tranche for a while.

Q. Cody, ditto that question. I got rid of awful M. SPLK and especially UBER do not look good.

A. I just nibbled some UBER. Holding SPLK steady for now.

Q. Any thoughts on $CCJ as a play on the Uranium cycle (if it is indeed in the process of bottoming out)?

A. Wait, sorry, for a second there, I thought you just asked me about a Canadian miner stock that runs Uranium mines in Saskatchewan, Canada and Kazakhstan as a way of betting on a hoped-for bottom in the Uranium cycle. Haha. No, I don’t have any thoughts on that stock except that I know I won’t be investing in it. I don’t even like to invest in gold miner stocks because of the added risk that comes with owning a company that depends on a commodity’s price. I’d rather bet on Uranium than any uranium stock if you’re trying to game the uranium cycle.

Q. So a more direct OTC play on price like Uranium Participation Corp (URPTF). Got it! All in! #kidding

A. Yea, um, I’m gonna suggest people avoid URPTF too: “Uranium Participation Corporation operates as an investment holding company. The company invests its assets substantially in uranium oxide in concentrates (U3O. U3O8 is primarily used as a fuel for nuclear power plants. Denison Mines, Inc. operates as the manager of the company. Uranium Participation was founded in 2005 and is headquartered in Toronto, Canada.”

Bad news…Bernice the Great Pyrenees is on the lam again. I’ve got to go get her (in our Tesla Model 3 — she better not be muddy!) because my wife is in Albuquerque at the hospital with Amaris getting her checked up. [I found her and Miel, our older Great Pyrenees, using the GPS collar. They weren’t muddy but I’m not happy about driving them around in a Tesla]: 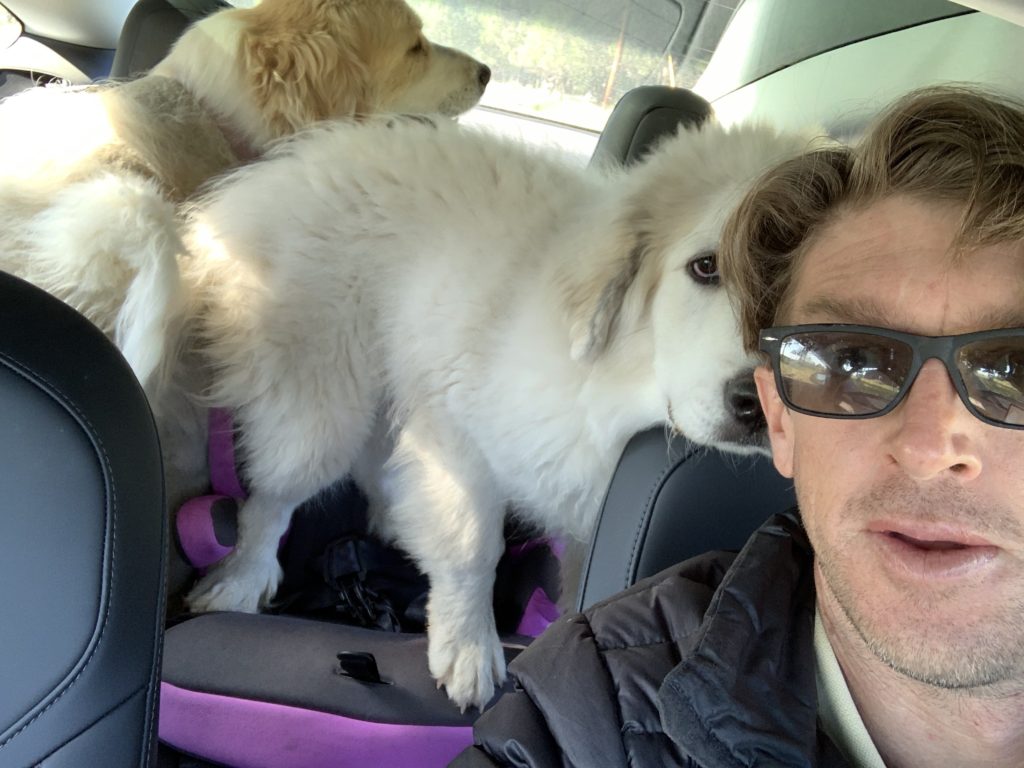 Q. Good morning Cody I hope you had a great time in NY! Model Y, China Gigafactory and now Tesla insurance 2020 is going to be amazing for Tesla, so it seems. On the other hand, the sentiment at the moment is positive for Tesla and solar city looks like trouble. The rules is if you want to buy you actually have to sell. What do you think buy a little, sell a little or keep it all?

A. I have a few ways to answer this question. 1) Sometimes it’s best not to overthink it. 2) If you’re asking if you should trim some, it might mean you’ve got too much exposure for your own personal risk/reward tolerance, so maybe take your own advice and trim some. 3) I agree 2020 could be amazing for Tesla…if they can just keep selling enough Model 3s to get us there in one piece!

A. Yes, here’s a good chart that shows Tesla’s market share growth in the Netherlands: 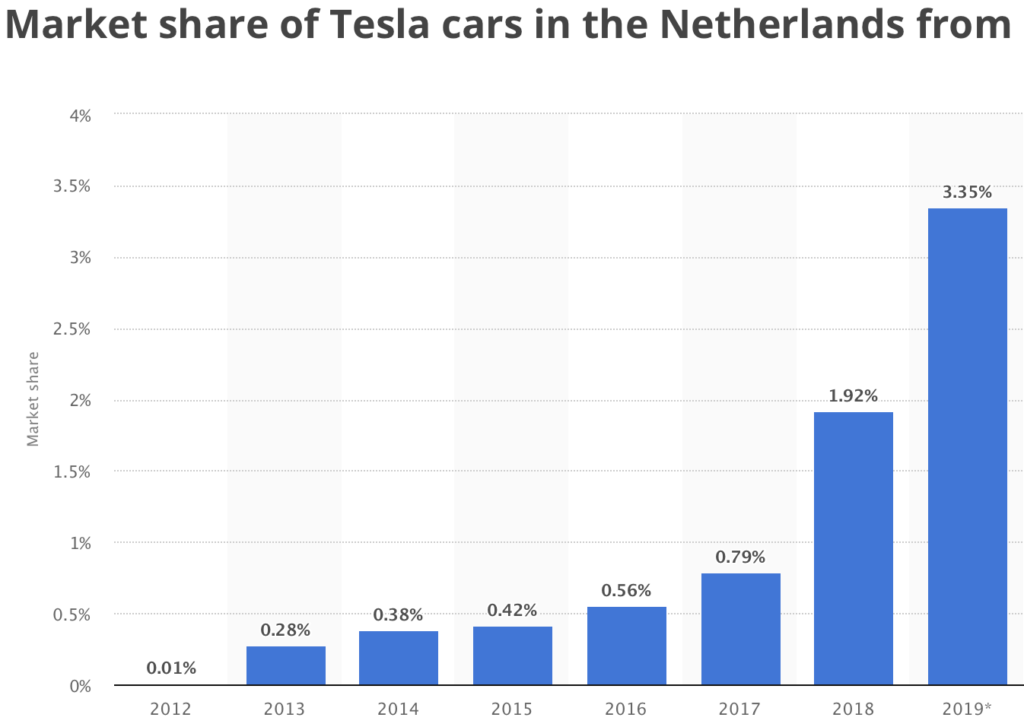 A. The stock was already very “cheap” on most metrics and it’s probably even less expensive now after that strong report and guidance even though the stock is up 10% since the report. That said, the stock continues to trade mostly in parallel with VMW, which is owns a big chunk of. I am a bit cooled on DELL because of the complicated structure of its equity and balance sheet, but am holding on to some of it for now.

Q. Cody – QCOM holding up well despite the market volatility and China uncertainty. You think its ready to surge if market improves and some positive news out of China ?

A. Hmm, QCOM is down 3.5% today as I type, more than the markets and more than the semiconductor index. I have no idea if it’s about to surge though, despite the news. There’s still litigation risk around this stock. But it’s so cheap, nice dividend and is about to make a bunch of money by leading the technology of 5G.

Q. Are you able to make any sense of the dramatic rise in payments/trades shown for Stellar since early summer?  This would seem positive on the surface but the price has gone in the opposite direction.

A. The problem with Stellar, as I think we’ve hit on before in your questions in the chat — is that even if it becomes widely adopted, that doesn’t mean Stellar will be a good store of value and/or a good currency.

Q. Cody, thoughts on Boeing? 737 Max issue will be resolved by year-end. Seems like it could run a lot higher after this.

A. Then again, I’d be worried that we could get a sell-the-news reaction if/when the 737 Max issue gets resolved.

A Framework For Successful Revolution Investing And Avoiding Black Swans
Trade Alert: Insights, answers and scaling into more of one tech stock
Trade Alert: Betting on Peanuts
Trade Alert: Taking a tranche of profits on JRJC puts PLUS Analysis on Apple, The Fed and the Alibab...
Trade Alert: INTU (and full report on Gold vs Oil for the next five years)