My old friend Vitality Katsenelson is a very smart money manager and value investor who thought my Trading With Cody subscribers might enjoy seeing his analysis on The EV Revolution (Vitaliy has been a long, long time subscriber). Vitaliy is the guy who puts on the value investment ideas conference in Vail where I presented Tesla to a room full of “value investors” who were bearish and/or short TSLA. Vitaliy and his 18-year old son ended up ordering a Tesla a few weeks later. And they, of course, are in love with it. Vitaliy has a very analytical mind and when it gets going on a topic, he’ll really dig deep — as you’ll see below in the first part of his Tesla analysis. I’ll share the rest in coming weeks as he publishes it.

“The test of a first-rate intelligence is the ability to hold two opposed ideas in mind at the same time and still retain the ability to function.”
– F. Scott Fitzgerald

You really don’t know the company until you buy the stock. It has happened to me a few times. We did hundreds of hours of research, bought a stock, and that act of buying activated new senses. I started seeing new angles. Something similar happened to me with Tesla, except I didn’t buy the stock, I bought a car.

In late June 2019, I bought a Tesla Model 3. Most people would just enjoy driving such a car. Not me – I wrote about it for two or three hours a day (usually early in the morning). During evenings and on weekends I read anything I could find tangentially related to the EV industry. I discussed EVs with a lot of my friends, who helped me to shape and polish my thinking.

Why did I spend so much time on this? I really wanted to understand the impact EVs will have on everything, from a drop in the demand for oil, to an increase in the demand for other energy sources, to the transformation of geopolitics, to changes in the trucking industry and the implications for railroads, to … the list goes on and will continue to grow.

There was also an element of natural curiosity. I learned a lot, and the process of learning brings incredible satisfaction.

There were also offensive and defensive business reasons: I am always looking for new investments, and a lot of opportunities will be created by the transition to EVs. On the other hand, EV disruption will claim its victims – stocks to avoid. And finally, I was able to develop several mental (thinking) models, which I will be able to apply to other investments.

I knew this article was going to be long when I sat down to write it. I did not realize that it would span 37 pages. There is no way most of my readers will read an article this long, so I’ll give you a few options. You can read part one below; but if you want to read the other parts, click here and parts 2 through 11 will be emailed to you once per weekday (you get weekends off to catch up on my other articles). And if you’re a better listener than reader, check out my podcast, where my articles are read by a professional narrator. The analysis will be released a 2-part episode in the upcoming weeks.

Part 1: A Tsunami Is Coming at the Auto Industry
This article is going to raise more questions than it will answer. It will equally frustrate Tesla bulls and bears. I was thinking a lot about F. Scott Fitzgerald’s quote about first-rate intelligence as I juggled opposing frameworks and conclusions.

My history with Tesla goes back to 2015. I put a deposit down on a Model 3 the day Model 3 was announced. I patiently waited for two years, but when I went to buy a car, my local Tesla store did not have any for me to test-drive, the four-wheel-drive version was not available, and the $35,000 car I was originally promised was suddenly being marketed by Tesla as a luxury BMW competitor and priced as such.

At that point, my $1,000 deposit looked like a two-year interest-free loan to Tesla, and I asked for my money back. As I later found out, I was not the only one who felt that way, as Tesla’s 455,000-order backlog, which at the 2018 production rate should have lasted years, disappeared very quickly. Six months later, I was bombarded by emails from Tesla telling me that I didn’t have to wait to buy a new car.

Tesla released the four-wheel-drive option, lowered and simplified its prices on the Model 3, and increased the driving range to 310 miles. By this time, my local Tesla store had plenty of Model 3s for me to test-drive. And drive I did. I had driven the Model S before, and I was pleasantly surprised to find that, despite not having air suspension, the Model 3 was even more pleasant to drive.

Finally, the price started to make sense. The four-wheel-drive version, with a 310-mile driving range and a premium interior, had a price out the door of $51,000; with $9,000 of federal and Colorado tax credits, the net cost to me was around $42,000. Yes, dear reader, you paid for almost a quarter of my car.

My car came with two keys that look just like credit cards. I have not used them at all. The car is connected to the Tesla app on my iPhone through the 4G network and Bluetooth. I can completely control the car from my iPhone app. If it is hot or cold outside, I can turn on the AC or heater from my phone. I can see where my car is at any time.

When I approach my Tesla, I don’t have to do anything (my phone is in my pocket): The car magically opens. When I sit down, I don’t have to push a start button; I just push the lever to D or R (drive or reverse) and start driving. Because no combustion is happening in the electric engine, my car makes no noise when I drive. When I am done, I put the lever on P (park), get out of the car, and it automatically locks.

Tesla made very radical interior design choices. Aside from buttons to open and close doors and windows, there are no physical buttons inside the car; all buttons and other controls are virtually placed on a giant tablet. I can control the stiffness of the steering wheel, turn the regenerative braking on and off, or set the quickness of acceleration as if choosing settings in a video game.

In fact, the car can also turn into a video game. The Model 3 comes with a dozen video games that you can play when the car is parked or waiting for a Supercharger to fill it up. The games are controlled by the real controls of the car. There is a driving video game that my daughters love where you use Tesla’s real steering wheel and brake to drive a virtual car.

The Model 3 is really a computer, an iPad on wheels. The iPad-looking tablet and minimalistic design, which sits right in the middle of the front console, at first seemed a bit odd, but it felt natural once I was in the driver’s seat.

The software interface of the tablet seemed very Apple-like; it was not designed by engineers for engineers (something Microsoft would do) but by human beings for human beings. The alarm clock radio controls of my wife’s Honda Odyssey or my German SUV (now my wife’s car) now feel a bit like dumb phones versus smartphones (an important theme of this article).

When you buy a traditional car, what you get on the day of purchase is what you get to use for the rest of the car’s life. The Model 3, however, improves every month or so with software updates. These aren’t just cosmetic user-interface changes to the display – after one of those updates, Model 3 owners woke up and discovered that their rear seats were heatable. The hardware was already there; the software update activated it. Tesla constantly releases new features, from arcade games to upgrades to the security system, through software updates.

I’ve owned the car for a bit over two months, and so far it is the best car I’ve ever had. Just as with a slight benefit of hindsight, it is easy to see how smartphones (whether or not made by Apple) are the future of mobile phones, I can see that electric cars are a tsunami that is coming straight toward the automotive and transportation industries and their supply chains; it’s just hard to say yet when it will land onshore and wipe out (replace) the internal combustion engine (ICE) car. But it’s clearly a question of when, not if.

Electric is the car of the future; that’s as clear to me as rain. 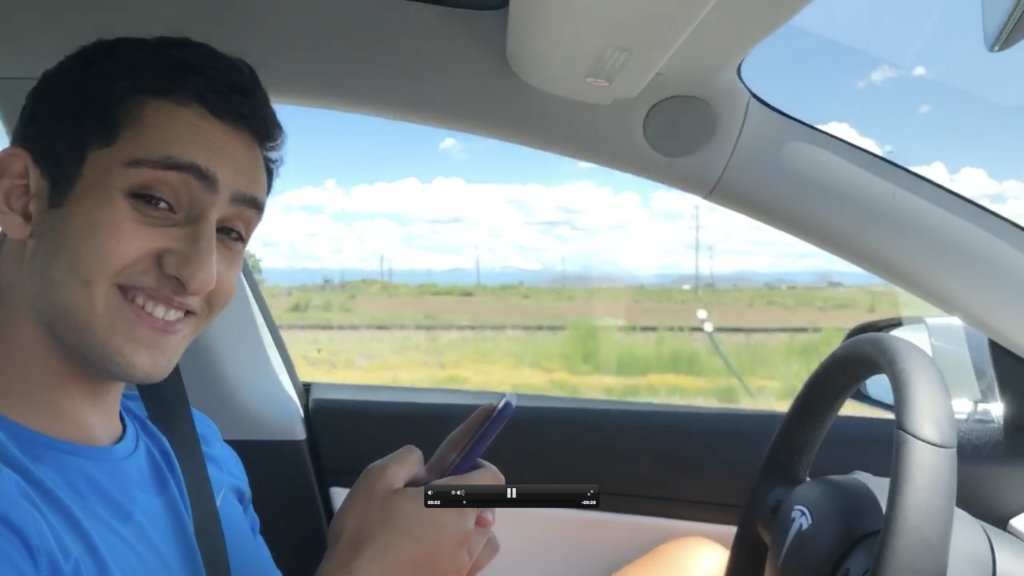 (Pic is from the video Vitality sent me of his son enjoying the Tesla Model 3 on its first long drive a few days after they got it. And yes, he puts his hands back on the wheel just a few seconds after this screenshot, don’t worry.)

That said, I have added a lot of...
NYC trip, No chat this week
Celebrities, the economy and what makes the world go round
Elad Ryba joins TradingWithCody - Proud to announce our new Chief Moderator & Guide
Subscriber Chat Room Archive (October 24th – October 30th)