“Nicola (sic) Tesla promises us communication with our terrestrial neighbors. How, when and where? remain to be seen.” – Richmond Times 1901 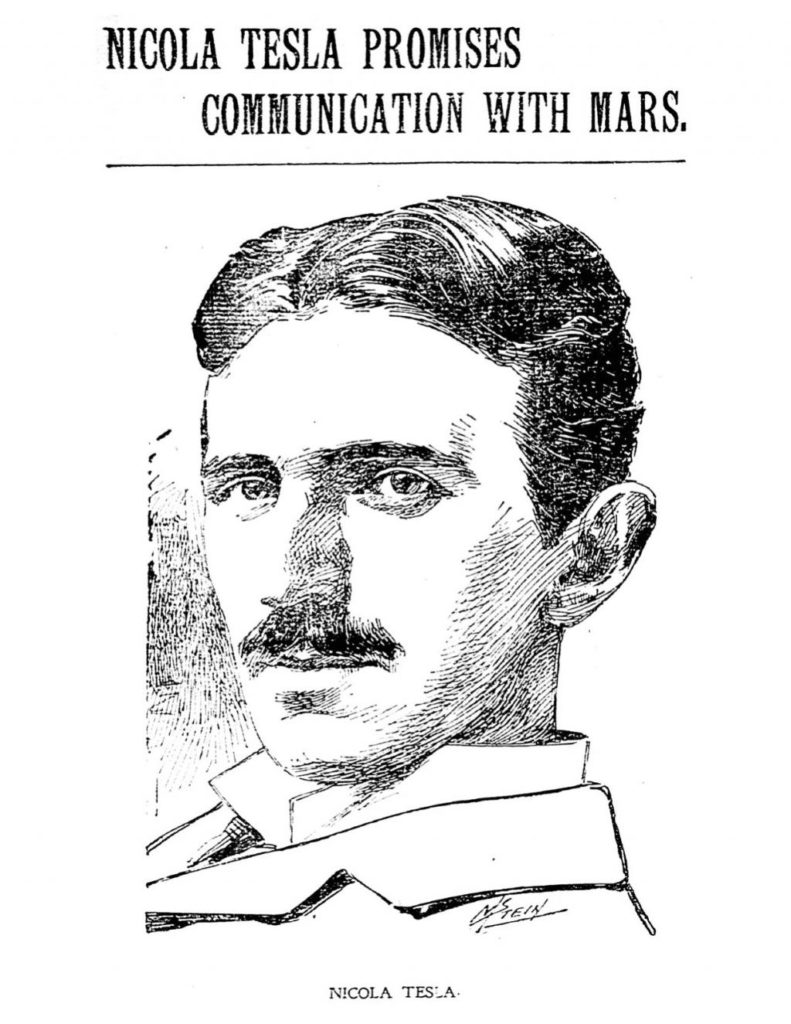 The Space Revolution — certainly the private Space Revolution — is in the top of the first inning, maybe like three pitches in. That’s why there are so few pure(ish) plays in the public stock markets for us to invest in right now. That said, I do think I’ve found at least a few space-related stocks that we should probably put into a basket to get in front of what I think will eventually become a full-blown Space Stock Bubble. But I get ahead of myself. Let’s walk through The Space Investing playbook.

Let’s put some of that in perspective, shall we? Venture capitalists in the US put almost $100 billion per year to work. Globally, it’s probably 2-3x that amount, so let’s say there’s at least a quarter trillion dollars per year put to work from venture capitalists. There’s also another $100 billion or so that will be raised by crowdfunding and smaller private investments out there. So that’s a lot of money. 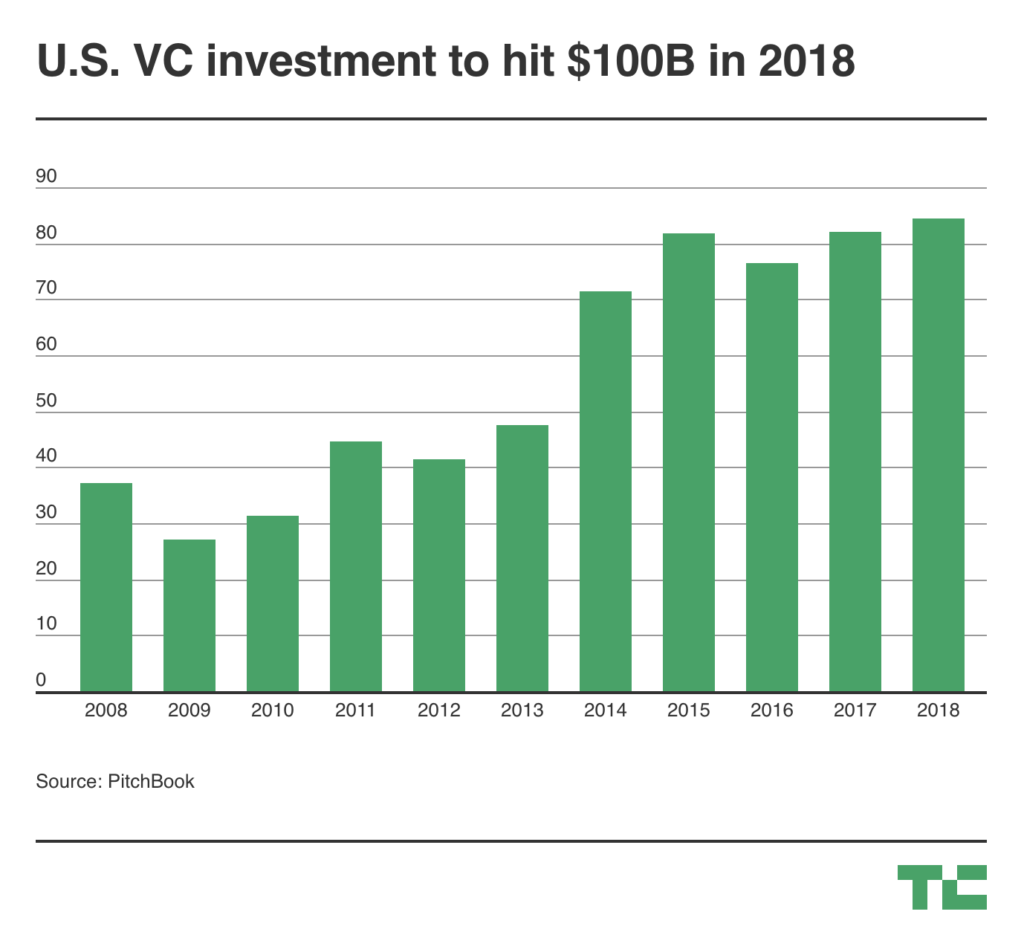 But so far, space-related investments are a tiny fraction, maybe accounting for 1% at $3 billion-ish of the total in 2018.

The space industry itself is already almost a half a trillion dollar a year industry and it’s been growing slowly for years. 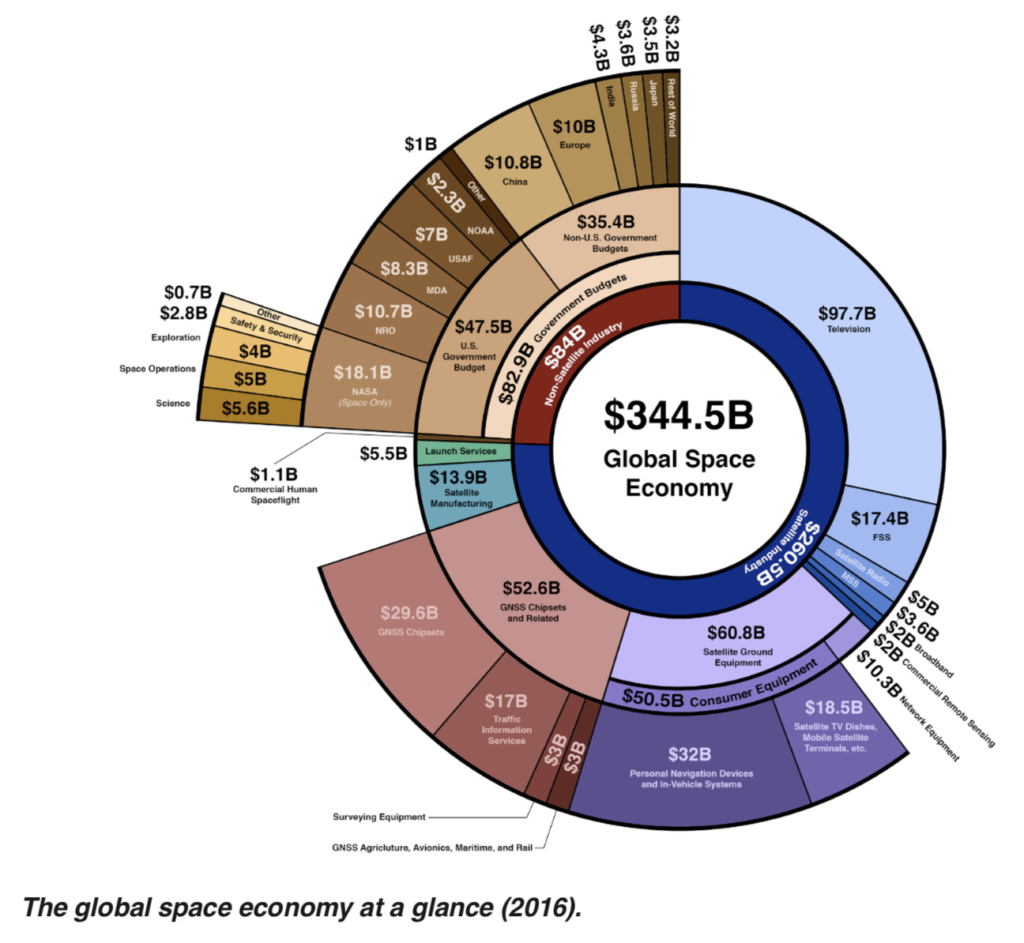 Just now here in 2019 and into the early 2020s, that revenue is likely to take off, as everything is coming together for exponential growth: The world is flush with cash looking for exciting new places to invest just as the cost of rockets and launches are collapsing but getting more advanced, giving rise to exponential growth in the demand for the ability to send satellites, people and other stuff into space. Governments around the world will likely increase investments in space as they try to leverage the halo effect that space travel always brings (read: Space is good propaganda for governments).

And we’ve all seen how new applications, new ideas, new concepts, new possibilities for humankind always arise when costs drop/technology advances exponentially. I have a lot of ideas about what we might do to make money in space, but I know that there will be so many incredible new ideas to make money in space as costs collapse and technologies advance that I feel silly even pondering it while we’re still in the third pitch of the first inning here.

One of the lessons I’ve learned over the years is to never doubt the ability to for the Revolutionary markets we find to truly grow into meaningful industries and eventually bubble. I was predicting a Cloud Revolution turning into a Cloud Bubble six or seven years ago. For all the patience I have exhibited over the years in holding so many our investments for the huge gains we’ve made over the long-term, there are so many names and Revolutions that I lost patience for. The Robotics Revolution. The Bitcoin Revolution. The Social Media Revolution. Many of our biggest winners come from having gotten in front of those Revolutions early on and many of the names that I lost patience on eventually did become 5-10 baggers or more like the ones we held onto as those Revolutions turned into Bubbles that we are now living in.

So here are a few names that have at least some minor exposure to the Space Industry and might benefit from the Space Bubble that’s about to blow in coming years:

Boeing (BA), Lockheed Martin (LMT) Airbus (EADSY) Northrop Grumman (NOC). The only one of these stocks that I like is Boeing and I already own it on account of its duopolistic airplane-making status.

There are satellite stocks like Maxar (MAXR), Iridium Communications (IRDM) Intelsat (I), but I think the world is poised to pass them and the old satellite technologies they were built on right by.

A couple purer plays would include:

Aerojet Rocketdyne (AJRD) which has been making rockets to send stuff to space since before and including the Apollo Missions. The company has been acquired, spun off, merged and so on for decades, but it’s probably poised to benefit from the coming Space Bubble. The company might have to acquire some startups to stay relevant but with a $12 billion market cap and a history of M&A&Spinoffs, I think it might do so.

And Social Capital Hedosophia Holdings (IPOA) which is basically doing a reverse merger with Richard Branson’s Virgin Galactic, which has predicted space tourism flights will begin within a year and profitability by 2021 (I wouldn’t hold my breath about that, but “profitability” that early on is not important if the Space Revolution is about to start getting all Space Stock Bubbly in the next few years.

There’s even a tiny little space ETF with the brilliant symbol of UFO but it’s spread itself way to thinly in some of the existing names above including some that are definitely not poised to benefit from The Space Revolution.

So here’s what I’m doing. I’ve already invested a little bit of my hedge fund’s capital into what is by far the leading Space Revolution company, Elon Musk’s SpaceX in a private transaction. I’ve also put a smaller amount of capital into Relativity Space, which is in a much earlier stage of building their rockets (they’re using the world’s largest 3D printers to do so) and capital raising (they’re valued about 1/100th of what SpaceX is valued at right now). But I’m also going to put a tiny bit of capital in two of the space-related names above, AJRD and IPO. I like the fact that I can sell these two publicly-traded stocks at any time but I don’t like their respective space business models nearly as much as some of the private space companies out there.

My expectation is that it might take a year or two or even three before the Space Bubble really heats up, but I also know that stock markets tend to bubble faster and higher than than most anybody expects is possible when there’s a real burgeoning Revolution like this. The fact that there are so few space-related names just as the space industry is about to take off means that any growing interest in The Space Revolution from investors would of course move these smaller space-related names up in a hurry and in a big way. Don’t be greedy though, we’re way too early to feel like you’ve got to rush in and get a ton of Space Revolution Exposure. I’m simply going to try to put maybe 1-2% of our capital into the best two space stocks we can find right now in a basket to hold onto for a couple years at least. If things go awry with either company, we can always get right back out of these names. More likely, I think we can hold these and buy some of the other Space IPOs that will be coming out in the next 2-3 years.

“Throughout space there is energy. Is this energy static or kinetic! If static our hopes are in vain; if kinetic — and this we know it is, for certain — then it is a mere question of time when men will succeed in attaching their machinery to the very wheelwork of nature.” – Nikola Tesla 1890s

I'm buying back a small fraction of the...
You all know these two and perhaps a trade here is setting up...
Small trade, just getting a toe in the water
Trade Alert: How I'm trading Snapchat
A few little tweaks to the portfolio (and don't forget to meet me for today's chat)