After noting in yesterday’s analysis that “as an investor, I wonder when the next time we’ll see a stock like Amazon as the butt of all jokes just as its putting in a generational bottom. I suppose Tesla was there when I was at that Vail hedge fund ideas conference where people openly laughed at my TSLA pick,” I went back and looked at the spreadsheet of all the stock picks from the Vail hedge fund ideas conference where I presented Tesla TSLA as my favorite long idea. TSLA was at $220 at the time and when most of the money managers were so wildly bearish on Tesla, I took that as another bullish sign, quoting Warren Buffett to them: “You [can] pay a very high price in the stock market for a consensus.”

With TSLA up more than 60% since my presentation, it’s up nearly 3x more than any other idea presented at the conference and up more than 10x the average performance of the ideas presented there. The S&P 500 is up about 7% over the same time frame, by the way. 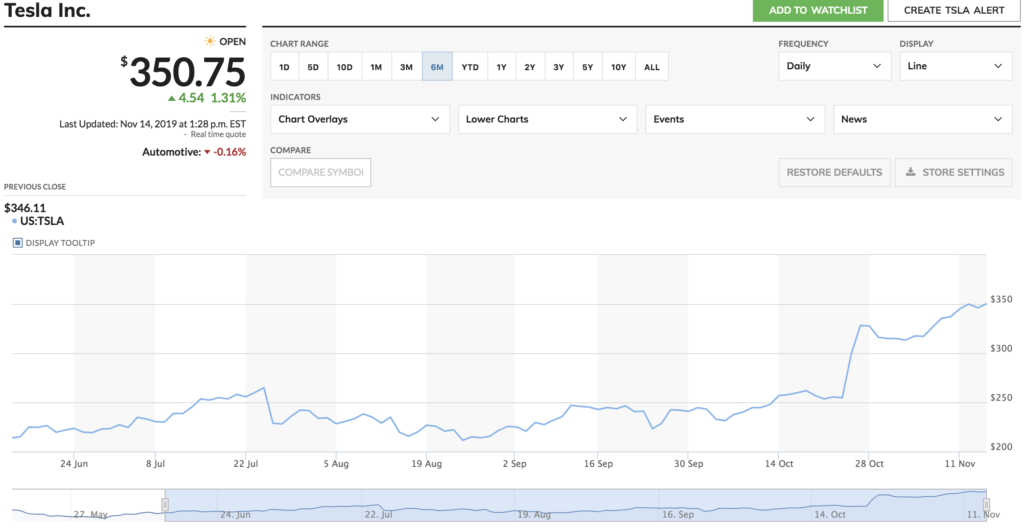 Rather than doing a victory dance (after all, Tesla is still a high risk stock as they still have to keep growing and executing to keep this stock from collapsing), I think it’s time to do some trimming now. I’m going to trim 10% or a little more of my TSLA here and lock in some of these profits.

To look back for some more context, here’s what I’d written about the Vail trip.

I’m back from Vail and am headfirst into catching up on emails, homework and loose ends.  I was in Vail for an “ideas conference” where a bunch of hedge fund/money managers spend three days giving presentations about their best investment ideas. We couldn’t make it logistically work out for me to give my TSLA long idea presentation in the parking lot around my Model 3 as planned, so I got my points across with a 30 minute presentation and 15 minute Q&A. As I’d been warned, the crowd of 35 hedge fund/money managers there were largely bearish and/or short and/or dismissive of the idea of investing in TSLA. At the end of the presentation, I asked the attendees to raise their hands if they were long TSLA. No hands went up. When I asked TSLA shorts to raise their hands, 7-10 of the attendees did so.

During my presentation, I talked about how you can buy a new Tesla, a fricking electric spaceship computer on wheels for less than $40,000, which makes it by far the best car for the masses. And how the company has positive gross margins on their electric vehicles while every other car maker has negative gross margins on them. And how I have no doubt, from having spent years as an anchor on cable news channels and having written for every major financial publication over the years, that there is indeed a coordinated effort from big oil and car companies to take down Tesla with propaganda and misinformation. And I pointed out that if Tesla fails to sell enough cars this year, the stock could crash from these levels, but that the asymmetric risk/reward scenario here looks terribly attractive to me.

Almost every question I got was slanted/biased bearish. I certainly listened to and respected the people at the ideas conference, many of whom are clearly brilliant people and gave compelling presentations. But there was undoubtedly a consensus of TSLA bears/shorts in that room. That’s not necessarily a bad thing, of course, and one of the guys quoted Warren Buffett to me after my presentation when I’d noted the consensus, “You [can] pay a very high price in the stock market for a cheery consensus.”

The 17-year old son of the host of the conference sat in on my presentation and asked me the best question I got — “How can you think that you’re going to be right about TSLA when all these smart guys in the room think the opposite?” I told him that it’s not easy being an independent thinker and having the guts to believe in your own analysis. And frankly, if you think about it, the only way to outperform the people in that room is to believe in your own analysis and to do things differently than all of them. Clearly, there’s risk in TSLA. But there’s also tremendous potential upside.

That upside is mostly based upon the fact that the company is now selling by far the best product to a mass market. And when that starts happening, it’s usually a good time to invest in that stock.

Guess what — I will tell you that more than one of the attendees at my Tesla presentation are now long TSLA stock. And that at least one other is now the proud owner of a Model 3 that he ordered over the weekend.