Q. Do you see interest rate spike within year timeframe?

A. I doubt it actually. With negative interest rates and the race to devalue all fiat currencies by governments around the world, I think the pull on interest rates might be downward for US rates over the next year.

Q. Things seem to be feeling very complacent these days. Have you thought about doing another of your who’s more bullish/bearish surveys?

A. Let’s do it: “Who’s more scared right now, the bulls or the bears?” Please place your vote by clicking here. 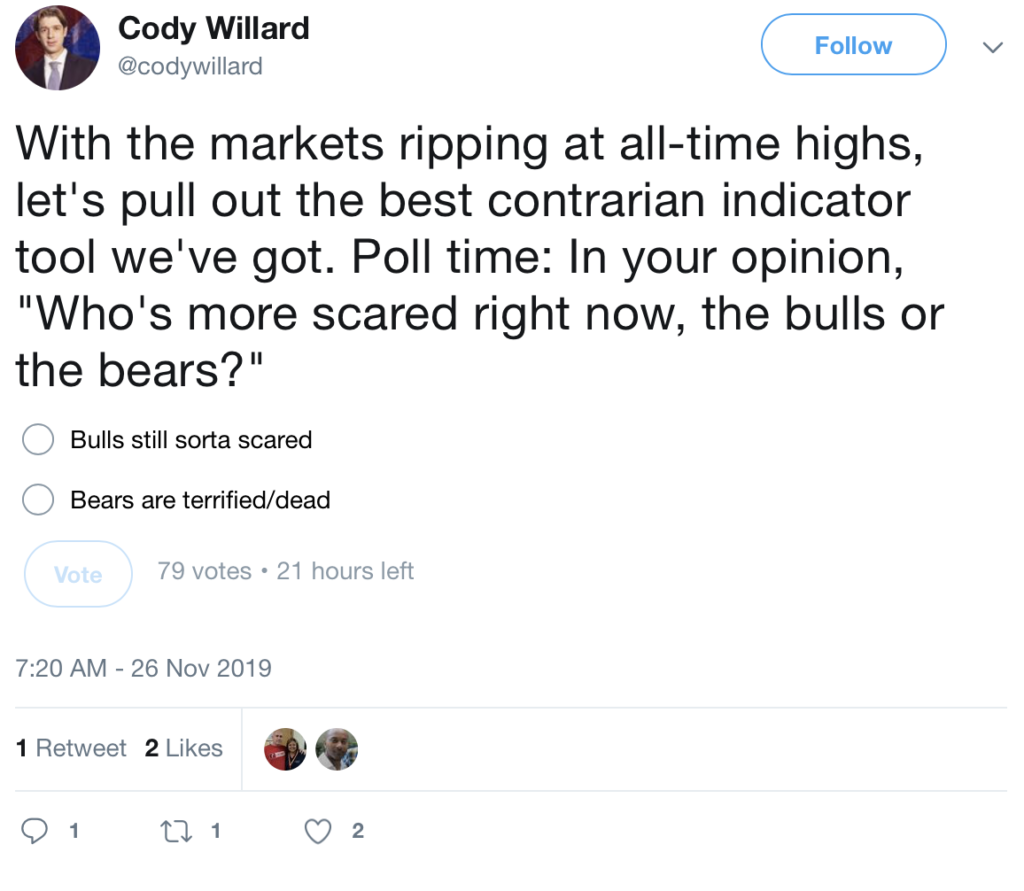 Q. You mentioned before that you thought the economy could be starting to accelerate, Why ? And what does that mean for our markets in 2020 ?

A. How many CEOs, entrepreneurs and other business people in the US have spent the last year or so waiting for the Trade War to resolve itself? How many billions (trillions?) of dollars have been sidelined in the US as businesses and investors thought the economy was sure to slow and the stock market to fall as the Trade War drags on? With the markets at all-time highs and the economy/employment still pretty strong and growing, all these businesses and investors are looking around and going, “Well, maybe we should go ahead and build that factory or otherwise invest in some of these things we’ve had on pause.” I don’t know if the stock markets will put on another 10-15% or more next year, but if the economy accelerates, it’s likely the market keeps in rally mode for most of the year too.

Q. Ha ha, Cramer, a TSLA bear, is buying a Tesla. His excuse is it is his wife’s decision. I think he said a model X.. Stop resisting, and step up to the future of automobiles. I bet after Cramer drives one, he would become a TSLA bull.

A. Yea, I could hardly believe that too. I’d almost mentioned to Jim in an email back and forth a few months ago that he should reconsider his stance on TSLA. But we weren’t talking about Tesla in the email so I didn’t. Wish I had now. Here’s a tweet from Jim about Tesla yesterday: “Jim Cramer @jimcramer Memo to Tesla owners–you want me to say it will go to $400; i Drove in a new one this weekend, how about $ 4450500 making me high man? Now shut the heck up — i am now the most bullish person on Wall Street. How’s that?”

Q. Are you thinking of nibbling more Tesla after Cybertruck sales (200k+) and price still down $30 / share from the peak?

A. Hmm, it’s a pretty big position already, but maybe.

Q. Cody, since you own Model3 would you mind sharing how much range do you “lose” if the car stays still on your drive way for any given time period, say 12 or 24 hrs? Thanks!

A. Depends on what features you have turned on inside the software and app. You might lose 0-1 miles in a given day if you turn off some of the options or you might lose 2-4 miles per day if you don’t.

Q. Hey Cody. I’ve read that electric cars and solar panels require quite a bit of silver which could push up silver prices. Does that sound reasonable to you?

A. Not really. If I had a silver penny for every time someone explained to me that the industrial uses of silver are going to drive the price of silver higher, I’d have a little bit of money because silver’s never really gone much higher since all these people have been telling me that over the last decade or so. I like gold better than silver, but I down own both (more gold than silver). Now watch silver finally take off on a ten year spike rally as industrial demand for it finally exceeds supply — since I just dismissed that idea.

Q. Comments on Ford Mustang Mach E vs. Tesla? Does Tesla still have the “wide moat” vs. Tesla?

A. I think that Ford will NOT have the Mach E in production for mass delivery for another 4-5 years at least. Ford will also lose money on every electric car they make with negative gross margins for longer than that while Tesla will be increasing its gross margins to over 30% if all goes well over the same time frame. Yes, Tesla’ moat is wide and probably still growing.

Q. Any thoughts on the growth of esports? Who will benefit the most?

A. I keep going back and doing new analysis on esports companies like EA and TTWO and wanting to buy them. But looking top down on their business models, I don’t see how they make the transition from $70 per game plus nickel/diming their customers to death with loot boxes and player upgrades to a world where you subscribe to a gaming service for one set amount per month for unlimited play.

Q. Bitcoin has dropped to buying range you had mentioned earlier. What is your take on it with current price and market situation. Would you buy for your hedge fund or personal investments?

A. I’m probably going to nibble some bitcoin futures soon, but keeping it small.

Q. Cody…NOK continues to drop. Have you completed any research on whether this might be a good spec stock for us? I understand the largest 5G auction yet will be in mid-December. Is NOK going to be one of the bidders? Just curious if this auction might spike NOK shares.

A. No, it will be the carriers like T-Mobile and Verizon and AT&T that will buy the spectrum. Nokia will sell the carriers equipment that will use the spectrum that each respective carrier owns to help run their 5G networks. I do think NOK looks interesting at these levels.

Q. Morning Cody! What are your thoughts on DDOG?

A. Looks like a good company, growing quickly at over 40% topline this year, but not profitable and not expected to be next year either. At 22x next year’s sales estimates, the stock is priced for perfection. I’d rather own WORK which has the same market cap as DDOG but is probably growing even faster and trades at 15x next year’s sales.

Q. How would you rate UBER, WORK, DIS, and PANW now?

A. PANW didn’t thrill anybody with their guidance despite a strong last 90 days of business. I’m torn on it but holding it steady for now at least. CGC is probably my favorite pot stock. I don’t know INMD well enough nor have I talked to doctors who use their products to have any idea about that stock.

Q. Not to jinx Disney, but I am going to jinx Disney. Gotta think they are one of the best safe stocks out there with great growth potential. I have Disney+ and content is blah for a 47 year old male but my kids love it and what new parent from now until forever will not spend $6 a month for all that content????

Q. Cramer also wrote an article yesterday, that UBER is now good after hating that for quite a while…

A. Gotta love the flexibility!

Q. Cody: practical question: say one started buying shares of company X @$40 per share (just to pick up a number), then it got cheaper and one buys second 1/3 tranche @30, then last 1/3rd @20, which gives average purchase price of $30 per share. At this point it is full position. Then say share price increase back to $37 – almost doubles from $20, now ones own some more then a “full position”. Would you trim at this point considering that you still in red for your first tranche? Thank you.

A. Sometimes, yes, sometimes no. It’s more of an art than a set scientific rule book when it comes to managing risk, building a portfolio, looking out over the next 10,000 days, not the next 100 days, etc.

Q. You coming around to AMD at all? Gotta put Lisa Su up there with the best CEO’s around, no?

A. I don’t think AMD is doomed or anything. But boy is it crowded right now in that stock, IMHO.

Sold news, spiked emotions and Deep Thought of the Day
Scared yet? Should you be?
Space Investing Zoom Conference Call
Back in the saddle
The 100 Most Important Tech Stocks on the Planet (With update)