DISRUPT YOUR OWN FUTURE

“Master disruption to own your future” from Pontus Siren at Innosight was the title of one of the most fascinating presentations that I sat in on at SALT Abu Dhabi. The talk was all about how you have to see disruption before the data tells you it’s happening if you want to survive. He was mostly talking about businesses, but it totally applies to investors too. And in our case, it applies to us as investors in companies that it applies to. You might say it’s so nice, it applies twice (sorry).

Here’s the most important slide from his presentation, which Pontus was kind enough to send me: 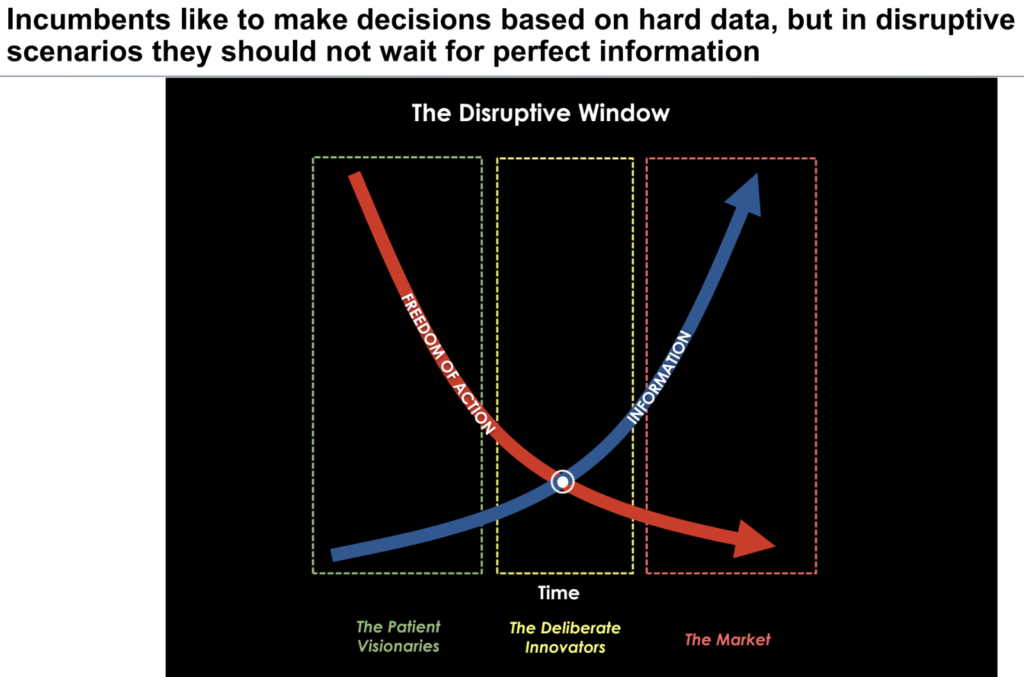 You could replace the word “Incumbent” there with “Investor.” We have the most freedom to act with our money before the market has already priced in the perfect information of a disruptive force.

As Revolutionary investors, we want to get in front of the trends that will change the world before most people can see them. That’s another way of saying that I like to invest in “disruptive scenarios before we have perfect information”.

In the case of enterprises, by the time everybody sees that a Revolutionary trend, say smartphones or streaming TV, is taking over, it’s usually too late for the incumbent to do anything about it. Pontus highlighted past examples of Kodak, Blockbuster and Nokia, but talked about a present example with the incumbent car companies. That is, every car company has finally accepted, here in 2019, that electrification is the future. EV vehicles are cleaner, safer, smarter, faster, better as the hard data clearly shows now. But it was years ago, when Tesla started trying to perfect EV cars and motors that was when the incumbent car companies had to prepare for the EV future.

Back in June at Vail when I presented TSLA as my long idea at a hedge fund ideas conference, I mentioned that I thought it was more likely that GM or Volkswagen or another incumbent that could end up being bankrupt before Tesla were to go bankrupt. I still think that, in large part because of this concept — some of these incumbents are too late trying to get into The EV Revolution.

Let’s keep owning our future as investors by doing what we do — finding trends that are Revolutionizing the planet and getting out bucket out in front of the trillion dollar economies those Revolutions keep creating.

Now, a note about the markets before I go. What a year, what a month, what a year for the indices and for most stocks. Seven days and a S&P 500 move of 3% ago — the last time I’d talked markets, I’d just finished a poll asking “What’s the hardest trade to make right now” and I’d noted:

“The fact that people are still finding it hard to buy stocks even as they are at/near all-time highs underscores how unloved this longstanding Bubble-Blowing Bull Market that we’ve been profiting from for a decade now still is.”

With the markets up another 3% or so in a straight line since I wrote that I think we’re more than halfway through the year-end rally I thought might come along. And maybe, just maybe, the market setting up for a sell off on the first or second week of January? It wouldn’t be a bad thing to bring some fear back into the bull’s hearts, something besides the “Fear Of Missing Out,” that is. There’s little fear, a lot of complacency and perhaps a lot of money trying to mark up their biggest longs into year end. I doubt the near-term top would come as synchronized as coming on the first day or two of the new year, but maybe after a little more a rally into year end and then a week or two of a lulled market to start next year, some fireworks hit and we finally get another 5-10% pullback.

As usual, when I talk about near-term market moves, I’m mostly just getting my thoughts out there and I’m not actively trading on this new working theory about the near-term set-up. But I do think it’s a good idea to have a few hedges on and this week, I will be buying a few more small index puts (SPY, QQQ, SMH, IWM), slightly out of the money, dated out to January and February to help hedge the portfolio’s net long positioning into the new year.

Finally, don’t forget to join me Tuesday morning at 10am ET for this week’s Live Q&A Chat. Come directly to the TWC Chat Room or just email us your question to support@tradingwithcody.com.

Updates on Sandisk, FFIV and Riverbed
Float like a butterfly. Sting like a bee...
Chat Transcript: Strategies, definitions and explanations for all your questions
Social butterfly.  Social security.  Soc...
Starting to get ready for higher inflation