Money might make the world go round, but growth makes the economy and markets go up. That’s one of the takeaways from my time at the SALT conference, put on by my old pal Anthony Scaramucci and his Skybridge Capital firm and which they bill quite accurately as “global thought leadership forum fostering collaboration at the intersection of finance, technology and geopolitics.”

I ran into some old friends like John Rutledge, whom I hit it off with backstage on a CNBC Kudlow & Company appearance more than 15 years ago. I reminded him how he once told me that people in an economy are like batteries — and he explained his theory to me again about how all that stored energy inside of people that gets unleashed in free(ish) economies creates prosperity and feeds innovation so that the people-batteries get even more efficient and productive…another self-feeding cycle, which the economy is so full of, both virtuous and vicious.

He also talked to me about how China isn’t quite the dictatorship under Xi that people make it out to be because the group of leaders who head the Communist regime there all vote and debate and decide the policies. Which is part of why the negotiations around the Trade War are still so details-deficient. Like I asked last week though, has the Trade War even mattered much at all this year, really? If my theory about how the US economy is actually starting to heat up again because all the executives who have been pausing investments and major strategic decisions because of Trade War concerns are now making those investments and strategic decisions that had been on pause is correct…then maybe the Trade War did have a temporary slowing effect that’s now going being reversed. But anyway, the Trade War was certainly the most over-riding macroeconomic theme at the conference.

The most important theme to apply to our markets analysis that I picked up at the conference was much more about how much money is out there still desperately looking for returns. It’s in large part because so much of the developed world, from Japan to Germany, are dealing with negative interest rates. And that means trillions of those dollars out there in those economies are trying to flow into the US where they can at least get their money back when they lend it to a bank or the government. Here’s how I’ve explained that before:

The Fed’s back in a full-fledged cutting cycle, despite bank and corporate profits and buybacks being at all-time highs. President Trump is vocal about wanting more easing and cuts and monetary stimulus from the Fed (maybe that’s part of the motivation behind these repo purchases that the Fed’s started doing in big size lately — stealth easing to appease President Trump). I’ve long considered getting much more defensive when the Fed switches to an easing cycle from a contraction cycle but I’ve hesitated this time in large part for several reasons, the most important being that the US is just about the only developed economy to still offer positive interest rates. Most countries in Europe and Japan and elsewhere around the world are dealing with negative interest rates, meaning that you get less than a dollar back on the dollar for lending those governments money. The only way that even happens is if the governments in each of those respective countries are forcing people, pensions, banks and corporations to invest in government bonds. Those aforementioned people, pensions, banks and corporations in those countries are trying to get every dollar they can over the US and/or other relatively safe havens that still offer positive near-risk-free returns. That means money is flooding the US even as the Fed is entering a cycle to further flood the economy and markets with dollars. This is likely to help asset prices including stocks.

So to reiterate, there is so much money out there, and it’s all desperately looking for returns. And while I’ve talked about how artificially low (including negative) interest rates have forced savers around the world further out on the risk curve many times, it was hearing the many managers of pensions and sovereign wealth funds and family offices talking about how they are investing in alternative assets and ideas to try to get better returns that drove home that trend.

But interestingly,  I was one of very few traditional long/short equity hedge funds that I met there. Most of the hedge fund managers we met were running hundreds of millions or billions of dollars trading derivatives or credit spreads or currencies and so on, and most of the major funds were also looking for those kinds of investments. Of course, the lack of focus on traditional stocks and funds that invest in publicly-traded stocks makes me think that there is probably more opportunity in such assets than people realize. I certainly see some very compelling long ideas in Revolutionary companies like WORK and TWTR and TSLA (though I’d rather trim than chase TSLA here today after a hedge fund buddy just pointed out that the stock is basically at its all-time high. I’m still very bullish and long Tesla both personally and in my hedge fund, but I’d rather trim it than buy it today at ($383, up from the $200s when we started buying it and tweeted about it) and other names in the the portfolio that look quite under-appreciated as long-term investments. 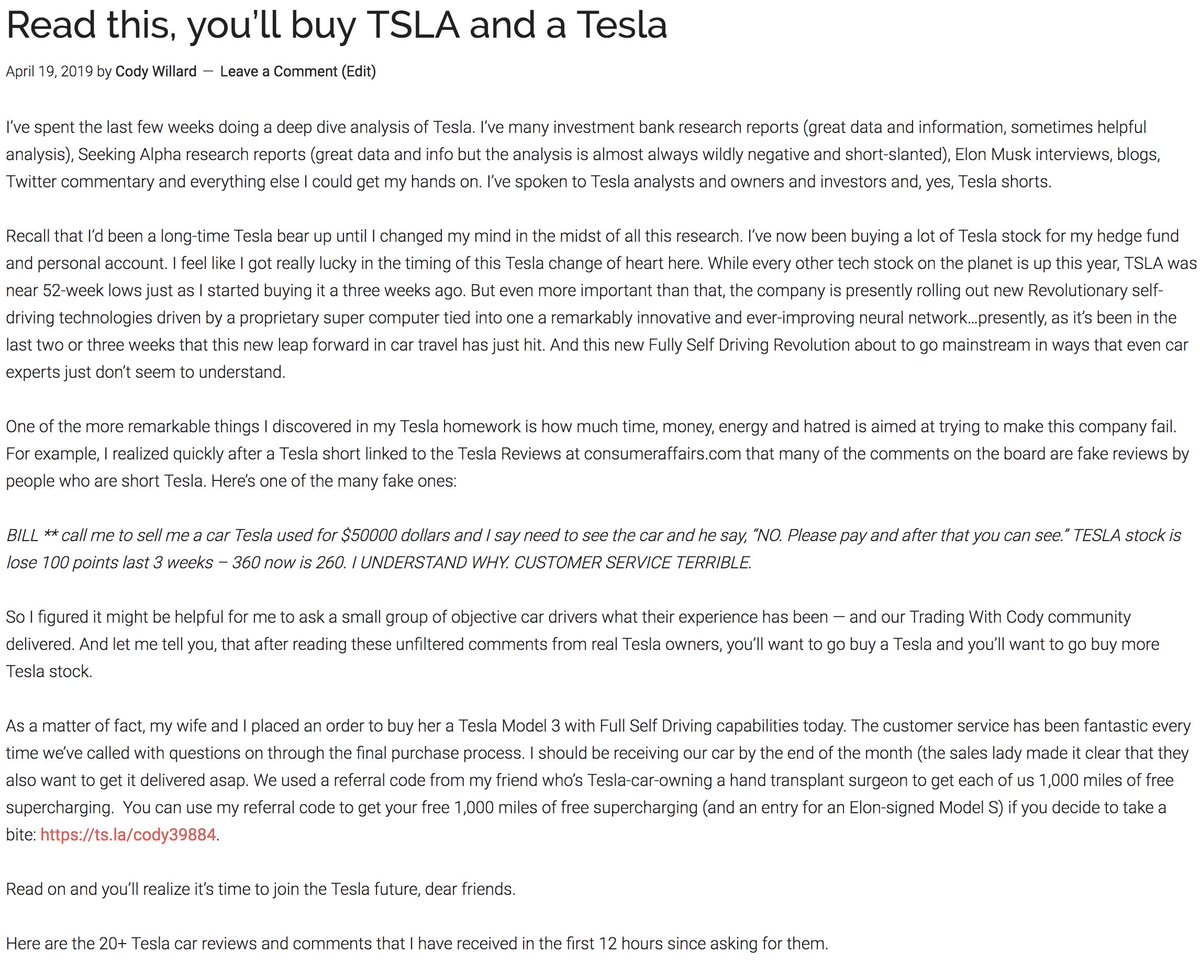 As for trading, I’m mostly sitting tight and mostly long here. I can think of worse ideas than shorting a tiny bit more of our index short hedges like IGV and SPY and maybe trimming some of our longs that are through the roof, including AAPL and TSLA.