Here’s the transcript from this week’s Q&A Chat, including two Trade Alerts — trimming a tiny bit of SPCE and hedging a part of our BA position with puts.

Q. Can you think of any sign(s) to watch for that might indicate an end to the current rally?

A. Perhaps the end of this current market rally will come when the shorts finally give up. Watch Twitter for shorts covering their positions and/or even going long. I haven’t seen that yet. Perhaps the end will come when the day traders feel invincible and the momo traders are sure they’ve got the markets figured out. I’ve seen a little bit of that this week. We’re probably closer to the end of this current rally than the beginning, but again, as I always warn, trying to game short-term market moves and/or trying to time a top in the market is usually a fool’s errand.

Q. Hi Cody, First off, thank you as always. Last year was a great year and then I put a good chunk of cash into FB, SPCE, WORK, DIS, TWTR, QCOM, UBER, TSLA at the beginning of December and WOW! What a great 6 weeks! Phenomenal! Thank you. For me, DIS is slightly down and WORK is flat, but the others have rocketed! Question: I still have about 25% of cash sitting on the sidelines. If this were you, would you put some more in say, WORK, or others in the top list or wait? Thank you again!!!

A. I’d probably suggest sitting mostly tight for now. Maybe nibble a little more WORK and/or DIS if you don’t think you own enough. Can’t time the markets, but now does not feel like a great long-term time to load up on stocks.

Q. I’m already up 127% in my SPCE position. I wish I had bought more! What would substantiate such a rise?

A. Remember when I wrote about how I expected a burgeoning excitement about the ability to make trillions of dollars in space was likely to start inflating a Space Stock Bubble? Well, that might explain most of this 150% move in SPCE over the last couple months. Virgin Galactic’s valuation at $10 was less than $2 billion. Now at $18, it’s $3.8 billion. This is a smallish cap, speculative venture-capital-like investment, so expect volatility and a wild ride (pun intended).

Q. Cody; After listening to your podcast I have a better understanding of your strategy going forward. I really appreciate your advice and am especially thankful for TSLA and SPCE. What about BA?

A. How Boeing has handled the entire 747 Max tragedy has been disgusting. I’m sick of holding this stock and truly shocked at the emails that we’ve seen released that warned about the Max before it hit market. On the other hand, it sure looks like a lot of this crisis is already priced into the stock and if IF Boeing can start delivering Max jets again in the next year, there are many years worth of deliveries ahead. All that said, it wouldn’t shock me to see BA get hit another 10-20% before bottoming, even if everything works out. We might want to buy a few puts dated out to June with strikes below $300 or so, just to hedge. In fact, consider this a Trade Alert — I’m buying some BA puts dated out to June with strike prices $300 or below.

A. The stock is usually the better/safer bet, but maybe with a tiny bit of capital, sure.

Q. Is it time to trim some SPCE? Stock has had an amazing hyperbolic move up. Just feels like it’s time to take some chips off the table.

A. Nothing wrong with trimming a little bit to lock in some profits. In fact, please consider this another Trade Alert — I am going to do the same here, trimming maybe 5-10% of my SPCE after this amazing spike here since we bought it over the last few months and weeks.

A. Awesome move is right! Thanks, past performance isn’t indicative of… LOL. Seriously though, please see Trade Alert about trimming a tiny bit of SPCE above.

Q. This is the tricky part, knowing when to take profits, versus holding on to your winners.

A. Oh, I’d say the really tricky part is when our stocks are down and you don’t know if it’s time to add or bail. As for taking profits, I suggest trying to have your cake and eat it too — trim a little, but keep a core investment if you believe in the company for the long-term.

Q. You’re perfectly right, that is one of the most difficult part of investing. That is why I like very much Cody’s approach, 10-15% trimming but holding on to the core of the position unless something fundamental changes (done the same with TSLA).

A. Amen! By the way, here’s a pic of an old Virgin Galactic aircraft that I took yesterday at the Spaceport USA: 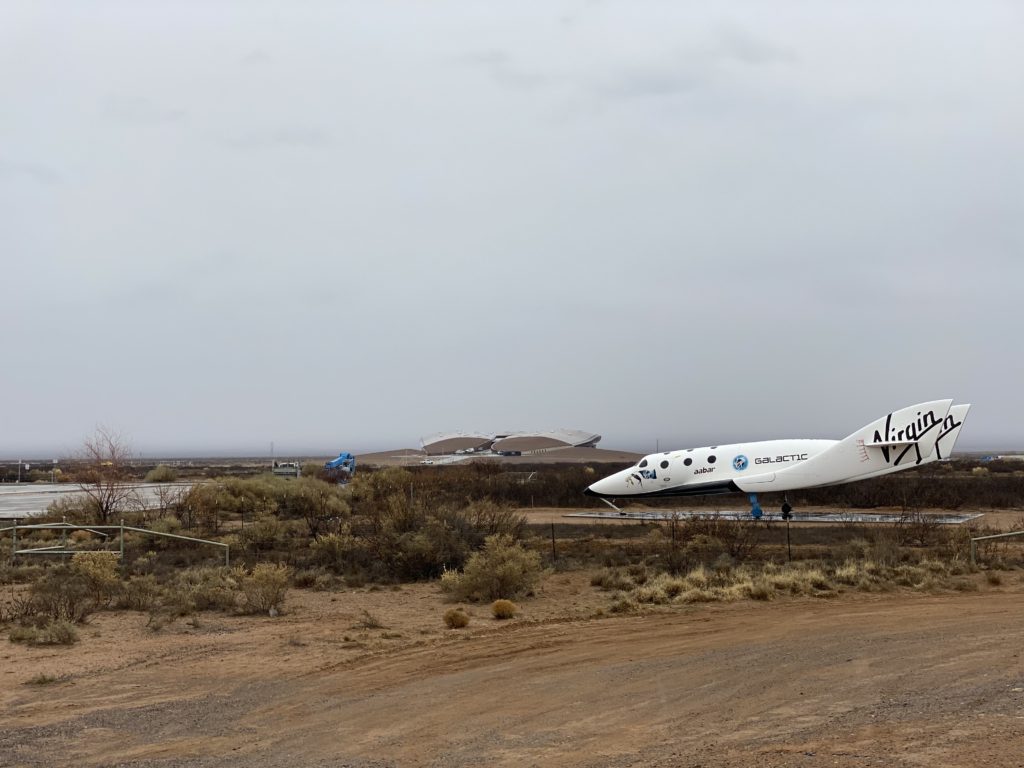 A. Eh, not yet. The quarter was fine, but the valuation isn’t all that compelling here.

Q. You mentioned AJRD in your podcast but don’t remember you sending out a note about buying them. How much do you like them here?

A. Here’s what I wrote when I bought them. I’m writing an updated analysis for them for the Latest Positions update today or tomorrow. “Aerojet Rocketdyne (AJRD) which has been making rockets to send stuff to space since before and including the Apollo Missions. The company has been acquired, spun off, merged and so on for decades, but it’s probably poised to benefit from the coming Space Bubble. The company might have to acquire some startups to stay relevant but with a $12 billion market cap and a history of M&A&Spinoffs, I think it might do so.”

Q. Hi Cody, any new thoughts on OPRA. Recently sold off and you mentioned in a previous call that you would have a look at it. Hated stock at the moment, do you see anything interesting?

A. Yes, I like the fact that OPRA got slammed because some research firm that was probably short the stock wrote a negative report calling for 70% downside. I haven’t done much work on OPRA in a while, but I’ll dig in here. Looks interesting as a potential long.

Q. Cody: Hi Cody – What are your thoughts on Taiwan based Foxconn? Conceptually similar to TSM but in the contract manufacturing space with a ton of mfg process IP.

A. I think we have plenty of exposure to Taiwan with our TSM bet. Also, TSM has much more competitive advantage than FoxConn IMHO.

Q. Regarding BA puts Trade Alert: Do you execute your trades yourself, i.e., hands on? For example, are you entering orders for BA puts at the same time you are interacting in the Q&A? Or do you delegate the task of actually placing orders?

A. I do it myself. It didn’t take but a second to execute the trade after having analyzed the price of the puts to answer the BA question anyway.

Q. What do you think of Grayscale Bitcoin Trust as a way to gain exposure within an IRA. I realize there is a premium associated with it, but am thinking that if Bitcoin appreciates significantly, the premium will not matter much.

A. I don’t like overpaying for anything ever but if it’s your only option to get some small exposure to Bitcoin, I suppose it’s not the worst.

Q. Do you still have same conviction about WORK, or is something giving you pause?

A. I always analyze each stock afresh when I do my Latest Positions round up. Nothing’s changed except I want to step back and analyze WORK afresh just like I always do each time with each stock.

Q. Is this a good time to add some FSLR?

A. I can think of worse ideas than nibbling a little bit of FSLR in the low $50s.

Q. If you had limited cash and could only buy one put of BA what strike price would you choose in June??

A. I might just not buy the put, maybe just trim a little bit of the BA common stock instead. The $290 is probably the fairest price of the June puts I looked at.

Q. If Tesla runs up to $1000 or even greater, then the current price is still a good price to get in at. Should we be buying more into Tesla?

A. The very premise of this question makes me want to trim rather than buy TSLA here. I made it my largest position back last spring the low $200s. It still is. But I suggest trimming not buying when we’re talking about a stock doubling after it just tripled off the lows.

Q. Thanks for the latest positions update. I was wondering what you don’t like about DDOG and the things you do like. There growth is hard not to like! Looking at TDOC also?

A. I like DDOG, but the valuation is wildly high with the stock trading at 24x next year’s revenue estimates with a 40% topline growth. The company isn’t profitable and won’t be turning profitable this year unless something really ramps for them. TDOC isn’t growing as quickly, just about 30% topline growth and the company is probably even further away from profitability than DDOG. TDOC is trading at 11x next year’s revenue estimates. If the stocks were cut in half, I might get interested in each of them. Not at these levels, not right now.

Trade Alert: New pick for the VR and SmartCar Revolutions
Trade Alert: Insights, answers and scaling into more of one tech stock
Trade Alert - Two new positions and revisiting an old favorite
Trade Alert: The Only Streamer Focused on Sports
Trade Alert: Beware The Frauds When The Tide Goes Out