Holy crap, how about that move off the bottoms when we were buying Friday???

The extreme moves in the markets and stock prices and economic activities lately remind me to use my theory of my Kurzweil Singularity Rate of Change which I define as:

What happens if it all works out?  Even if it doesn’t work out, how low will we go and how long will we be there? I’ve talked for years (ironically) about how the economic/stock market bubbles and busts that we live through run on ‘Internet time’ which means they happen much more quickly than in decades past. Reading Ray Kurzweil’s The Singularity Is Near has helped me understand that I shouldn’t call this concept ‘Internet time’ because that’s a bit too limited of an explanation for it. The fact is that mankind itself, our society specifically, is growing our innovation, prosperity and economies exponentially. And if there will be billions of times more technological advances in the next few decades as there was for the first few millions of years of mankind’s existence, then you can imagine that the ups and downs and bubbles and crashes will play out many times in the next few decades but that the general trend of technology, society, the economy and the most Revolutionary Stocks in the markets, will all be quite hockey stick up over those next few decades.

Think about how quickly the world is adapting to a world in which China is less important politically and economically than it was before the double whammy of Trade War and Coronavirus changed its trajectory, at least for the near-term (1-3 years). Perhaps the single biggest consequence of this Novel Coronavirus is the fact that China’s Communist Government has probably lost any leverage they might have had in their dealings with the US and many other developed countries. For example, China will be desperate to keep US companies from moving their supply chains and building new factories in other countries and the need to be in China for its growth in demand is going to be questioned near-term. Will the Chinese Communist Government stay in power? Will it have to strike out at Taiwan and/or Hong Kong and/or do something else drastic to rally the people on the mainland? Or will this Covid-19 catalyzed crash of its near-term economic activity change nothing at all for the country’s political status and markets and government and economy? If that’s the case, does that China booms mid-term (over the next 3-5 years) in either circumstance?

I went back and looked at my trades and analysis since December to try to get my head around how quickly these cycles are playing out. Starting from my most recent analysis and going back to December, I’m astonished at how quickly the ups and down and economic cycles are indeed playing out:

February 28, 2020: Trade Alert: Here’s the playbook “It’s another ugly open, and everybody expects the close to be even worse, since they assume nobody wants to buy before the weekend. I think people were thinking that yesterday already and that means maybe everybody who wanted to sell before the weekend already has. I’m putting some limit orders in on almost every long position in the portfolio.”

February 27, 2020 Trade Alert: Getting a little longer as the market panics “Fear is palpable. Panic is in the air. Stock markets down 10% in a week. Headlines blaring fearful news. Time to nibble. Time to cover some shorts.

Two or three trading days later, there was almost no fear out there in the markets today as people scrambled to buy, cover and chase.

Back in February, I’d gotten more hedged with puts and shorts and trims and sells as I got so cautious in part because the markets and many of our stocks had blasted higher so quickly, as in like at a Kurzweil Singularity Rate of speed. Did the market completely price in these near-term negative possibilities for China and then move on from this event already?:

Of course, my cautiousness had come after we’d started the year off with me very bullish on all of our names and specifically on names like Tesla and Space which had then tripled to start off the year into February — again, one might argue they were discounting their future potential at a Kurzweil Singularity Rate — and almost all of our other stocks had gone through the roof. Again, it’s the extreme moves in the markets and stock prices and economic activities that’s got me looking back at this analysis as we try to grasp what is going on in the markets and the economy:

Looking back at this analysis and looking back at the action the past week alone, I can see why I’m sort of emotionally exhausted with the action we’ve seen in the markets so far this year. The analysis here is interesting in part because of how quickly my analysis and bullish vs cautiousness has been changing lately too. I can’t believe the ride we’ve just had.

Perhaps the key to preparing our portfolios for what comes next in the market is to continue being prepared for a near-term volatility and occasional market mini-crashes like we just experienced. To keep some puts on the sheets, mostly dated out one month or so and some index shorts on there too. Because the markets could tank right back down again if there’s another macro-economic catalyst that rocks the world’s psychology if not the world’s economies. And the markets might have to tank here and there and fall even further than Friday’s lows before it’s done dealing with the coronavirus.

The virus issue, unlike many other macroeconomic issues that I’ve looked past repeatedly over the last 10 years that I’ve been bullish and long, has the potential to get even worse and it’s not something we can just guess is going to go away without dealing some mid-term economic and near/mid-term market damage.

On the other hand, it could also spur some near-term economic activity ex-China and specifically in the US. The US-based global companies are going to invest in new factories and new supply chain redundancies and so on.

Regardless, as I’ve repeatedly explained, with the rest of the world suffering from negative interest rates and weak economic growth, there are trillions of dollars that keep coming to the US, driving down our interest rates and inflating our stocks and other US-based assets. That’s likely to continue here for sure, right? Well, nothing’s for sure, but it does make sense that the US economy and markets could actually benefit from the coronavirus crisis.

So here’s my playbook. I’m headed to NYC tonight with my wife and six year-old daughter for three days. I’m going to trim down a little bit of my longs into this huge rally and add a few more index puts and rebuild the index shorts a bit when the market rallies like it did today. Once again, I didn’t expect to see many of the stocks we just nibbled on Friday to rally 10-20% or more.

Likewise, if the markets crash 5-10% in the next few days or weeks or whatever, I’ll probably do some more buying of my favorite Revolutionary names.

Especially when the markets and economies and society are living at a Kurzweil Singulary Rate of Change (and pricing things in accordingly, as best as the world can).  Stick with investing in companies that are leveraging the exponential growth of innovation and technology that we are definitely living through.

Now for some deep thoughts on this topic via pictures from my iPhone. 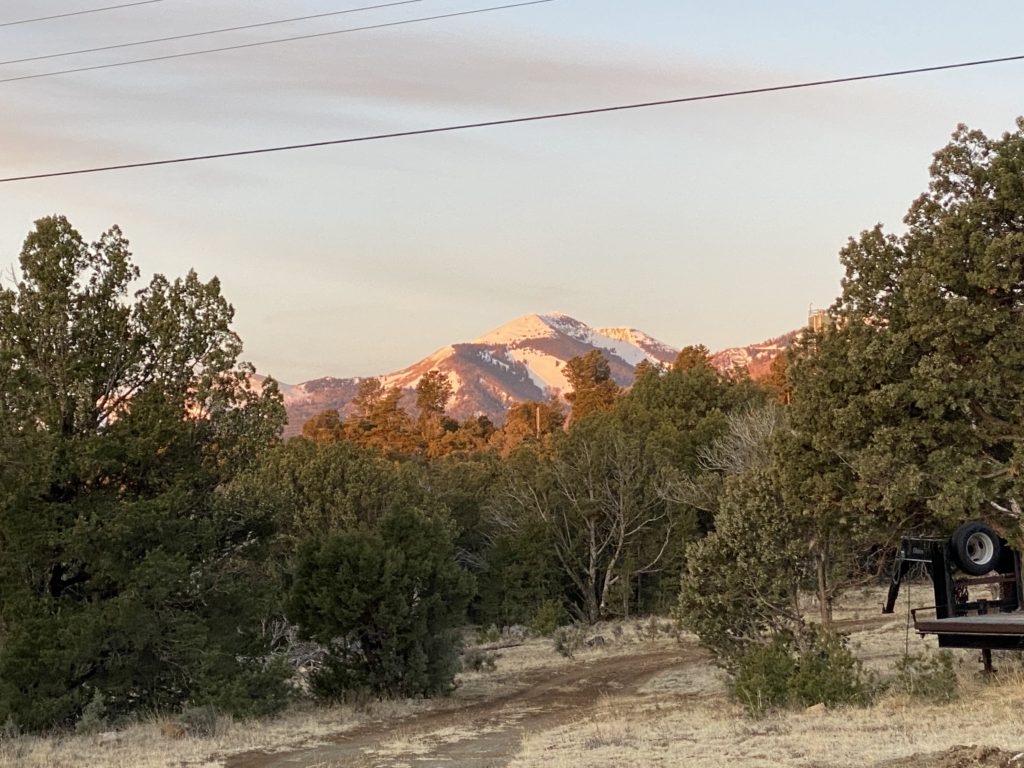 The Tesla’s refueling just like the elk behind it is: 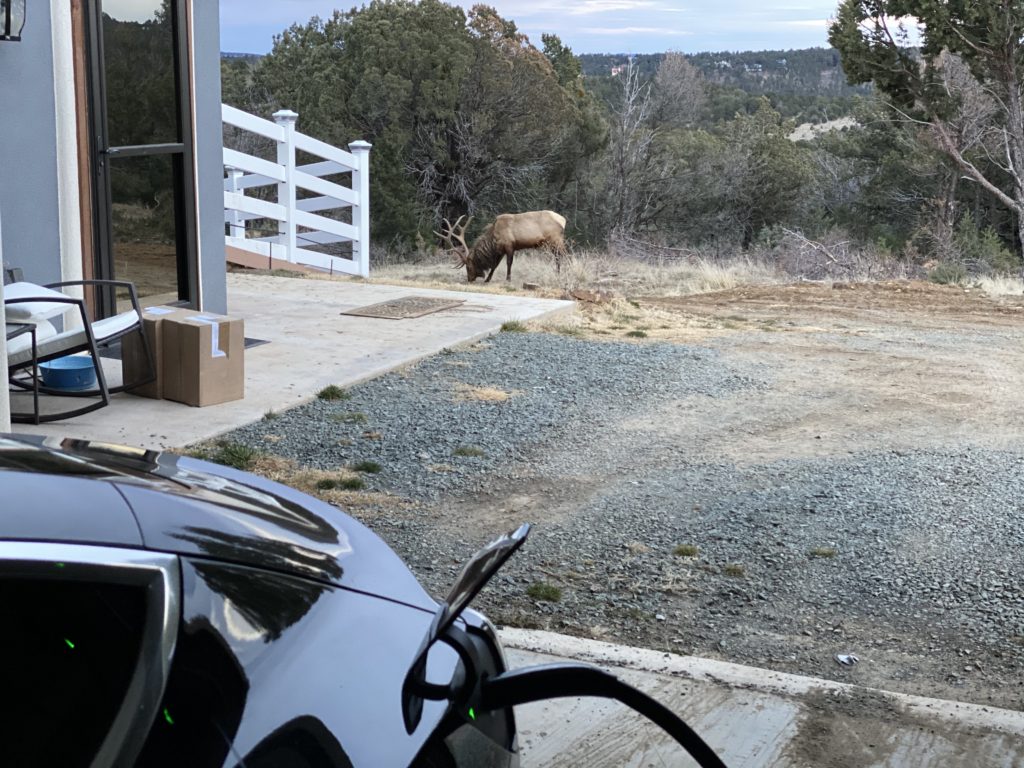 The fifty elk in my driveway yesterday thought that my 4 mph speed was way too fast, but it did stop themselves from banging their heads together day trading for a few minutes: 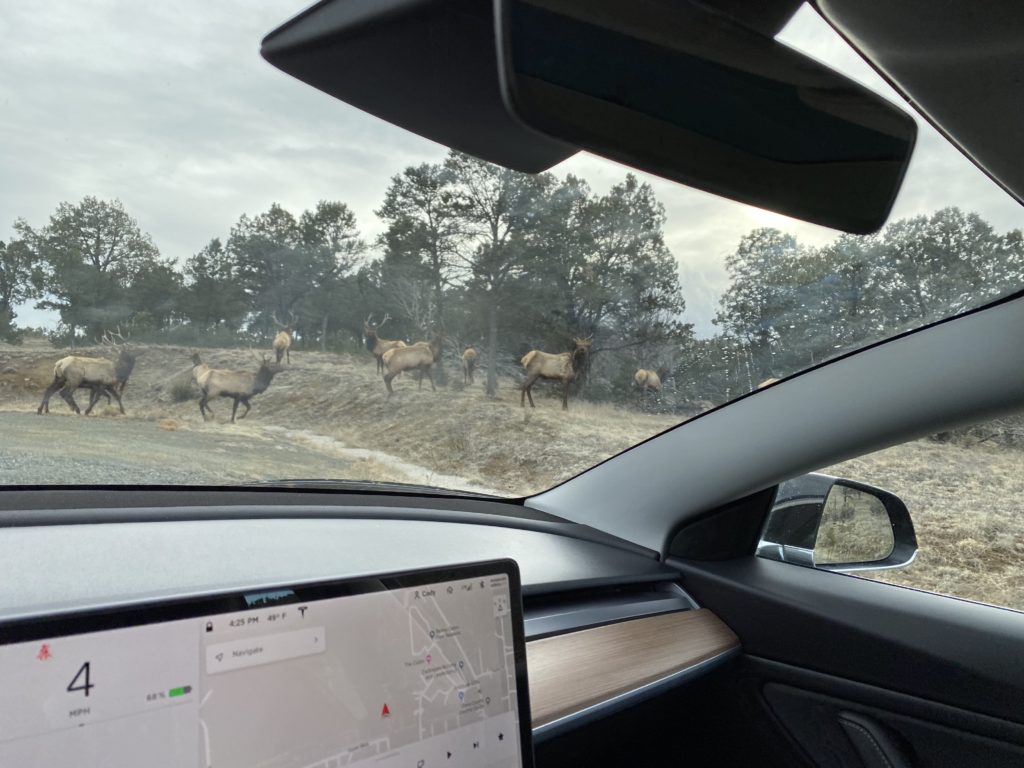 My Great Pyrenees puppy (she’s less than a year old) was pretty sure these elk are her herd (no deep thought on this one, just a cute pic) see the elk behind her: 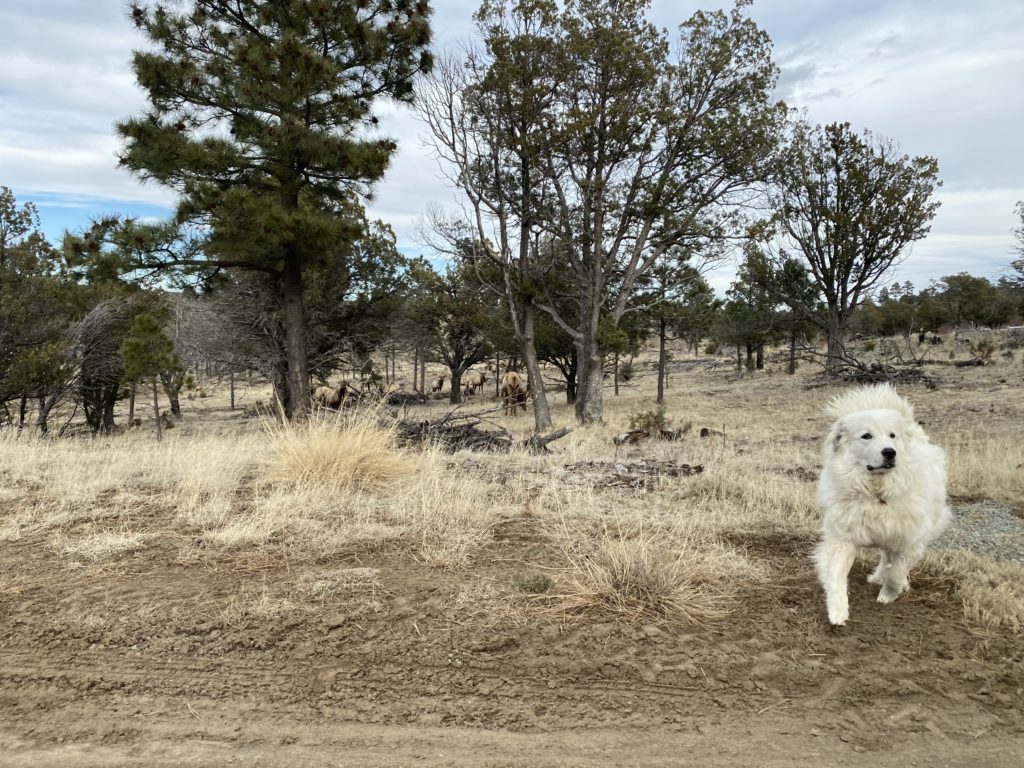 Coronavirus Can Benefit Revolutionary Companies, China Needs Friends, Disney+ Saved DIS, and More
Once again it looks like we will muddle ...
What a week!   We had some losses to sta...
Ask an Apache who's the immigrant around here and other headline analysis
They rode the sunset, horse was made of steel