The economic underpinnings of our society are based on revenues generated from people doing things, consuming things and being together. We aren’t doing things, we aren’t consuming like we did a month ago and we certainly aren’t being together. The NBA is thinking about not paying player salaries after April 1. How many mortgages, boats, cars and employees are going to be let go of by what percentage of the NBA’s 400 or so players? Across the country, 1 in 5 people, and perhaps almost all of us soon, are in total lock down mode. NYC, home of Wall Street and the center the world’s economic universe, accounts for more than 5% of the total acknowledged and tested total cases of Covid 19. The bad news is unrelenting. Has the market already overshot to the downside? Or has it not priced in reality yet? Let’s dig in.

(By the way, I’ll be on Fox Business Cavuto Coast to Coast on Monday sometime between 10am and noon ET, appearing from my office, to talk about much of this analysis.)

So the economy, no shocker here, is in free fall. The market has taken heretofore stable stocks like Boeing down 70% already this year. But the market hasn’t punished all stocks across the board, at least not yet. And if this is going to become a full-on market crash like we saw in 2000 and 2007 and like other generations saw many times, pretty much every stock in the index will be down 30% or 50% or more before the crash would end. Some of the companies in the DJIA are actually likely to go bankrupt with or without government help if the Coronavirus Crisis doesn’t end in by summer or so.

Below is the year-to-date performance of each of the 30 stocks from the DJIA.

Here are a few of my takeaways from looking at that chart. The supposed yield on these 30 stocks from the DJIA is 4.1%, but as evidenced by Boeing suspending their dividend this weekend, there’s no chance that these companies will actually pay out that much in dividends to investors this year. Secondly, I’m surprised there are only four stocks out of 30 that are down 50% so far this year. Boeing is its own kind of mess with the Max jet issues and now the fact that its airline customers have no money to buy airplanes for who knows how long anyway. At under $100 per share, this company is either headed to bankruptcy or the stock is going to come back at some point. The fact is that this company, being a key supplier to the US military too, is “too big to fail” by this system’s standards.

The other two stocks down at least 50% are oil companies, Exxon and Chevron with another one, Dow Chemical, an industrial and energy industry supplier mostly, having bounced 20% plus the last couple days to get out of the -50% club, at least by a 1/10 of 1%.

Next it’s the financials and consumer companies that have been punished the most this year. No surprise that Wal-Mart, which is selling out of much of its inventory in the same way that other grocery stores are, is down the least of all the DJIA stocks. Microsoft, which I recently started buying in part because it is positioned to benefit somewhat from the massive amount of work that’s about to be done online, is down “just” 12.9% with Verizon, which provides a service, smartphone connectivity/mobile voice, that will be just about the last thing most consumers would ever give up (though they might move to lower cost providers) down about 16%.

The market is definitely punishing a lot, if not every stock, and yes, the economy is in free fall, unemployment is going through the roof, revenues for almost every sector in the economy are collapsing. And then there’s oil, which has dropped below $20 a barrel and is another point of pain for much of the US economy.

But the US government, the Federal Reserve is going to save us, right?

Look, in the way I see the world, the universe, is that you have to let the ups and downs of a freedom-based system play themselves out because the government always gets corrupted by special interests and that makes the world ever more unfair, the wealth gap get ever bigger, etc. Whatever we call it— God, the universe, economics — all dictate that individuals and communities and like-minded people in a society are what creates prosperity.

While I, just like everybody else, wish that there were a magic tooth fairy that we can invoke to save us with free money for lost teeth and an economy that’s just hit a vacuum pocket, we have to realize that everything the government does today to save shareholders of poorly run companies like Boeing that have been playing financial shenanigans and borrowing money to buy back their stock instead of investing, growing and taking care of their balance sheets creates new moral hazards and punishes people and companies who didn’t play financial shenanigans; every dollar that the government borrows is a dollar that will have to be repaid by future generations; every dollar the Federal Reserve prints devalues the savings and/or earnings of everybody who saved and is still earning money; every overpriced/faked-priced asset the Federal Reserve buys from the banks and giant hedge funds that literally own the Federal Reserve, also does all of those things.

There’s nothing the government and the central bank can do that comes free.

The good news for the US, as always, is that because our government is less corrupt and our system is better as well as our collective and individual innovations being so much more advanced than any other nation in the world, we have a much better chance of not completely crashing. The US has Google and Apple and Microsoft and Amazon and the best artificial intelligence, the best robotics companies, the best software developers, the best access to capital, the only space exploration companies in the world. The aforementioned companies the the DJIA do more annual revenue than France, Brazil, Italy, Spain, Russia and Mexico combined. No other country can compete with the US and that includes China, which has lost so much political capital, not to mention economic capital, in the last three months as the Coronavirus Crisis has wrecked the whole world’s economy and caused who knows how many deaths by trying to cover this virus up when it first started back in December and January.

And it’s this point, about how the US system and its currency (being tied to world trade for oil) and its people’s ability to create companies that meet new needs and our society’s ability to innovate that can’t be stressed enough.

But that doesn’t mean spending trillions and creating new monetary policies to foam the runways for the banks again will be cheap. I suppose all the advantages in the world don’t help if, going back to a question I asked a moment ago: Is there now enough money in the world to allow the US to just print and borrow 20-40% of its total annual gross domestic product (GDP)?

I also suppose the answer to that question is probably yes for now. In another three months if the world’s economy is still mostly at a standstill, the answer might be very different.

Clearly China and Russia and other countries are claiming that they’ve somehow gotten this virus spread under control. For South Korea and under democratic nations, their appearance of controlling this virus might closer to reality, but it’s harder to believe the autocratic governments of Russia and China’s numbers. If it is possible to contain this virus spread and to get people back to work in another thirty or sixty days and that actually happens in the US, then today’s market has overshot to the downside and buying stocks today will likely feel pretty brilliant in six months from now. If that’s not the case, there’s likely to be another 30-50% downside in many stocks in most industries and most companies with leveraged balance sheets are likely headed to $0.

Regardless of whether things get better or worse from here, I expect that global interest rates are likely going higher, because there’s going to be less cash to borrow from globally, despite the Fed cutting rates and the rest of the world’s developed economies somehow still believing (for now) that they can still borrow money at negative interest rates.

It’s possible that China can’t buy the amount of Treasuries that they used to any more if they can’t ship enough and grow their economy and their deficits with the US as much as we are all accustomed to them doing. The Fed can’t buy Treasuries forever. Or can it? I mean, the value of the dollar might actually benefit from the Fed monetizing debt and printing new money if it does so orderly enough while the idea of the rest of the world looks like, as always, a worse alternative to investing the US.

So here’s the playbook.

I’m going to sell AJRD, which supplies to Boeing and isn’t too-big-to-fail.

I’m going to buy some puts on the TLT, which seeks to track the investment results of the ICE U.S. Treasury 20+ Year Bond Index (the “underlying index”), and generally invests at least 90% of its assets in the bonds of the underlying index and at least 95% of its assets in U.S. government bonds. The TLT will fall if rates rise. I’ll buy some puts dated out three to nine months and will look at strike prices 10-20% out of the money.

And other than that, I’m going to stop trading as aggressively as I have been and will likely let things settle down a little bit before making any major moves.

Nobody knows how long this virus will spread, how long we’ll be on lock down, what the new world order will look like on the other side. That’s just the facts. We can analyze the risk/reward scenarios of most possible outcomes, which is what I’m doing here all the time.

Finally, let’s recognize how this country and each individual community in this country is coming together and helping each other. Let’s recognize that all the US companies moving manufacturing back onshore and investing in new factories when we do get to the other side of this Coronavirus Crisis is going to be a huge boon to the economy (hat said, those factories are certainly going to be built around social distancing standards with lots of robots as much as possible). Let’s recognize that the world is going to be cleaner after this crisis ends and that people will waste less and that we’ll all take less for granted. Let’s recognize that it’s good in the long term to let the economy expand and contract and to wash out excesses and eliminate debt. Let’s love on each other.

I’ll see you in the trenches this week. But virtually with six foot spacing and self-isolation. 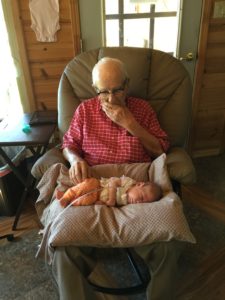 Weekly Live Q&A Chat today at 2pm EST
Everything you need to know about Bitcoin
Trade Alert: Ugh, WDC
Cody Kiss & Tell: Fiscal Cliff Hype, Grandpa Willard, and Investing in China
When the folks on TV are loving on the stocks you own