I’m going to riff on a bunch of related deep thoughts and than summarize them all up at the end with strategy and trading ideas.

(Let’s do a Google talk tomorrow (Friday) at noon for this week’s Live Q&A Chat at 12pm ET. We’re going to jump on the video conferencing train and use Google Hangout Meetings. You can join the video chat at http://meet.google.com/pxk-rrms-kbw. Or you can just post your question as usual in TWC Chat Room or just email us your question to support@tradingwithcody.com and I’ll answer it in during the video chat. I’ll send out a transcript of the whole thing afterward too, of course.)

*Most small businesses aren’t going to be able to get their hands on any of the trillions of dollars that the government is about to hand out. For example, the immigrant owner of the small Chinese restaurant at the corner isn’t going to go through all the red tape, the time and commitment it takes to getting his/her hands on what might otherwise be coming to them from the stimulus package. Think about all the owners of small businesses that you know, scrappy, hardworking people who are now supposed to figure out how to check all the boxes and deal with all the bureaucracy that comes with government “help.” Oh, by the way, there will be a ton of fraudulent actors who will get a part of that “for small business” part of the package. Anyway, this is not a bullish bullet deep thought here, because even in the best case scenario, small businesses and their employees are not going to instantly be back at the levels they were before all this started.

*Some of the action the last few days comes from algo’s and rebalancing portfolios at pension and foundation funds that have parameters about how much stock/bond/Treasury/private equity/etc allocations they are supposed to make. Speaking of which, on Tuesday when the markets were just starting to bounce off their crashed lows on Monday, I was on a UNM Alumni Board Finance Committee meeting where we were talking with our money managers about our money’s allocations and performance. Nobody was worried, nobody really thought we should make any changes to the portfolio. I was a little bit surprised at the lack of worry though it’s good that people on the board weren’t panicking, of course. If part of the market’s ramp the last two days is from rebalancing and algo’s and few of us including me on that Finance Committee call are really worried here, this is probably not a bullish deep thought either.

*Which leads me to my next point — Everybody’s like, hey, the bailouts worked in 2008, they will work this time too. Some analysts say that this financial crisis won’t last long is because it’s a being caused a sudden flash crash economic collapse caused by a coronavirus and not by fraudulent, speculative excesses like it has been the last few times the market/economy tanked in 2000 and 2008. If that’s the case, I’m not sure we should assume that the bailouts and stimulus ideas that the government used last time are going to be the right tools this time. In fact, I’d argue that even in 2008, the bailouts and emergency measures from the Federal Reserve and the stimulus packages from 2008-2010 did more harm than good and the economy/markets/financial system recovered despite those things not because of them. Certainly the government borrowing from the future and printing money can help inflate assets and can help keep the financial system moving. But there is going to be a lot more waste and fraud and mal-investment and crony giveaways in this giant government program just like there is in every government policy that’s passed in the name of helping/saving the economy. And no money is borrowed or printed in a vacuum — there is a cost and someone who is treated unfairly in every act the government does in the economy’s name. So I’m pretty sure the bailout/stimulus deep thought is a bearish deep thought too, not a bullish one.

*The market’s rallies this week and the crashes the past few weeks have been historic but most of the closest comparable trading days of 10% moves up or down come from 1928-1933 and in 2008: 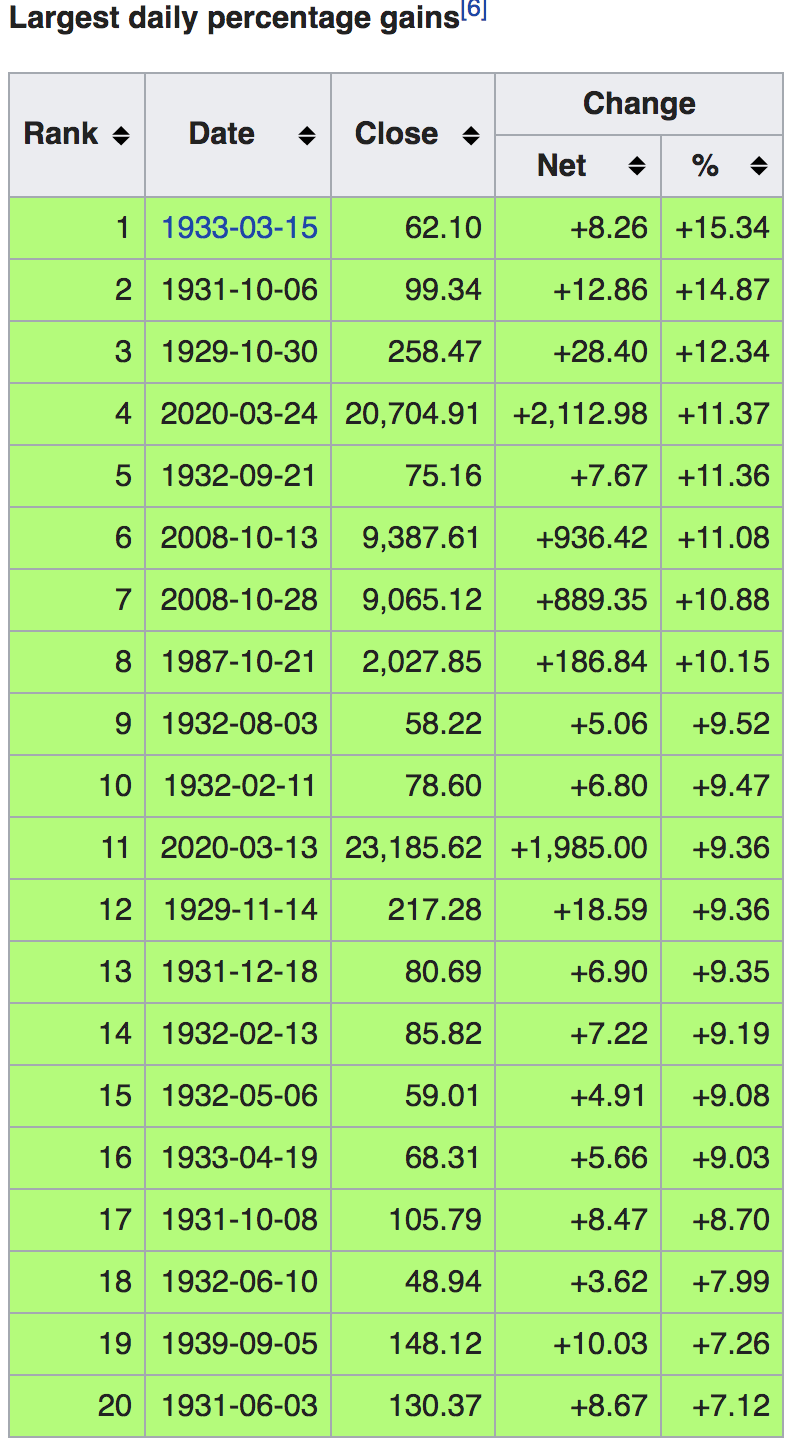 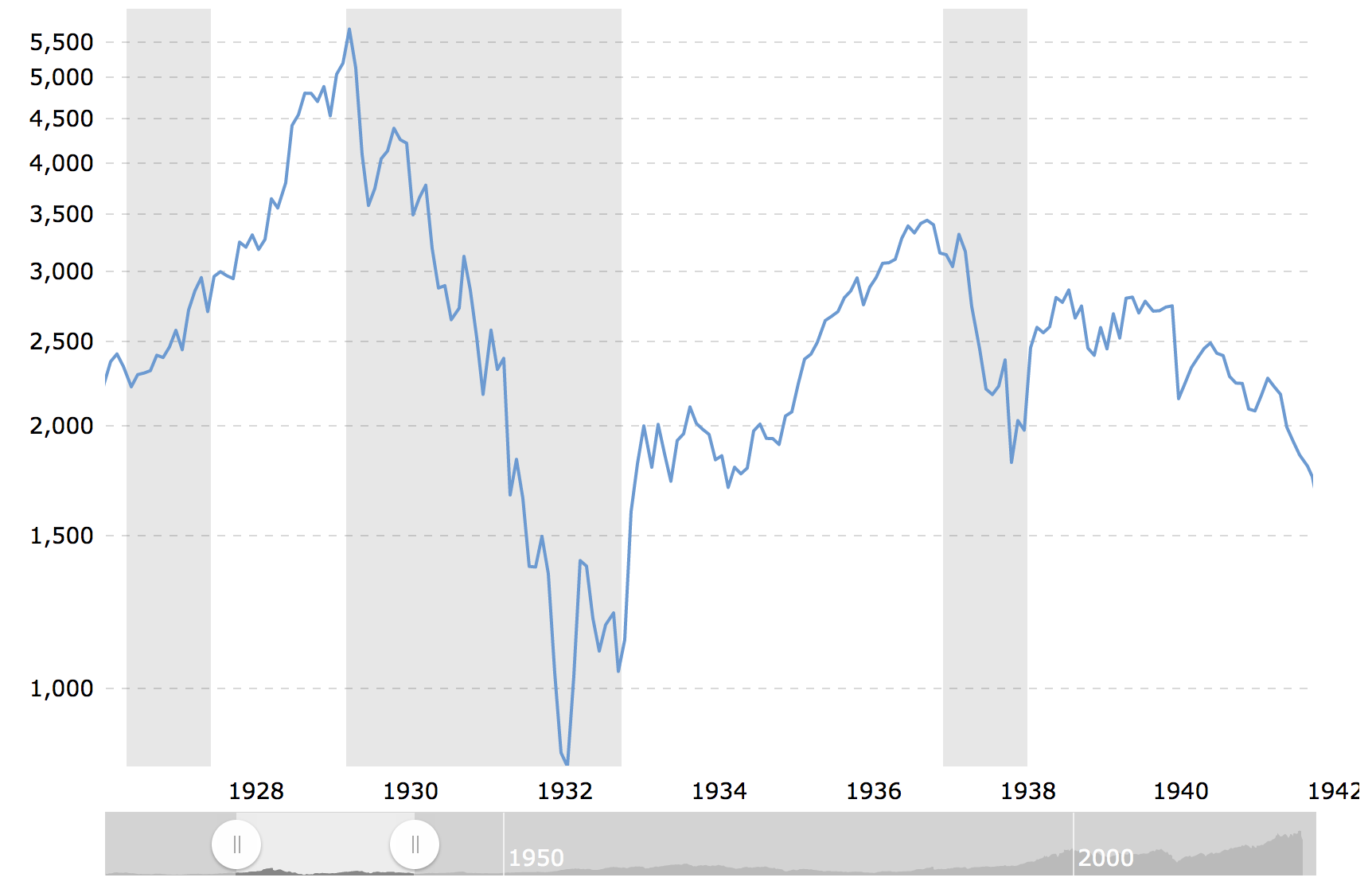 So these early 1930s and 2008 (when the DJIA dropped more than 60%) analogies are probably another bearish deep thought.

*We all want to blame these crazy 10-15% intraday swing in the markets and these 30-100% swings in many stocks on programmatic trading and algorithms but if the most comparable week to this week and the day to these last couple three days were in the 1930s, what did people at home (the low % of people at home who owned stocks) blame it on back then? This one’s neither a bullish or a bearish deep thought, if it’s a deep thought at all.

*Do you remember the Great Depression of 1918/1919? No? That’s because there wasn’t one and indeed, the markets/economy went into a period that was so strong that they still call it the roaring ’20s a century later. Finally, a bullish deep thought for sure, this one.

*I haven’t been watching much TV news lately because there really a very few meaningful updates about this Coronavirus right now and if there were something meaningful, I’d read about it in real-time anyway.  Everybody is at home on lock down by choice or command are watching TV news and trading the same headlines and I’m not sure I can get an edge from what everybody is watching.

*It is expensive  to buy doomsday insurance on the stock markets because the premiums on put options are so spiked. It’s also expensive to buy doomsday insurance on junk markets and other credit derivatives right now. The premiums on longer-dated TLT puts out-of-the-money are quite cheap and if the US/world economies go into full on depression and there’s no money to invest or borrow in other countries rates would likely rise. If the economy were to V-spike rebound after the worst of this Coronavirus Crisis passes, rates would likely rise. Also, I don’t know anybody who thinks that rates on long-term Treasuries will rise anytime soon, which is also bullish for rates. Likewise, there are likely still a bunch of hedge funds and/or banks that are holding a bunch of complex options and futures trades based on long-term Treasury rates staying stable just as Treasuries are just about the only asset class in the world that has not gone completely haywire at some point in the last few weeks. Anyway, I wouldn’t bet much money on this idea, but maybe throwing a little bit of money at some TLT puts dated out to this summer might be the cheapest way to bet on a doomsday economic scenario.

*Looking at almost any individual stock chart, you’ll see a huge crash that then spiked higher in the last few days. Most individual stocks out there on  were down 50-90% and they’ve now bounced some 30-100%, even megacap names. Everybody I know is trying to decide whether to bet on more spike next or more crash next. All this makes me think we might to just churn here. Feet to fire, I’d expect that the markets and many of the most traded individual stocks stay within 20-30% of their current price for the next three months. Another non-bullish or bearish deep thought here.

*While rates are down, at least before the Coronavirus Crisis hit, you could refinance your home in like fifteen minutes or less at all-time low levels. If rates remain lower and people refinance at lower levels that would be a good thing for the economy but if housing prices are going to drop across most urban areas and in many areas across the country as a result of a least some people who were planning to move the cities choosing not to or people thinking about making a big new house purchase choose not to — well, that would be a bearish deep thought.

*Every permabear out there who has been warning about an economic collapse for years and years, warning about things like: How the US consumer is always just about stop spending like they used to and maybe over time consumerism collapses. Or how the fractional reserve  banking system is a Ponzi scheme ready to collapse on itself. And how the fiat petro US dollar and other nation’s similar central banks and fiat currencies are going to end up worthless. And how the endless deficits and giant amount of debt that the US government, businesses and consumers have are unsustainable. Well, if those things are going to happen, now it sure seems more likely than ever before, no? The whole world’s economic system, social systems and support systems just hit a vacuum. And we know that they won’t come back immediately. So yea, this one’s pretty clearly another bearish bullet point.

Today hedge fund manager, Doug Kass, wrote an article called: “Hey Cody, What’s the Hardest Trade to Make Now” and then tweeted to me about it. 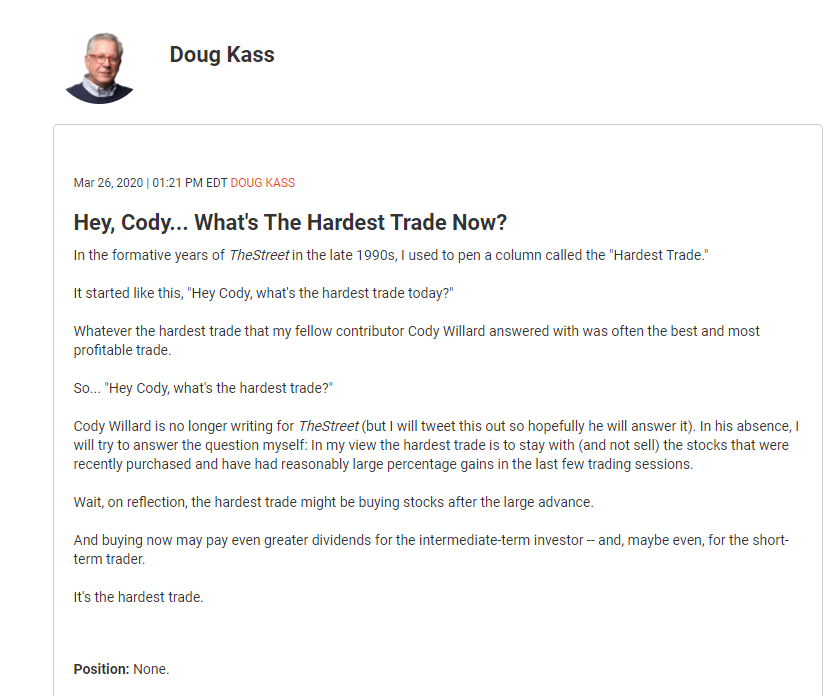 You can see our exchange on Twitter here, but long story short I told him that the hardest trade to make is to raise cash.

So here’s the story. Clearly, after the big rally the last 2.5 days, with the DJIA up 20% off its four-year lows from Monday, the market is no longer pricing in some of the worst case scenarios from above. Clearly with stocks still down huge from their all-time highs a few weeks ago, the market is no longer whistling past the Coronavirus graveyard either. In the last 2.5 days, we’ve done six moths or a year’s worth of action. in the last two weeks, we’ve done a year or two worth of action. In the last two months, we’ve had several years’ worth of action. I don’t think we can keep gaming this by buying/covering into crashes and trimming/shorting into spikes. I don’t think the risk/reward of trying to buy (or to short) the broader stock markets here is not a good idea. I think being too aggressive in our longs is probably not a good idea right now either.

The thing that keeps me bullish is that the most of us in the US, the whole country collectively itself and mankind overall is innovative, loving, helpful, hardworking and industrious. We are innovating at an exponential rate. We are living in a time when money moves instantly around the world and when the amount of trade/inventions/innovations/advancements that happens in one day used to take years. That’s not going to change.

The playbook then: I’m continuing to trim longs and to cover shorts and to raise a little more cash and be a little bit more defensive right now than I was last week before so many of our stocks spiked once again. I’m staying long a core position in all of our names for now, but I’m not looking to press on the gas pedal for now. Perhaps other than cash, the safest place to hide might be gold and bitcoin, but again, I’d do just a tiny bit and not look to get rich off owning gold and bitcoin here. Be cool, be safe.