I started this write-up yesterday around 1pm ET. Then I got pulled into other projects and didn’t get back to writing on this analysis until about 1pm ET today, 24 hours later. And I guess we’re back to a wildly volatile market as the small cap stocks, which are a large part of today’s topic, are down nearly 10% in the 6.5 trading hours since I started writing about it.

The analysis I was writing is still quite pertinent, so here’s where I left off yesterday before the IWM dropped nearly 10%…

People are all like, “It’s amazing that the stock market are basically back to where they were just a couple months before the Coronavirus Crisis hit…” and then they go on to explain why that might be.  However, “the stock market” doesn’t really exist. The underlying value of stock market is the collection of the value of all the stocks in the market. We can also group those individual stocks by different criteria, also known as “indexing,” to see how various sectors of the market are doing collectively. And that’s what I want to talk about today because there is some interesting analysis to ponder when we look at the various major indices of the US stock market.

The Nasdaq, which is the most-tech-centric major index in the US, is indeed back to where it was at the beginning of the year. The S&P 500, the DJIA are both down 10-15% from the beginning of the year, which puts them approximately back where they were for the last half of 2019. But pay attention to the Russell 2000 index which is a collection of 2000 smaller cap, not mega-cap, stocks.

Mind you, Apple, Microsoft, Google, Facebook and Amazon make up about 20% of the S&P 500 and 40% of the Nasdaq (and Apple and Microsoft make up almost 15% of the DJIA). They are not a part of the Russell 2000, and neither is any other stock from the DJIA for example. Anyway, the Russell 2000 index is back to where it was….six years ago. 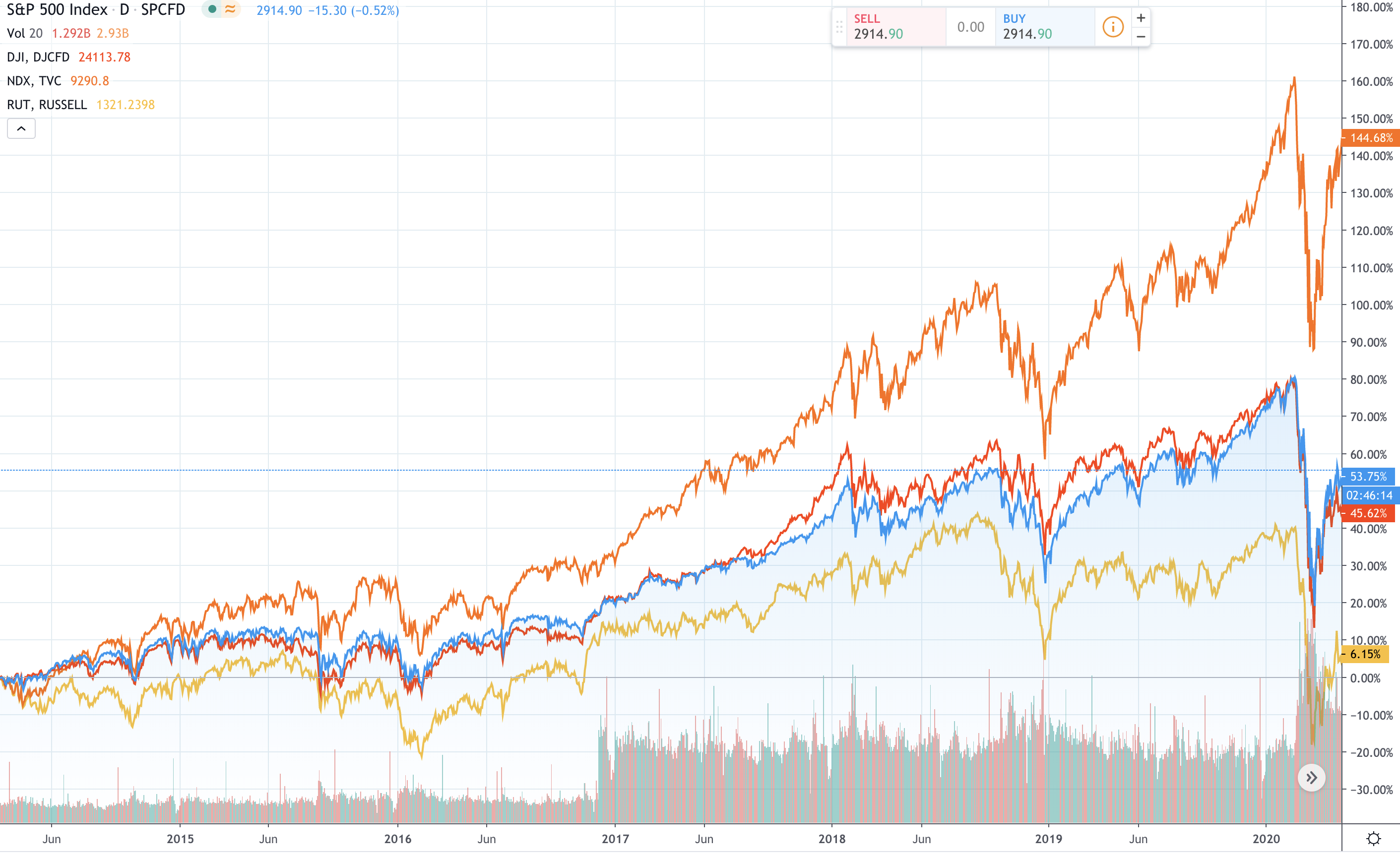 That’s right, since the major stock market indices peaked in late February (although the Russell 2000[s own all-time high actually came back in 2018), the Russell 2000 has given back six years worth of gains. To be sure, the Russell 2000 wasn’t up nearly as much as other indices when it hit that top, as the IWM had increased about 40% since June 2014, while the S&P 500 along with the DJIA increased 80% and the Nasdaq increased 160% to get to those peaks back in February, three long months ago.

Let’s look back at that chart again one more time and you can clearly see how being in the “stock market” isn’t quite as cut and dried as it may seem. You can invest in the wrong sector and underperform for years. Which is what the small caps have been doing in a system that’s rigged for giant corporations. And that rigging has obviously gotten even more skewed in favor of giant corporations vs the smaller guys as the government is literally throwing trillions of dollars at giant, highly-rated corporations who are issuing debt hand-over-first during this Coronavirus Crisis to make sure they have as much cash as possible to get through this crisis, however long it might take. Disney just today issued $11 billion of its own. This chart is outdated just three days after it was published because of the amount of debt these giant corporations are selling to the Federal Reserve (and to some market participants). 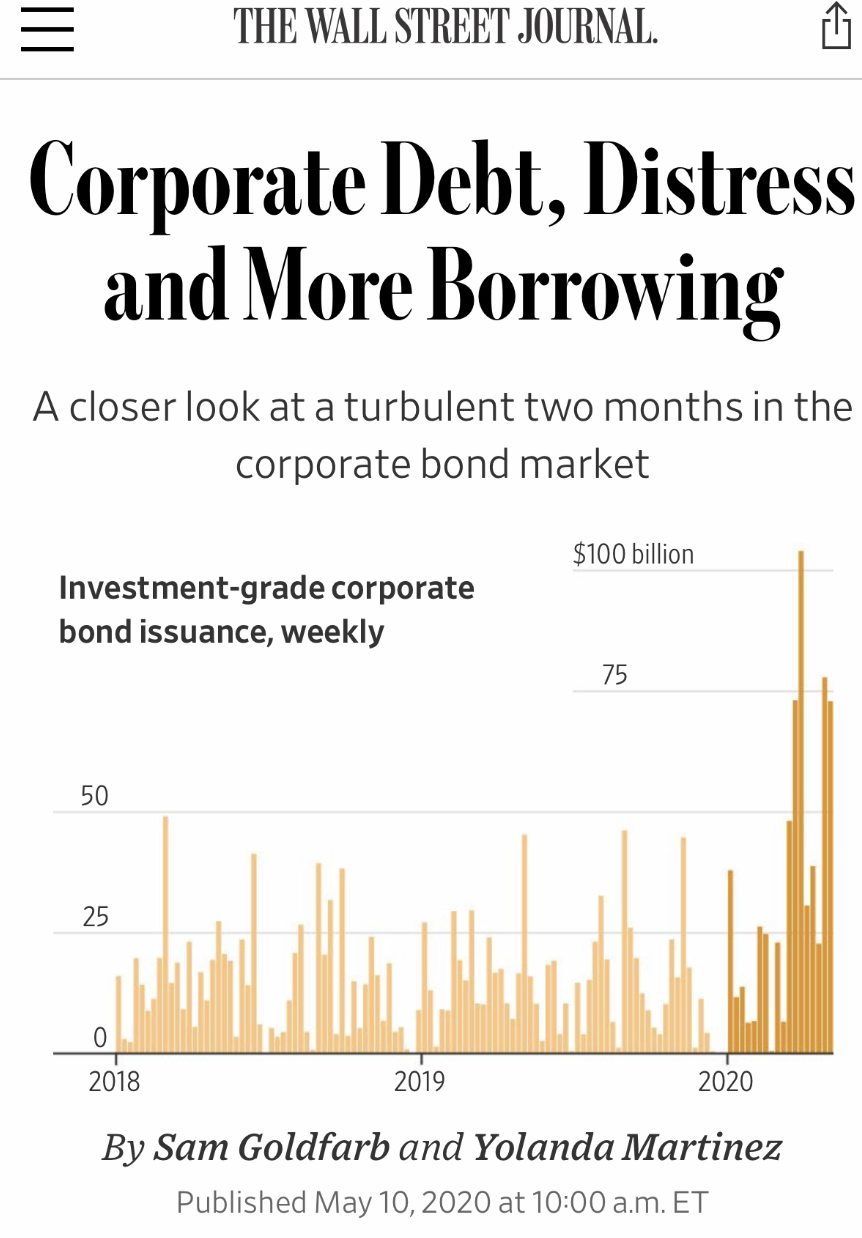 Meanwhile, the smaller publicly-traded companies that need cash to survive here, are probably going to continue to get squeezed, as they don’t meet the qualifications for the Fed’s welfare programs.

The government is picking winners more actively than ever before, misallocating trillions in capital, keeping creative destructive forces from cleansing the bad actors and mismanaged companies out of the system. And the small cap stocks, who might have been able to buy up those crappy companies and their assets when they otherwise would fail during the downturn are just hoping they have access to capital to survive while their larger competitors line their bank accounts with government largesse.

More importantly, this analysis underscores how it’s always a stock picker’s market. If we can continue to put in the time, effort, analysis and creativity that we used to find Apple, Google, Facebook, Nvidia and others when they were small-caps, before they were large cap stocks, and long before they were worth hundreds of billions or trillions of dollars. Recall that I’ve owned Apple since its market cap was less than $3 billion, I’ve owned Google since its market cap was $20 billion and so on. We can find the next ones. We probably have a few in our portfolio already.

As for trading, I’m mostly sitting tight. I am covering a small part of most of my index shorts again, including the IWM here while it’s down 10% in the last 2 hours. I am going to go ahead and sell our MSFT for some small profits. And I’m nibbling another small tranche of our newest stock, a potential Covid-19 vaccine play, Dynavax DVAX.

Remain vigilant with your life and your portfolio.