Here’s the transcript from Friday’s Live Q&A chat. It’s Amaris’s fifth birthday today and I’m going to run home for a birthday party we are throwing for her with her nurses over lunchtime. Here’s a video we took this weekend of her as she’s really starting to learn to walk in her walker. 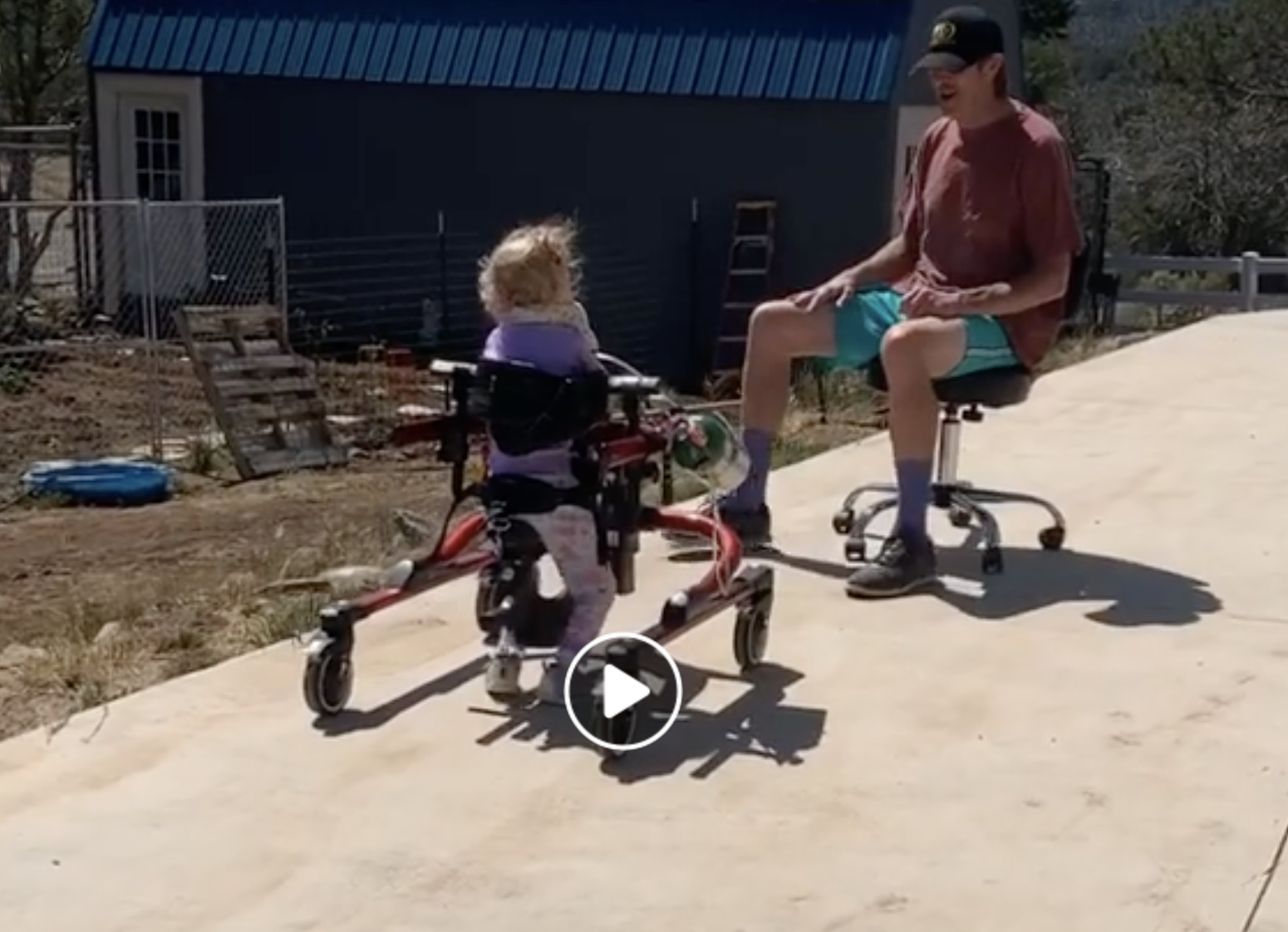 Q. From my perspective, small businesses are trying to crawl back at reduced levels of business. Overhead is down and so is the gross. If a second wave hits hard in the fall, I think a lot of them will go out for good. How hard does the market go down if that occurs?

A. It’s not just small businesses. Imagine all the Hollywood agencies, small and large that have debt and overhead and need production to ramp back up as they are planning for in August and September so that they can generate some revenues…what happens to the agencies if production can’t ramp up? What about all the giant publicly-traded companies who have borrowed billions to buy back stock, do acquisitions, etc and now have iffy balance sheets? Concert companies, hotels, travel-related companies including cruises and airlines, etc? I see more risk to the economy and corporate earnings growth than I have since 2007/2008. IF IF IF there’s no second wave, maybe it all works out. That’s a big if for now, given the added risk that comes with the markets having rallied so far off their crashed lows and getting so frothy now.

Q. Cody, If there’s a second wave it doesn’t sound as though we are going to close down the way we did in March, so the economic impact should be quite different.

A. Yes, it won’t be as severe, but the added costs of making people comfortable along with lower revenues because of lower capacity (and perhaps lower pricing) makes me think that it will be a long before earnings for many companies can return to 2019 levels.

Q. Goldman says the corporate tax cut added 12% to S&P earnings and a president Biden is certain to roll this back. What is your thinking re hedging the election?

A. Biden ain’t gonna raise taxes on giant corporations without creating backdoor ways of making sure they get their money anyway. Until somebody simplifies the tax code across the board, worrying about Republican/Democrats cracking down on corporate taxes is futile.

A. I’d rephrase that to: “It looks like government says they will be doing infrastructure.” I’m doubtful they ever get around to spending money on something that would actually be beneficial for most Americans.

Q. Cody, on the video Q&A a couple of weeks ago, you had strong conviction about interest rates going up… and if I remember right, going up more and faster than anyone believes will happen. With what seems like such strong conviction, should you/we be trying to take advantage of that? Are there any specific stocks or ETFs to buy? Or maybe short some home builders with the thinking skyrocketing interest rates will hurt home buying or mortgages?

A. The problem is one of timing. Yes, I think interest rates will go higher, faster than anybody expects, but that might not start until next year or, heck, five years from now. When it happens, it could get ugly. I do own some TLT puts which would make money if Treasury rates spike in the next few weeks. I might continue to nibble some of those but we’ll see.

A. Sometimes, I wish I’d never started using this “What’s the hardest trade to make now” thingee. It works well when the markets are at a turning point and sentiment is skewed wildly one way or the other, but right now in the midst of all this consensus that there’s a big disconnect between the markets booming rally and the worrisome economy and the markets have had such a huge crash and some have rallied all the way but the DJIA and small caps IWM still remain far off their highs from February…I don’t know the hardest trade to make right now is. Maybe going all aggressively long?

Q. With that said, are you adding any more protection here or sitting tight?

A. I nibble a few puts here and there, maybe scale into a little more index shorts when the markets spike, but mostly am sitting tight.

Q. Hi Cody, can you give us your current top five or six picks, feet to fire, if you had to purchase today?

A. I don’t know…just looking at the portfolio, probably these ones and others and not in any particular order: TSLA, GLD, TSM, QCOM, SPLK, CRSP, SNE, etc.

Q. I have made a half dozen culls since the crash, taking money off the table but always reinvesting. Will you suggest additional selling into this latest run-up?

A. If you’re asking if you should trim a little bit, maybe you should. No easy answers as this part of investing/trading is more art than science.

Q. Lyft going all electric by 2030. Does that change Lyft vs Uber? You still think Uber a much better buy?

A. 2030 is a long way off and I’d expect that Uber will be going pretty much all electric and even autonomous by then too. I still like Uber better than Lyft, but I don’t dislike Lyft.

Q. Glad to hear you survived what sounded like a horrendous ride home.

A. Thank you. Now we have a new electric generator and electric jack for the van (hopefully we’ll never have to use them).

Q. Good morning. I’m an AMZN owner and have been thrilled with the performance this year. I want to buy more but feel like the company is getting a TON of love lately. Is this a good point to buy a small tranche or wait it out?

A. I have to tell you that I just have a hard time thinking AMZN the stock can keep outperforming the market as much as it has for as long as it has. That said, I have owned AMZN for years since it was in the low hundreds and I still hold it both personally and in the hedge fund and am not planning on selling much of it any time soon. The answer to your question is one that I pretty much always give: Maybe do a smaller tranche here now since you know you want more exposure in it but give yourself some room for more later.

Q. Scott Galloway – a noted NYU professor who earlier successfully predicted Amazon’s acquisition of Whole Foods – is now predicting the Amazon’s next big disruption will be the medical field, which on the surface would appear to be ripe for disruption. Might that be the path for market out-performance for AMZN that we’re looking for? Maybe even to a $2 trillion market cap?

A. I like to invest for the long-term, finding stocks that go up 10-fold or more. I think AMZN can move 50% with or without any new business lines, really. I just don’t know that it’s going to go up 5-10x from here over the next five or ten years. I love AMZN, still holding it, but it’s not at the top of my list of buys right now.

Q. Maybe AMZN gets into the telehealth business. I’m reading such an announcement of our rural state’s biggest hospital system about expanding into this area right now.

A. Sounds like there’s a lot of hope/hype in AMZN right now, to be honest.

Q. What do you think about Square’s purchase of Verse? Is this a good strategic move to penetrate the Europe market that can send the stock higher?

Q. I asked about AYX before. You mentioned they were intriguing. When I asked, I didn’t realize profit margins are 90%! 1 bil in bank. 90% profit margins. Looks too good to me. What am I missing?

A. I’d answer that it’s a valuation thing because it’s trading at nearly 20x next year’s revenues, but that doesn’t stop other stocks from tripling. I’m still doing some work on it.

Q. I know you sold out of PANW awhile back. What is your top cyber security play now?

A. It’s just that so many people have crowded into cyber security stocks that I’m leery of most of them at these valuations. I like SPLK and CSCO as cyber security plays though.

Q. Cody, back in the day I found out about you through James Altucher. Or I found out about James Altucher through you… I forget. Nonetheless, are you guys still friends and do you ever talk stocks? I know he usually has some interesting takes and stock ideas. Just a curious question whether you bounce idea off each other anymore…

A. Nah, James and I broke up at some point after I left NYC. I’m not comfortable with some of his choices about promoting small cap stocks and alt-crypto-coins and stuff these days. I’m always happy to talk to any one and if he ever reached back out to me, I’d probably hop on the phone with him and talk life, markets, stocks, crypto, tech, etc.

Q. Morning Please take a look at LVGO Your thoughts?

A. “About Livongo Livongo offers a whole person platform that empowers people with chronic conditions to live better and healthier lives, beginning with diabetes and now including hypertension, weight management, diabetes prevention, and behavioral health. Livongo pioneered the new category of Applied Health Signals to silence Noisy Healthcare. Our team of data scientists aggregate and interpret substantial amounts of health data and information to create actionable, personalized and timely health signals. The Livongo approach delivers better clinical and financial outcomes while creating a different and better experience for people with chronic conditions.” Looks quite interesting and the topline growth of 50%+ is nice.

Q. Cody – whats your take on QCOM moving up….kinda stuck in that 80s for a bit.

A. I’d just called QCOM one of my favorite stocks here…it’s had a helluva nice move off the lows to these new highs, tho, no?

Markets Commentary: Charts From The Dot-Com Crash Don't Exist Anymore
Markets and EU analysis: The hardest trade right now?
Here’s a list of my positions, including our latest purchase from this week...
Hedge fund conference in Abu Dhabi (and a Risk Management Trade Alert)
What you said