For my hedge fund partners at the end of each quarter, I send out some analysis and updates about our performance. Below is a slightly-edited version of what I sent out to my investors about the markets and more.

I’ve been watching a show called Illusions that explains how because our minds and eyes are programmed to focus on things that are evolutionarily important, they can be fooled by clever pictures. When I was in fifth grade I once made one of these for a class project: 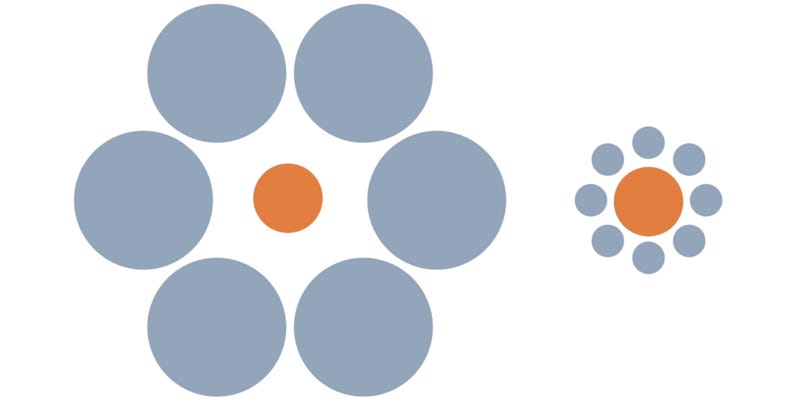 The orange balls in the middle are the same size of course, though it doesn’t look that way. I think there’s a lesson about the follies of basing your stock picks on a relative valuation metric. And right now, while some stocks might look cheap relative to other stocks, I’m thinking that’s partly because the other stocks are looking much bigger than they actually are. More on this down below as I discuss the markets.

Ending the quarter, our largest position is still Tesla, which has been one of the best performing stocks in the world since we made it our largest position back near $250 last year. As Tesla’s quadrupled off the levels where we were loading up on it, I’ve been forced to trim some of it down to keep it from becoming too big of a position in the fund and I’ve also used a strategy of shorting a few call options and usually covering those calls if I have to before they expire.

Our other largest long positions include GLD the gold ETF, Qualcomm, Taiwan Semiconductor, Splunk and Twitter though I’ve actively trimmed all of those positions down lately too along with most of our longs.

Balancing our long positions includes some larger short hedges on the major indexes than I’ve had in a long time, including SMH, IWM, SPY, DIA, QQQ and some corresponding puts.

Looking at the markets, I’m growing increasingly concerned that we’re somewhere in the late innings of our Bubble-Blowing Bull Market and we might even in a blow-off top part of the cycle here.

When I look at the fundamentals and charts of most individual stocks right now, I see more stocks I’d rather short than buy. Valuations are stretched and charts are parabolic, although interestingly sentiment still doesn’t seem quite extreme to the bullish side as many hedge funds and money managers remain stubbornly bearish. And of course, the trillions of dollars that the Federal Reserve and the Republican Democrats in power have unleashed in monetary and fiscal stimulus is working its way through the system and therefore the markets, juicing things even more than they might otherwise be. The question in my mind at this point, is for how long.

And we should always consider the longer-term profitability creation that could come from some of the new conveniences that have come out of the Coronavirus Crisis. Could it be that costs are dropping just as revenue (and/or revenue growth rate) could increase for some of these companies? Likewise, if companies are going to be able to get away with lots of less office space because of The Work-at-Home Revolution, there’s the possibility that profit margins are going to expand along with revenues.

Then again, it’s possible that costs will increase and a lack of demand could make revenues drop. Here’s a tweet from someone who used to work for me years ago and now runs restaurants in New York: “Demand destruction plus price compression plus increased costs means most NYC restaurants are in a death spiral. We need $35k weeks to have a shot at existing.”

The added costs of making people comfortable along with lower capacity (and perhaps lower pricing) would mean that revenues and margins could be in for a hit. Which would then mean, at best, that it will be a long before earnings for many companies can return to 2019 levels.

Regardless, it could take at least a few quarters to work through the hard times of lock down, second waves of Covid, the many bankruptcies of companies large and small in the global economy and so on.

The upshot is that with asset valuations through the roof just as we are in these unprecedented times of pandemic, money creation, wealth disparities, racial crisis, and growing geopolitical tensions, I’m more cautious than I’ve been since back in 2007 when I was worried about valuations in a time of rampant real estate fraud. While I’m not predicting a market crash and I remain net long in the hedge fund and riding core positions in many Revolutionary companies, I do think we are going to have some much better opportunities to invest our capital at more compelling risk/reward scenarios in coming weeks and months.

I’m not going to fool myself into thinking that we’ve reached a new paradigm where valuations don’t matter. The optical illusions are all around us in this economy and stock market. I’ll be careful with what we choose to focus our eyes and our capital on.

And as always, I sincerely appreciate each and every one of you for being a part of 10,000 Days.

Cody Kiss & Tell: FANG stocks, when to sell, and more stock answers
Rock n roll portfolio
We've worked long and hard to build our portfolio so that we...
A glimpse of the future (with a bit of Google propaganda) from -- well, Google...
Making the hardest trade and remembering some Apple history