After years of riding this Bubble-Blowing Bull Market, crowds screaming “De-fense” in this video are me with my TWC subscribers right now, as I think it’s a better time to be defensive than aggressively long stocks, gold, bitcoin, bonds or just about anything else liquid here. I am still net long though.

And this just in: Bit co in. Bitcoin is bitcoing. I am trimming a little. I’d mentioned a couple times  last week that I thought Bitcoin looked ready to break out: “Bitcoin’s looking like it could break out in the next few weeks, both from a fundamental perspective a TA perspective…” 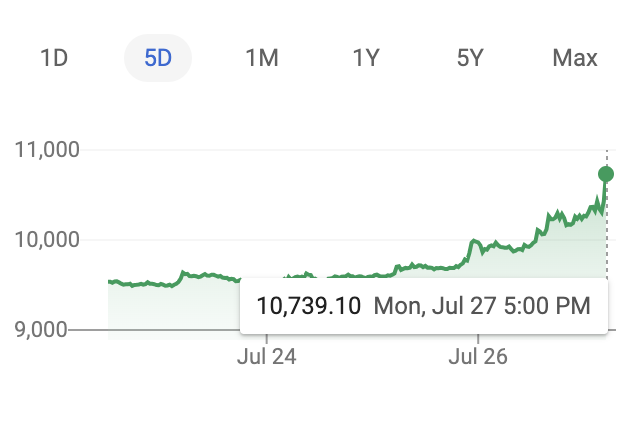 Gold, silver, many stocks, and now bitcoin are going up parabolic these days. Trimming parabolic charts makes sense to me. That said, I’m not trimming much of TSM or AMD or QCOM any more, but I am buying some puts on the SMH, a semiconductor ETF, slightly out of the money dated out over the next few weeks.

I also just bought a couple puts on TSLA, dated out two or three weeks and 5-10% out of the money just to slightly hedge the position.

I'll be looking to scale into some more common in...
The App Revolution will be worth trillions
Cody Kiss & Tell: Drone regulations, contrarian markets, and stocks galore
Jobs report, stock updates and a question from Dr. Jaimie Shores
That is, I don't plan on...