Q. What’s happening Cody, you’ve been so bearish but the market is NOT!

A. I’ve not been outright bearish, I’ve been defensive and cautious. Here’s an example: “I’m not buying much of anything and am getting ever more cautious and almost outright bearish as the bubble is acting a bit like it could be the blow-off top part of the cycle.”

A. Depends on how much you’ve already trimmed, how invested you want to be, what your risk tolerance is, etc.

Q. Bad news with college football and market goes up. I can’t help but think that when this money printing benefits are over with, and the toothpicks that are holding this market up finally crumble, it will come down hard.

A. Castles made of sand fall into the sea, eventually.

Q. Cody, are the markets pricing in vaccines coming out in early 2021?

A. I’m not sure it’s as straightforward as that, but the markets are certainly pricing in some strong earnings for 2021 and/or 2022.

Q. Cody do you see a retest of the March lows in any of the indexes in the next year?

A. I think the markets are overvalued and not attractive from a risk/reward scenario, but I don’t really expect the major indices to retest the March lows in the next year.

Q. Kind of long question here, but I started trading/investing in 97 so I have been through a lot of crashes. Its easy to say the lesson is when you spot a bubble get out, but the truth is 96-2000 was a very long run up, that was ended when the fed really started to raise rates and remove liquidity, after y2k. I do believe that even in this bubble you need to try to take advantage of it, so I think its important to be balanced and not get too scared out of it. with your guidance I have a clear idea of which stocks are investable and at what prices so that I can differentiate between investments and trades and have exit strategies. stocks rarely just collapse without some signs, i.e. you don’t get across the board gap downs of 10-15% without signs in advance. I have become a more cautious speculator through experience, so I think I can “get out” as long as I am clear about which are trades, and I wont buy the real ****, like NKLA, ****’s, NIO…can you comment?

A. I agree with you, that sounds like my kind of thinking. Rock on.

Q. Cody, I really don’t like what I’m seeing from this market going up without considering valuations. Is it time to drastically reduce our positions as the economy is positioned to take it on the chin soon. Jeff Bezos has sold over $7 Billion of Amazon stock. Does he know something we don’t going forward. Elon Musk too? The foundations seem to be shaking. What’s your take?

A. Jeff sells stock to fund Blue Origin and to diversify, etc. $7 billion ain’t beans even for him tho. Elon’s not sold much stock tho that I know of. You know my stance — be defensive, be cautious, but stick with our longs.

A. Not really. I don’t have much appetite for IPOs at this stage and valuations they’re coming public at and certainly not a mortgage company…I’d rather short than buy RKT but I won’t do either.

Q. I have some NOK call options @ $4.00 that expire next week. With the stock trading about $5.05 as of now, would you exercise the options and take the stock or sell the calls, take the profits, and move on?

A. I’d rather buy than sell NOK here as a long-term investment but I have no idea what it’ll do over the short-term.

A. Eh, maybe. I’m a little concerned that one of their hoped-for partners is starting testing of a vaccine that doesn’t use Dynavax’s adjuvant but it sure is oversold and not a bad lottery ticket still.

A. I haven’t looked at CREE in a while, but I just took a look and am quite confused to find the company’s topline revenue DROPPED 33% this year over last year and isn’t supposed to grow next year. The stock’s doubled as part of the EV euphoria Blow-off Toppish Action (TM) in the market and I don’t see much to be excited about here as the stock is trading 8x next year’s revenues with no earnings in sight.

Q. Cree sold a division that made light bulbs so their revenue decreased. They are building a new factory to produce SiC for power electronics EV and 5g. This will take time to play out.

A. Pivoting your business can work out big time…and it can fail big time. I’ll keep an eye on it.

Q. Do you think STRIPE will ever go public? It seems like a business with a lot of promise.

A. The CEO says they’re happy as a private company and they have plenty of access to capital, but probably in the next couple years, I suppose.

A. Hmm, maybe puts more than shorting, but there’s a lot of crappy stocks whose formerly parabolic charts are starting to look busted….CVNA, EGHT, OSTK, WKHS, VIPS, etc etc. Be careful trying to make money on the downside though, you can hurt your portfolio if you’re not careful.

Q. Cody, It seems DVAX has ridden the vaccine wave up and back down. What price reflects the underlying bet on the base business in adjuvant product development?

A. The base business isn’t the adjuvant as much as it is their vaccine for Hepatitis B. Fair value for that business is probably $4ish, I’d guess.

Q. My buddy bought some TSLA after hours yesterday, and I followed. That and some TSLA calls are killing today.

A. Woo woo. You know that I have to state the standard, “Be careful out there!” I loved the risk/reward in TSLA at $200ish (pre-split) and it’s been a great trading vehicle for those who time it well for the last few weeks, but be careful out there.

Q. Can I still sign up for a lifetime subscription to Trading With Cody? Here’s my question. Would you recommend Jumia as an investment. Do u feel Its a possibility Africa‘s infrastructure and GDP could boom with the contingency welfare from China and FB and Jumia could profit from such? Thanks.

A. Why not? Here’s the link for the Lifetime Subscription which includes an annual phone call with me. As for Jumia, I’m not a fan of JMIA and it’s been on a tear from the March lows until it crashed this week. Here’s something I’ve written about JMIA before: “It’s usually better idea to short any company that’s ever promising to be ‘The AMAZON/JPMORGAN/GOOGLE/LEADER/ETC of Africa’ than to buy it.”

Q. As far as e-commerce is concerned, Do you predict OSTK and W to continue their vertical assault on the market?

A. OSTK looks iffy to me and I’d rather short it than buy it. W is a great company, doing well, but the stock looks terribly overvalued and risky to me here.

Q. Cody, CSCO is probably in my top 5 positions along with your other highest rated stocks. I’m glad it’s an up market (at least it’s an up market this minute) when they report tonight. Just wondering about it?

A. I’d mentioned this last week, no update to it: “CSCO seems to always disappoint me over the years when I’ve tried to game its earnings reports. I think CSCO could talk up some market share gains and some momentum in the underlying core business of routers, but who knows what the stock will do the next day. I’ll nibble more if it gets hit hard, most likely and I’ll mostly sit tight if it pops after the report.”

Q. Slack has been getting hammered lately. Anything specific to note here?

A. Not really — I’d mentioned that the stock looked highly valued when it was at its highs a few weeks ago. It’s starting to look more attractive to me here.

Q. I just wanted to thank you for all that you do. I have been reading you since before the Telecom Connection (Remember BKHm , MRVL, JDSU, FNSR, TlGb).

A. Wow, I started writing about the markets in 2001 when I launched a newsletter called “Teleconomics.com” and then I sold my newsletter to TheStreet.com in early 2002, changing its branding at their request to “The Telecom Connection.” Thanks for the memory and thanks for being a long-time partner! Here’s a screenshot of where it all started for me back in 2001. Note my commentary about 9/11, written on 9/17/2001, when I was probably on a friend’s couch in Connecticut without access to my apartment in Manhattan which was buried under the WTC Tower that had fallen on me and my place six days earlier. I wish I could find the whole post. 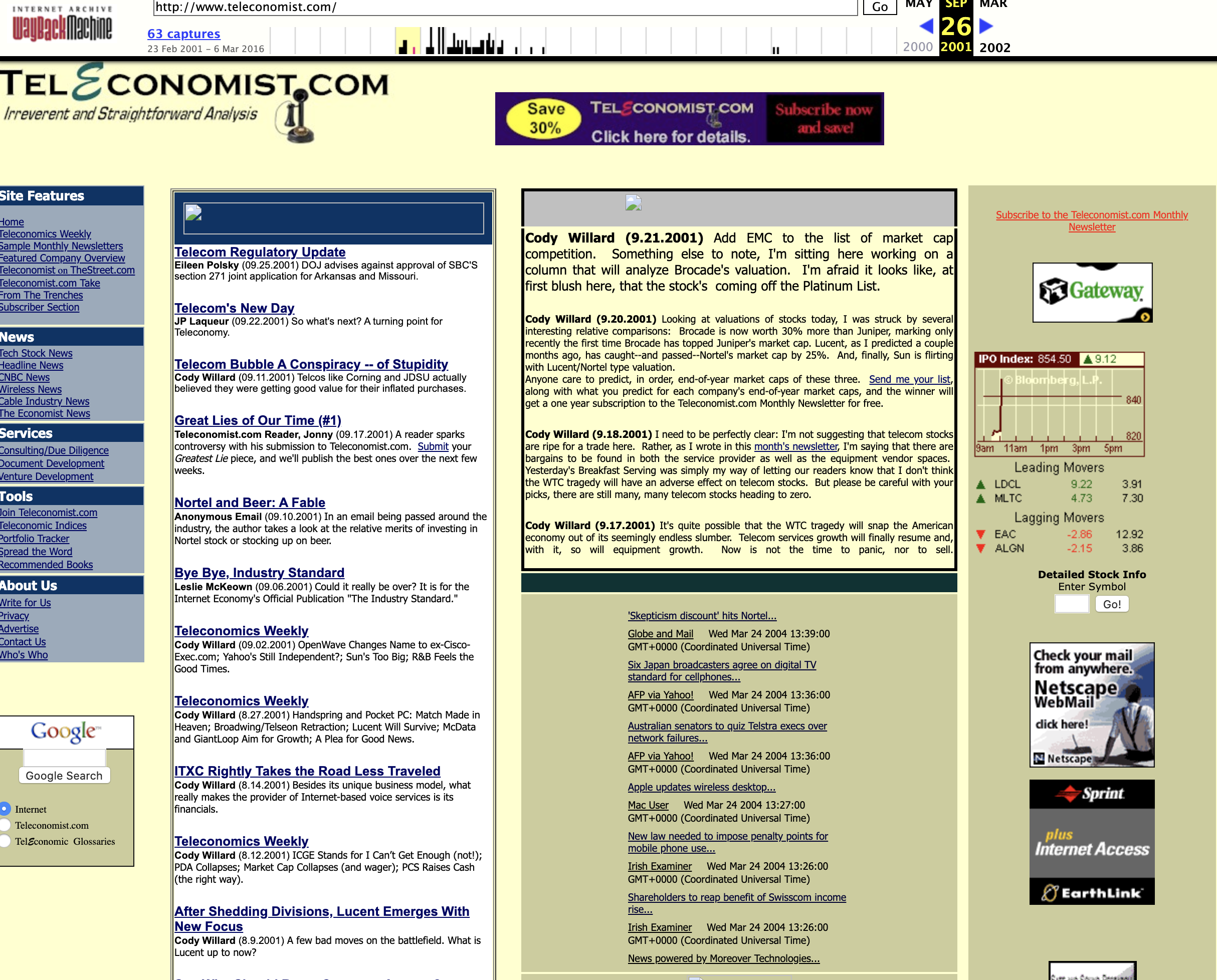 Upcoming appearance at the MoneyShow San Francisco
Why policies matter in our analysis, Gold/silver purchasing, AMD and more
Here's some helpful fundamental guidance...
More on the Seagate trade
The App Revolution will be worth trillions