For years I’ve preached that we’re not in a bubble, but it sure feels and looks like we are in one now. Is it only a matter of time before the market resets some of the valuations back down to more historical levels? Or is it possible that we are entering a new phase of valuations partly because interest rates remain near zero and/or negative in all major economies?

Remember how many times I kept explaining why the markets could go up despite the downturned economy as I did here in May:

“The best way to explain why the market keeps going up right now despite the economic despair is: The Fed’s Printing Trillions + the Government’s Borrowing Extra Trillions + Everybody’s bearish.

Q. How does it make sense that the stock market is going up when everyone is bearish?

A. The market usually does whatever makes a fool of the most amount of people.

Q. I get the feeling that I should sell everything and sit on cash, Impending doom?

A. Everybody’s bearish. Stick with our best names, but be defensive with cash and hedges. That’s what I’m doing anyway.”

Not everybody’s bearish anymore, but the trillions from the Fed and the government has obviously still worked markets higher. The markets have continued their impressive climb off the lows since then even as the bearish sentiment has succumbed to bullish greed for many investors. And sticking with our stocks, including all the names we bought more of back in the March crash, has worked out well as our stocks in particular have way outperformed the rest of the market once again. I remain steadily net long and, as I’ve said repeatedly for the last month or so, I’m mostly sitting tight right now. Indeed, sitting has been the right approach, although I admittedly wish I hadn’t trimmed and hedged as much as I did. So does everybody who’s trimmed since late March. Reminds me of the quote from the great Edwin Lefèvre, Author of Reminiscences of a Stock Operator:

“It never was my thinking that made the big money for me. It always was my sitting. Got that? My sitting tight! It is no trick at all to be right on the market. You always find lots of early bulls in bull markets and early bears in bear markets. I’ve known many men who were right at exactly the right time, and began buying or selling stocks when prices were at the very level which should show the greatest profit. And their experience invariably matched mine–that is, they made no real money out of it. Men who can both be right and sit tight are uncommon.”

Regardless, as always, we have figure out what’s the best risk/reward going forward. And I remain comfortable that sitting on most of our longs, along with some hedging a bit of our risk, especially in the hedge fund as opposed to my personal account, along with having some cash on the sheets is the right approach for now as I continue to patiently look for new names that we can invest in for the long run at reasonable valuations.

As for the market, there’s no doubt that some of the earnings, especially from most of or companies like Zoom or Amazon, have been incredibly strong. We might want to ask ourselves though, how much of the housing demand, semi demand and software/cloud demand — three of the strongest sectors in the economy — are one time actions and/or being pulled forward from future years as people make Covid adjustments? As millions of people leave cities for suburbia, housing demand is seeing at least a one time pop. As millions of people work from home, they’ve bought new computers and smartphones and upgraded their connectivity speeds. Is the market extrapolating the pull forward as a new trend line when it’s actually going to perhaps impact future demand negatively? Is the expectation that Covid is solving itself perhaps “overbought” here already. Is the expectation for a vaccine is overbought. Is the expectation that the economy is going to be strong next year is overbought?

On the other hand…I’ve also explained before that companies which have reacted quickly to the changed behaviors of a Covid economy are set up to see expanding margins in a post -Covid economy. Along with that, here’s something else — sales cycles for many companies are shrinking as online sales meetings take the place of face-to-face meetings and have become business-acceptable. Sales meetings are being done online so sales people can do eight meetings a day instead of two per day. The extra number of pitches means extra closes. Also the money these companies are saving from less travel expenses and a lower cost of sales makes them more profitable even as they might be doing more sales than otherwise.

So if the economy stabilizes here while Covid is here, what will the economy look like on the other side of the crisis? It could be really good for many giant corporations. And while I hate to type it, we have to analyze how many billions of dollar does our economy save because the people who died were mostly elderly and economically unproductive along with how many billions of dollars did the old people who have died and left their money to younger generation who are putting it into stocks or other assets or starting new businesses?

Easy answers? No. But we’ve had an incredible year without easy answers so far. Patience, sitting, cash, sticking with our longs, sitting tight, doing a little hedging, sitting still, looking for new investments, and staying seated. Lyncoln sat down and buried herself in cool fresh dirt from a badger hole in the below picture. Be like Lyncoln, stay cool out there. 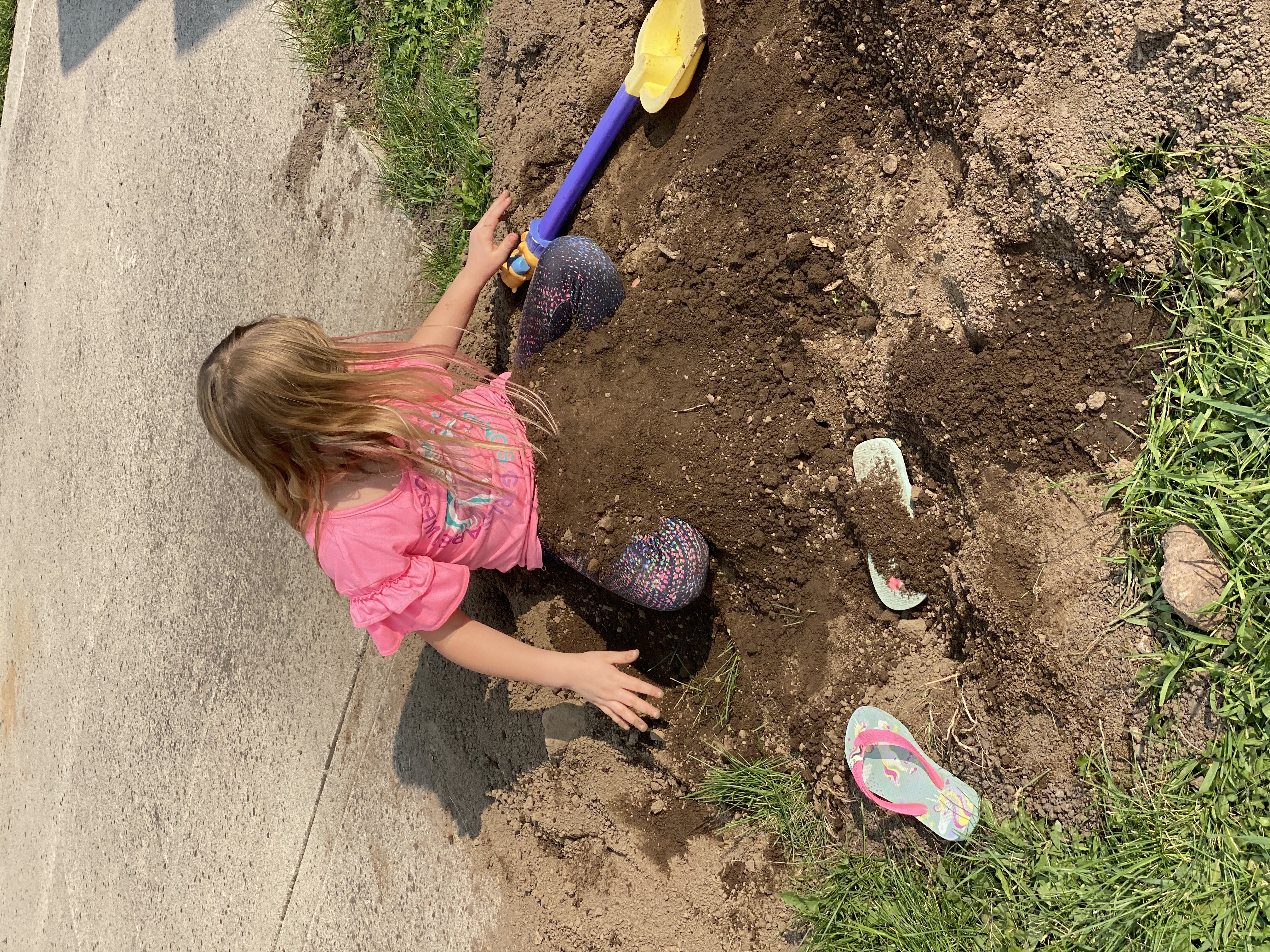 Let’s do this week’s Live Q&A Chat tomorrow (Thursday) at 2pm ET.Come directly to the TWC Chat Room or just email us your question to support@tradingwithcody.com.