Remember last week when I’d mentioned that I didn’t think it was a great time to start building long-term investments? Today is a better time as the market panicked this morning. As I’d mentioned in the Chat Room in real-time this morning at the lows, in the hedge fund I did some nibbling of some of our longs and covered a little bit of our short hedges. I didn’t do much in the personal account yet today.

CCIV, a SPAC that has been supposed to merge with yet another start up Electric Vehicle Tesla-wannabe, Lucid Motors, finally announced last night that they are indeed going to do so. And in a classic Wall Street reaction, the market “sold the news” after long-having “bought the rumor”. CCIV was up 500% from where it came public as a blank-check company and today the stock market has wiped half of what its market value was perceived to be just yesterday at noon ET. This is a stock that I’d warned everybody about last week as one of the many “Random Number Generators” (RNG) that should be avoided. People and institutions who had for weeks been buying CCIV at $40, $50 or $60 or even $70 per share have suddenly seen a huge wipeout of value. They’re now, finally maybe, looking around at their other RNG SPACs and wondering if maybe they should actually look at the valuations that they’re paying for these companies and their ideas.

Stepping back and looking at this ugly stock market action this week in a larger context, you might note that Tesla at $900 after they reported a not-so-great quarter that included some questions about gross margin growth is looking like it could have been a top-maker itself. Many crappy EV stocks continued to rally for a week or two before getting their comeuppance this week. At least for a day or two. It will be interesting to look back in a month to see what the non-TSLA EV stocks do from here — I’d bet that most of them are much lower even than today’s quotes which are much lower than last week’s quotes in the EV stocks and for much of the rest of the market.

These days everybody wants to be Cathy Wood from ARK investing. Cathy was an early bull on Tesla and bitcoin and some of the the other themes that long-time followers of mine and I got into even earlier than she did. But her actively-managed ETF has performed very well and her commentary has been spot on for a couple years now. But I have bad news, even as I am a fan of Cathy’s and wish her and her investors all the best, I can’t help but think of the story of George Gilder, with whom I’ve become friends with in the decades since I wrote this in 2001 for TheStreet.com (I just realized that this article was published just two weeks after 9/11 and was one of the very first of what became thousands of articles that I wrote over the years for Jim Cramer’s site):

“Investors need to heed a few rules when evaluating companies in their portfolio: Cash is king, as cash flow becomes increasingly difficult to judge on an ongoing basis. As such, a simple glance at a company’s balance sheet can tell you a lot about whether it’s worthy of investment. Now that the huge daily run-ups of telco stocks are gone forever, the potential rewards of any business with questionable viability aren’t worth the risk of your capital. Look for real revenue on the books. As tech guru George Gilder and his followers have learned (at least, I hope they have by now), great technology doesn’t translate into a great investment. Companies need sales channels, and they need products for which there are immediate uses. You might be surprised that I didn’t mention profitability in that list. Profitability is naturally important, but even companies like Cisco probably won’t be profitable this quarter and perhaps for several more, as they’ll have to continue aligning capacity, employees and inventory with demand.

Let me repeat the caveat here: You’ll never see the type of returns, at least in telecom and telecom-tech stocks, that we saw almost daily in the late 1990s. That’s another reason why these tech mutual fund guys, who keep preaching to stay the course, will take forever to get back to even.”

Cody back in real-time February 2021. Telecom and telecom-tech stocks never again saw the kind of returns that they did back in the late 1990s. I think the same can be said of EV stocks and many other of the favorites that Cathy Woods and her crowd of blind followers are these days plowing into as they put their money to work regardless of valuations.

“In retrospect, it’s obvious that I should’ve subtly said, ‘Hey, things have gotten out of hand at JDS Uniphase, and it’s not worth what you’d have to pay for it,'” he says. Each month, he thought about providing a warning to his subscribers, and he decided against it every time. He had witnessed firsthand what others had dubbed the “Gilder effect”: the steep spike in a stock after he added that company to his list. It wasn’t unheard of for the price of a stock to jump by more than 50 percent within an hour of a newsletter’s release. If I had said, ‘Hey, this is a top, you should all sell,’ it would’ve been a cataclysmic event,” he says. “I’d think about telling people that they should sell half their holdings, and each time I’d conclude that my subscribers would be enraged. I also wondered what I’d precipitate if I did it.” Fully 50 percent of his readers had signed up for the report at what Gilder now calls the “hysterical peak” of the market. “Half of my subscribers would have been eternally grateful [for a warning], but the other half –the new ones – would’ve been enraged because they had just come in,” he says. “It was quite terrifying. I really didn’t know what to do.” In the end he did nothing. And soon enough, he had an entirely new set of distractions to fret over. “In the past, we’d sell out our investor conferences within two weeks,” Gilder says. “But in 2001, we sent out the same literature and the same invitations, and five or seven people signed up.” He lost the deposits that were placed to reserve hotel space for the gatherings. Newsletter renewal rates plummeted. A huge tax bill came due. By spring 2002, he’d laid off nearly half of his staff.”You can be just fabulously flush one moment, and then the next, you can’t make that last million-dollar payment to your partners, and there’s suddenly a lien on your house,” he says.

Cody back in real-time again. Many of the best stocks on George’s list back at the top in 1999 ended up only going down 99% or more. Many others went to $0, even as their technologies and ideas carried on and built the Internet we all use every day now.

CCIV is likely a harbinger of more pain for those who ignore valuations, fundamentals. I leave you a shot of younger versions of Aaron Task and me from like 2005 talking on TheStreet.com TV. I couldn’t find a picture or a video from me on TheStreet before that. 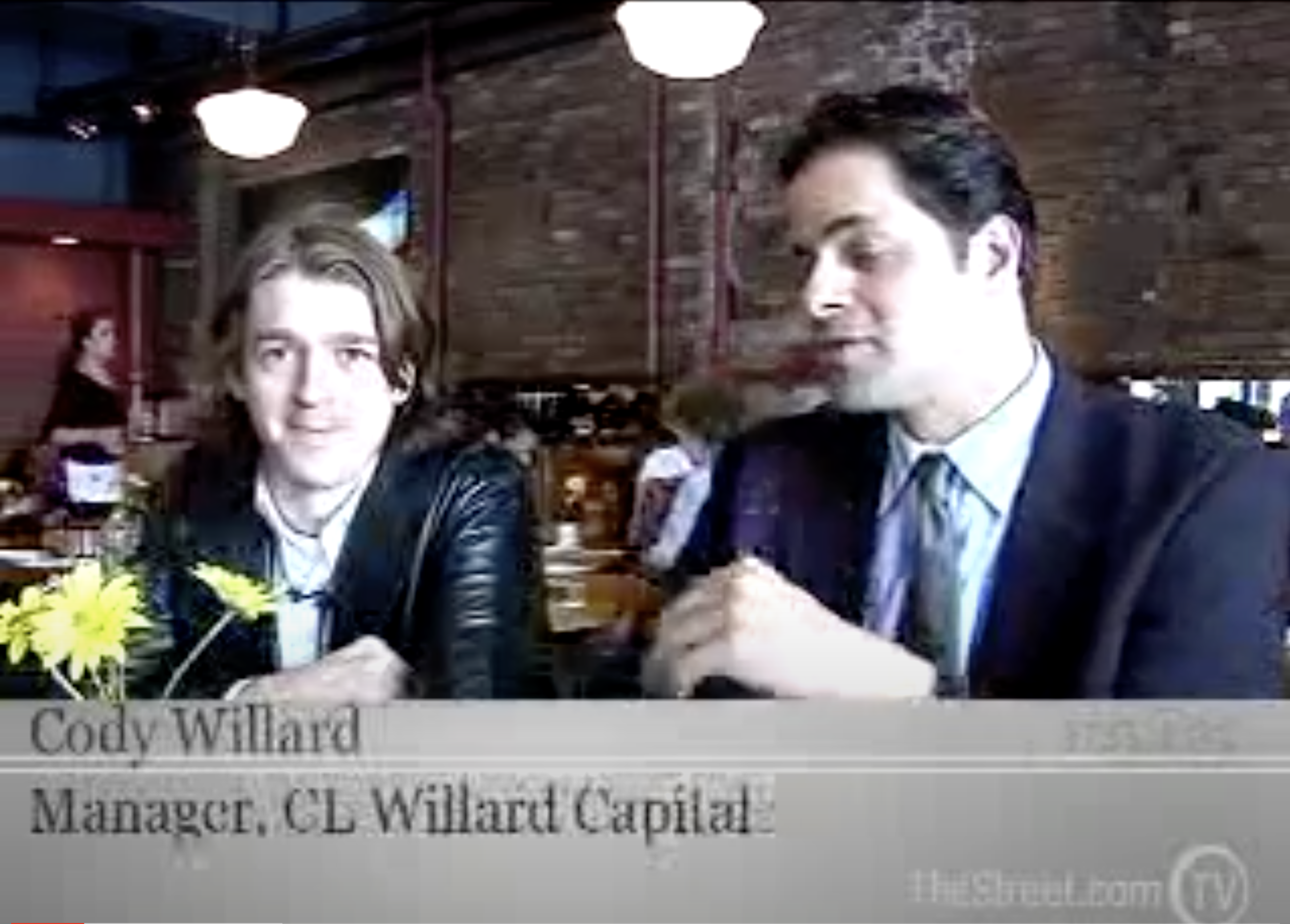 Like trying to skip stones in the tiny R...
Strategies for gambling on earnings
Trade Alert: Buying CRSP (Plus Markets Analysis)
One unmistakable pattern in the markets ...
My favorite stocks right now, long and short