You’ve probably heard about all the people who are trading stocks based on two acronyms that aren’t even that clever: FOMO (Fear of Missing Out) and YOLO (You Only Live Once). I just searched Twitter for both terms with the word “stocks” included and here’s what it found: 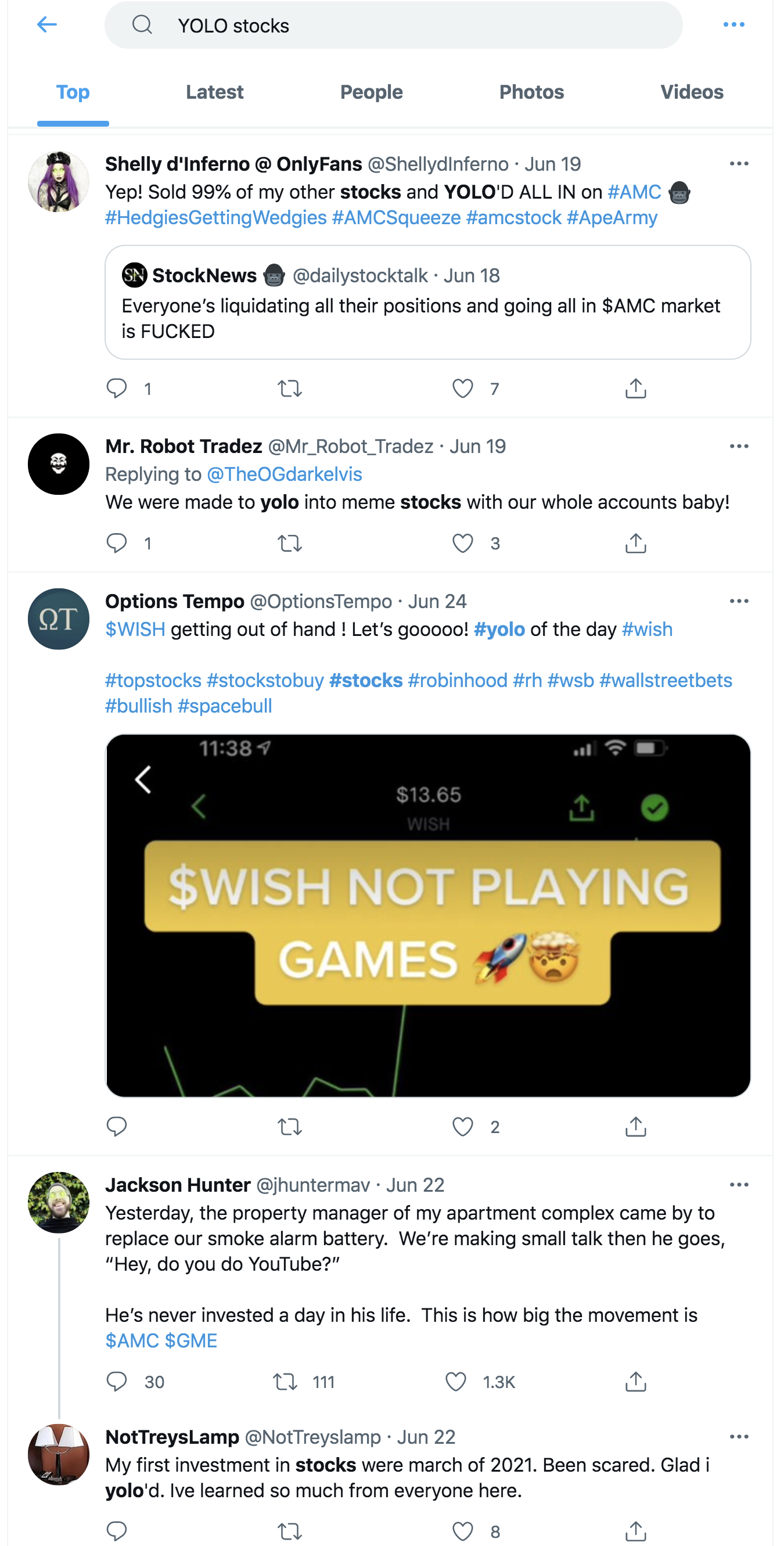 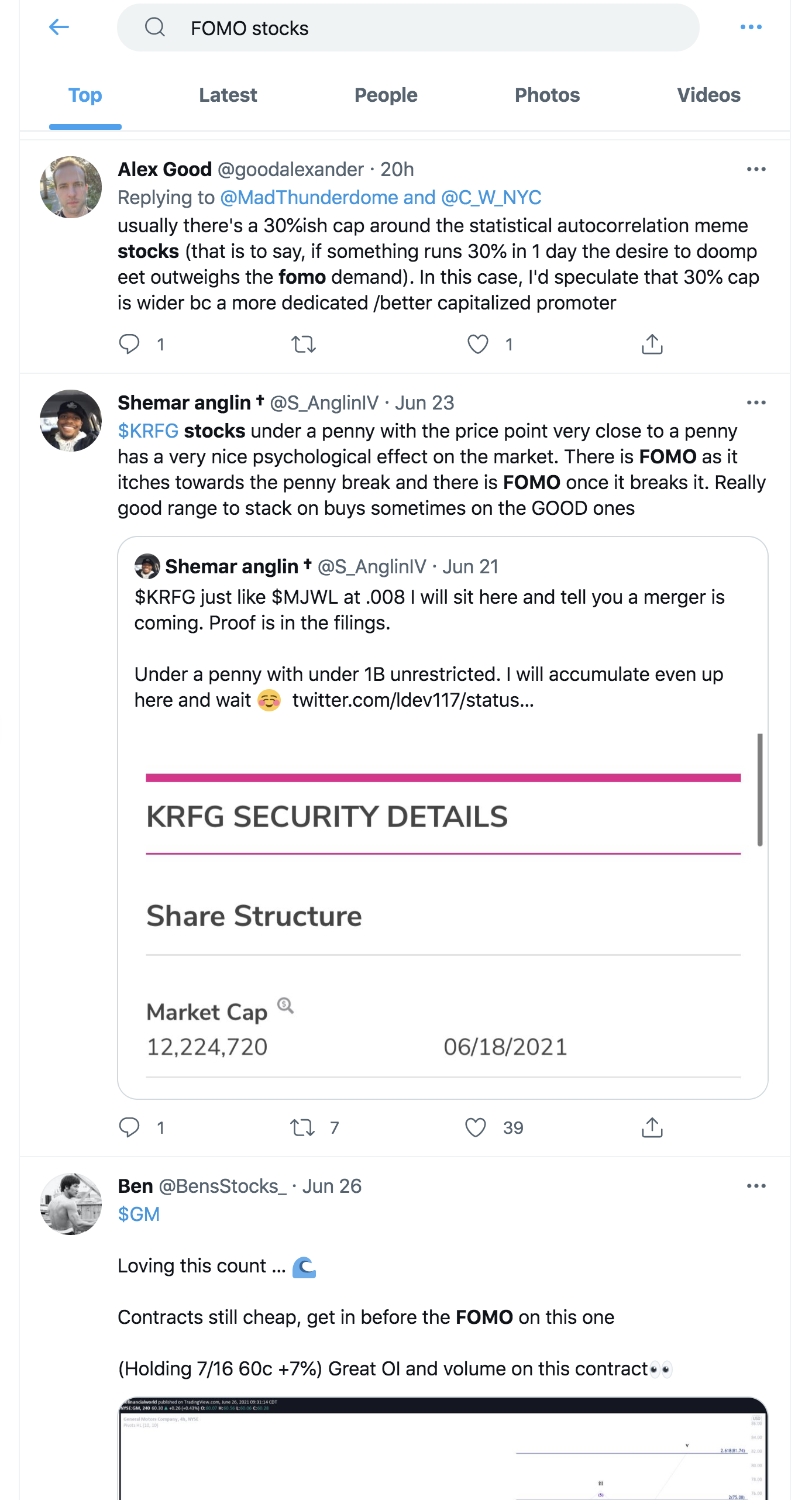 But I have a proposition for you. Perhaps in the name of Flipping It, we should consider the following two terms as much more insightful and helpful to investors and traders right now:

FOLO (Fear Of Living Once)  and YOMO (You Only Miss Out). Here’s a real story I might have told before about how things can go wrong even when you think you’re trading well and outperforming the markets seems easy.

It was late January in 2004, and I was starting my second full year of running a hedge fund and I was off to an incredible start to the year. I’d come into 2004 steadily scaling into ever larger and more aggressive positions in mostly Internet core equipment vendors like Nortel, JDSU, and Cisco, not to mention my largest position in Apple, which I’d first bought for the fund back in March of 2003 (I held that Apple along with sometimes Apple call options until I closed the fund, by the way). I’d made big money already in my hedge fund which was full of mostly long positions as the markets had been in a big rebound from their October 2002 lows.

As 2004 started, the markets were in what I called a Steady Betty Rally Mode at the time, and Internet equipment stocks were the single hottest sector into the new year. I started trimming some of my biggest winners down, including the aforementioned Nortel, JDSU and Cisco along with any stocks that were up 20%, 30% or even more as January wore on. By late January, I was nearly back up to half in cash and the hedge fund was already up nearly 25% for the year while the broader markets were barely up 5% on the year.

In the last week of January, the markets turned south and the highest-flying winners of the year, like those that I’d just sold down and taken huge profits on, were the hardest hit. I’d previously learned the hard way over the years that you should never confuse a bull market with genius, but I’d even nailed the near-term top and my whole year was already in the pocket. I was feeling pretty good about myself and my trading prowess and listening to Willie cover Woody Guthrie’s classic, “Stay a little longer” chuckling about how I’d left before the party was busted!

By early February, I was “only” up just over 20% on the year as I still had half my fund in stocks and a few options, but the markets were now down year to date and the stocks I’d so smartly sold down at the top had themselves pulled back 20-30% from their highs. They finally were stabilizing and the charts started to turn upward as the stocks were flattish to down on the year.

Here I was sitting on a huge pile of cash and feeling like a genius for having sold at the top and here was a chance to just slowly start re-building and buying some new stocks while they were down. I started to buy back a few shares and to put just a little bit of that 50% cash, along with more cash coming in, to work in the markets.

By the time March rolled around, I was back fully invested and mostly long, up single digits on the year, and the markets were down about 10% or so on the year. One morning as I walked into my hedge fund hotel office that I rented from Bear Stearns on the 40th floor in midtown NYC, I was shocked to see the Nasdaq futures were down huge. I pulled up the Bloomberg terminal and my heart sank as the headline screamed “Nortel admits fraud; Major telecom equipment vendors under investigation” or something along those lines. Nortel was cut in half and most every Internet equipment-related stock in the market was down 20% or more on the day. I puked my guts out that whole day and cried myself to sleep that night.

I spent the rest of the year digging out of that hole and getting back ahead of the market and had a lot of success in that hedge fund from that bottom. Lesson of the week – do not dig yourself a hole, okay?

Here’s something I wrote in 2007, the last time I started turning from bullish to bearish and eventually traded my hedge fund for a TV gig right before the markets started tanking in late 2007.

I’m worried. That’s no news flash, as I’m always worried, but I am really concerned about the complacency out there. Earnings are great, as evidenced by the booming season we’re experiencing. The global economy is lifting a lot of boats. And every time I try to get bearish, I feel almost silly when the action, fundamentals and environment are this strong.

Just about everybody is long real estate. Ask around, and people will tell you that real estate is a “local” market, so if you’ve bought in the right area, the possibility of taking a big hit is remote. The bulls might cite New York City’s still-very-strong real estate market to underscore this point. I might point out that the “safe” areas are probably next to get hit. Ah, but they’re not making more land, after all, the bulls reply. Wasn’t almost every rationalization for why we shouldn’t fret about any real estate bubble true when real estate crashed the last few times?

Last month, the IMF reported that “the global economy remains on track for robust growth in 2007 and 2008. … Moreover, downside risks to the outlook seem less threatening than at the time of the September 2006 World Economic Outlook.” Has the IMF ever gotten the outlook right? Seriously, if the people who come up with that bureaucracy’s economic outlook were any good, they’d be working somewhere besides a bureaucracy. Think I’m joking? Let’s look at the September 2002 World Economic Outlook, in which the IMF states, “The recovery is still expected to continue, but global growth in the second half of 2002 and in 2003 will be weaker than earlier expected, and the risks to the outlook are primarily on the downside.” But 2003 was a pretty amazing year of recovery –not exactly “weaker than earlier expected,” that’s for sure.

This utter disregard for risk permeates the sell side, too, as evidenced by this broker note from Bear this morning: “Worries — the market is running out of major concerns (inc. subprime — despite GMAC just posting a $900M+ loss in its ResCap biz in Q1, the yen carry trade, the weak dollar, weak earnings, etc).” The italics are mine. Not surprisingly, I suppose, I’m going to flip that statement as I find I have more major concerns about the market and economy today than I’ve had at any point in the past five years. Indeed, with risk premiums at all-time lows as measured by corporate bond spreads, the endless new highs in the stock and bond markets around the world, and the global boom going on, I think some serious risk exists.

A Citi board member recently told me that I had a “lot of guts” for having launched a tech fund in October 2002. I think you’d have to have a lot of guts to launch a tech fund in May 2007! I’m focusing more on the short side than anything else right now. More names to come.’

Cody back in real-time 2021. I’m not saying the markets are about to tank like they did in 2008. But I am saying, once again, that I know way too many random hard-working, often blue-collar, people who are convinced that they can make big money in cryptos and meme stocks and by trading, trading, trading.

And all my analysis points to an unfortunate risk/reward set up for the aggressive bulls here.

I’ve been in this business, picking stocks and helping people manage their money for twenty five years and it seems obvious to me that trading and investing and making profits and keeping those profits is very hard to do over many years. There are times it seems easy. That’s often the best time to get cautious. Because if it really were easy, nobody would work their real jobs. We could all just trade stocks to each other all day and make all the money we need. Yeah, right.

I have a new name or two I’m digging hard into this week, one in AI and another that’s trying to Revolutionize long-term gig employment trends. I’ll send out a Trade Alert if and when I decide to pull the trigger on either. Until then, I’m staying steady as she goes for now with my cautiousness even as so many others think YOLO and FOMO are just fun little acronyms.

We’ll do this week’s live Q&A Chat at 1pm ET Wednesday.  Join me in the TWC Chat Room or just email us your question to support@tradingwithcody.com.