Here’s the transcript from this week’s Trading With Cody Live Q&A chat.

Q. Before you would speak of tranche buying, where building up positions were done in 2-4 purchases. I haven’t seen you use that term in a long while. Everything now are nibbles. This despite your even larger positions changing significantly, Ie Uber and Gld. This is a big part of people’s confusion on how large or aggressive to be buying your recommendations. Can you be a little more descriptive regarding your aggressiveness into and out of your positions, especially the larger ones? Thanks.

A. Sure, good points and I’ll do so. This market, for the last two years, has been “different” than the markets typically were for most of my career and I’ve adjusted my trading style a bit because of that over the last two years too. I can be more detailed in my Trade Alert posts though.

Q. Cody, you said markets are “different” the last two years from most of your career. Would you mind elaborating a little on that? Thanks!

A. Lots of ways, but the two clearest examples to shine a light on why/how the markets were different the last two years than for most of my career would be these: 1) In 2020, the crappiest stocks with the WORST fundamental went up at least if not more than good companies with good fundamentals. 2) In 2021, almost all of those stocks crashed 70-90%, yet the broader stock indices went up double digits.

Q. Feet-to-fire, which would outperform for this year, growth or value?

Q. SPCE is down 11% after issuing convertible bonds. What does this likely mean for the stock going forward? Is it time to exit this position or hold steady?

A. I can’t believe these guys didn’t raise $500 million by doing a secondary offering back when the stock was at $50s and $60s and I kept writing about how they should raise 1/2 billion while they can. Now, they are doing it with the stock down 80% from where they could have and should have done the raise. I wrote this on Monday: “What a mess this stock and company are. This is a tiny position for me and I’m not looking to add more to it any time soon.” I mostly own this thing because it’s Space and it’s in NM and I will hold a tiny position steady but not looking to add to it. These guys have not been executing.

Q. Where would you be a buyer of BTC?

A. I nibbled a little bit late last week for the hedge fund. I’d be more aggressive about buying it on its next leg down if it does so. Maybe low to mid $30,000s.

Q. What do you think of $COIN valuation at this level?

A. I don’t like how they’re pricing has to come down because of competition from Robin Hood et al. Great company though.

Q. What are your thoughts about investing in NFTs?

A. I’m concerned about the lack of scarcity in the NFTs industry by its very nature. Still learning more about it though and am open to the idea.

Q. Cody, thanks for the QCOM recommendation. I bought a ton at $134 months ago and just recently sold it. Was going to sell at $138 but your message that you predicted it might go to $200 by the end of the year made me some money. Go LOBOs!

A. Rock on. I still hold a pretty decent-sized position in QCOM by the way. And speaking of Lobos, check out this poster we found when we were moving offices. I think someone handed it to me when I was walking up the ramp after a blow out loss on ESPN back when I was a walk on for the Lobos hoops team in the mid 1990s. My mom kept it all these years at her house and gave it to me and I just found it again. 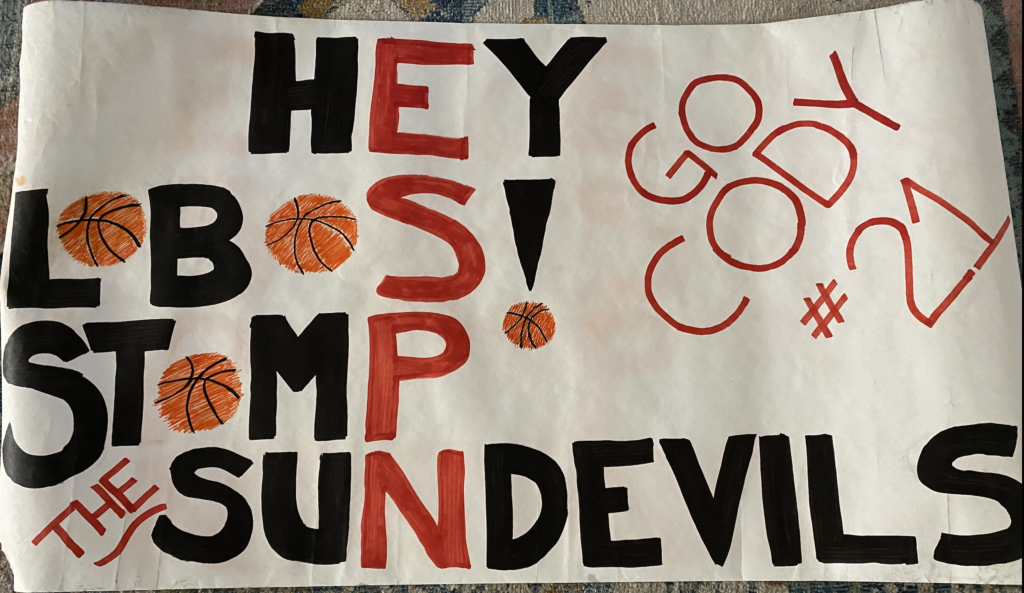 Q. Cody, in your last update you mentioned a VTWO short hedge and rated it a 7+. Is there a reason you would favor this over VTWG, which is dedicated specifically to short cap growth names?

A. I like the idea of shorting both a little bit of VTWO and VTWG now that you mention it. I don’t have a VTWG short on yet, but I might short a little bit of it if it rallies hard here near-term. Thanks.

Q. Dear Cody, thank you very much for your expertise. What do you think about LICY? I found it very intriguing as it is the only company I am aware of that is in the LI-Ion battery recycling business. Morgan Stanley and piper already have coverage with target prices ~68% above the current level.

A. Looks interesting and clearly battery recycling is going to be a growth industry for years to come. Revenues are just a few millions dollars right now and that should jump to the tens of millions next year. But the company will operate with negative gross margins for a while here. Trading at 30x sales, it’s not cheap either. I’ll keep an eye on it.

Q. I’ve had some money in Village Farms since you first mentioned it. Yes, because of the pot angle but also because I’m an old tomato farmer from way back (lol). Despite buying their products every week (tomatoes) is this a position to liquidate for cash? Thanks, Craig, two time Ruidoso speeding ticket holder. Words of wisdom…Don’t speed in Lincoln County!

A. Haha, yea, the cops in Lincoln County have been legendary since the days of Billy The Kid. I just mentioned VFF in a Q&A Chat like this and I don’t own it and don’t know it well enough to help you. Sorry.

Q. You said Immersed would send out an update the beginning of January but I’ve not seen anything.

Have a great weekend. Thanks for the questions, rock on!

Two big earnings reports tonight
How much cash? Is there a crash coming? PLUS the real story with the GOP tax plan
Show links, Markets, Trade ideas, Elon Musk, & The Great Crypto Crash continues
Today's live Q&A chat will be rescheduled for this Friday at 4:00 p.m. ET
Revolution Investing Links: Groupon Is Doomed and Hating on the JOBS Act