By numbers. By mirrors. By water.By dots made at random on paper.
By salt. By dice.By meal. By mice.By dough of cakes.By sacrificial fire.
By fountains. By fishes.Writing in ashes.Birds. Herbs.Smoke from the altar.
A suspended ring or the mode of laughingPebbles drawn from a heapOne of these thingsWill tell you something.
Let’s tell the future

Here are some markets, economy and stock predictions for this 2023. I’ve spent the last year and a half or so being defensive and cautious and warning how the 12-year long Bubble-Blowing Bull Market that we’d ridden to great profits was over. The Bubble-Blowing Bull Market probably ain’t coming back any time soon, but we just might be seeing the markets and economy morph into something a little bit healthy for a while. That would be unexpected, I do believe in a world where nearly 90% of CEOs and analysts are predicting hard times ahead for the economy. The markets and the economy are not the same, of course. Remembering that is always important. Anyway, onto some the predictions and commentary.

1) It’s just possible that the huge leap forward in productivity per worker that ChatGPT and its AI ilk will unleash on corporate earnings and the GDP will rival what spreadsheets, word processors and the internet did over the last thirty years. Except this productivity gain will happen over the next 3-5 years instead of over a span of 30 years. Corporations will be more efficient and effective in handling their customers, their programming, their legal costs, etc. That huge enhancement of productivity will be a big theme that some economists will be talking about by the end of next year and that every economist will recognize in 2-3 years as corporate margins and GDP growth in 2024 shock to the upside after 2023 wasn’t so bad either. ChatGPT is just a few weeks into this beta release and will get much better in coming months and years. Other AI programs will be released from the likes of Google, Microsoft (which is also an investor in ChatGPT), and others over the next year that will blow people’s minds too.

2) Aren’t we already in a recession? I mean, there was that whole debate a few months ago about whether or not two consecutive negative growth GDP numbers were or were not a recession. Certainly, the tech industry and the real estate industries are in their own recessions. Anyway, 2023 just might turn out to be a much better economic year for the US as it remains the cleanest and most innovative shirt in the global economic laundry basket and there are two factors that will likely help the US economy in 2023 — the aforementioned ChatGPT/AI economic productivity enhancer and the re-opening of the China economy (as long as Covid doesn’t force them to re-close and/or accelerate to wildly overwhelm their health care system. By the way, a decent goldilocks-y US economy with flattish corporate earnings growth/decline with increasing margins throughout the corporate world would probably be the single most unexpected outcome for the US economy in 2023.

3) By the middle of next year, it’s likely that the current employment depression in tech/software engineering jobs will have bottomed and by 2024 the demand for such talent will be back on the rise.

4) Meanwhile, the operating margins will expand more than any analyst is currently modeling for 2023 at companies like Meta and Amazon and others in the tech space that have cut jobs and luxuries from the last few years as the Bubble-Blowing Bull Market fueled such excesses at all these tech companies. FANG and mega caps actually have a pretty good year in 2023, with most up 10-15%.

5) The Fed won’t cut rates but they will keep them near 5-6% for most of the year. They won’t have to if the US economy will stabilize and start surprising to the upside by year end even with rates at a new normalish level of 5-6%. It’s okay and frankly quite healthy for people to be rewarded for saving money in a bank or lending to a government. A healthy economy could and would grow in such an environment. As someone who has lived through endless Fed-driven bubbles and crashes during my nearly 30 year professional career, I’d find it quite beautiful if we could have a normal growing economy with near-natural interest rate levels for a few years.

6) Inflation will bounce around month-to-month with more volatility than we’ve seen in decades. One month it might be 2%, a couple months later it might be 4.5%, and we might get a few months over 5-6% if oil, gas and/or supply chains get clogged or something like that happens for a few months or something. It won’t come back down to the Fed’s 2-3% goal on a moving average but it will trend that way. The Fed won’t be compelled to cut rates, as noted above, but that just might not matter anyway for corporate earnings or the stock market…

8) So, the stock market is flattish next year. The DJIA will be down 3-5%, the S&P 500 will be flattish and the Nasdaq will be up 5-10%. Small caps will be wild to watch, as there are hundreds if not more than a thousand small caps (and a few stocks that are still mid caps and/or large caps, of course) that are headed that will run out of money and are headed to zero next year. But with the huge sell off in 2022 that we saw in all speculative small cap stocks, taking almost all of them down 70-99%, some will come back and will be up 10-20x. Overall, I’d expect the IWM small cap index to underperform even the DJIA.

9) Oil drops to $50 or $60 a barrel and sticks around there most of the year as OPEC+ members start over-pumping and and the US continues to grow its own supply too. That would also be a boon to the rest of the US economy, though it would mean that a lot of earnings expectations for energy companies would have to come down and a lot of energy stocks are probably overpriced right now.

A few trades to mention to end the year:

I am selling my LLAP to lock in a tax loss. I might revisit it next year but really we need to mostly just wait for the batch of very good private space companies, including Relativity Space and Axiom Space, to come public in the next 2-5 years. I’m holding onto RocketLab as I just can’t believe that companies like Boeing or countries like the UK wouldn’t just love to have their own orbital launch capabilities and they would buy RocketLab, and pay a huge premium, for less than $5 billion right now.

I bought some Docusign. They might end up with lower churn and higher margins in coming years and the company is quite sticky with their revenue model anyway. More on this one later. Starting small, as always.

Thank you to each and everyone of you for being a part of Trading With Cody. Happy New Year!

I leave you all this year with a shot of the sunrise yesterday morning, which my daughter Lyncoln made sure both her mom and I saw. It was a beauty. 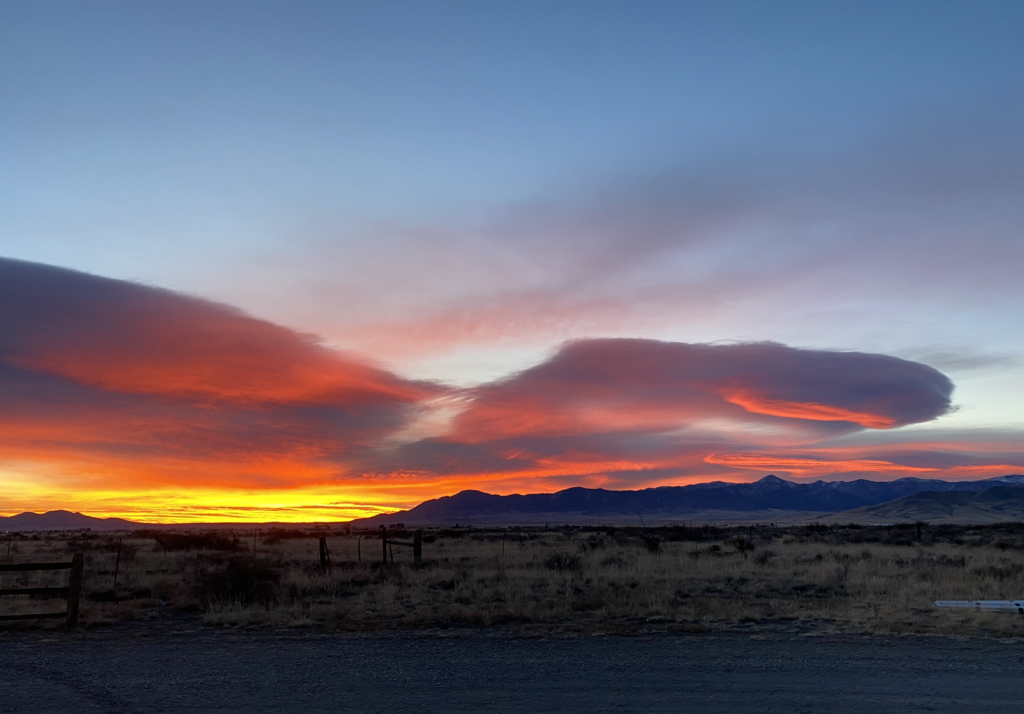